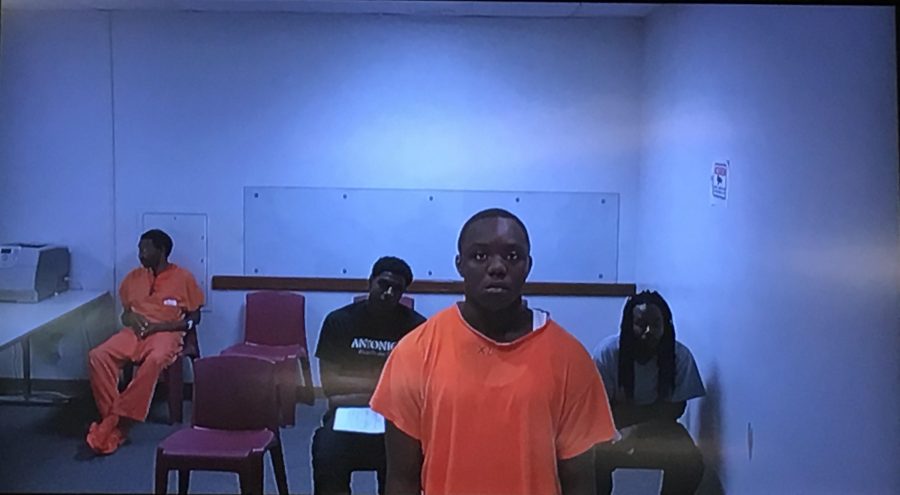 Robbie Patton, the 18-year-old being charged with first-degree murder for the death of George Korchev on Sept. 25, had his preliminary court hearing Tuesday at 2 p.m. He pleaded not guilty.

Champaign Police Department Detective David Allen was called to the stand and testified about the events of the shooting, starting with what happened outside of the apartment party.

He confirmed that the party took place at apartment 6 of 306 Green St.

“The fight started in the south side of the parking lot and ended before (reaching) the sidewalk,” he said. “There were five individuals present, attacking a separate victim, Edwin McCraney, who suffered a concussion and wounds to the face.”

Surveillance from the tobacco store next to the apartment and University cameras show Patton at the scene of the crime, Detective Allen said.

He said that in the video the suspect takes off a baseball hat, pulls his hood up, sinches it around his face and reaches for something at his waist.

Though Patton’s face isn’t completely visible, Allen said they were able to identify the shots being fired from where the defendant is seen running away.

However, neither the weapon nor the shell casings were retrieved.

Patton’s defense lawyer argued that there were other fights that evening and that the only evidence available is through surveillance cameras. He said there was no cellphone footage, so identifying Patton as the shooter is more difficult.

Allen refuted that statement by saying 40 witnesses have been interviewed and that of the ones he has personally interviewed, at least two witnessed the gun being shot.

The defense lawyer argued that the description of the shooter given by the witnesses is too vague to actually prove that it is Patton.

He said, “The description given was ‘a black male wearing all black with a hood up.’ No description of his facial features or body were given.”

Allen said that the witnesses have been able to identify the shooter as Robbie Patton, despite the lack of physical description. The prosecuting lawyer said that the purpose of this hearing is to determine probable cause.

“There’s eyewitnesses who have been able to identify the defendant. There is video surveillance. I believe there is probable cause,” he said.

If the defendant decides to post bail, he is still responsible for being present at the trial; if he does not show up, he will be convicted, Judge Olmstead said.