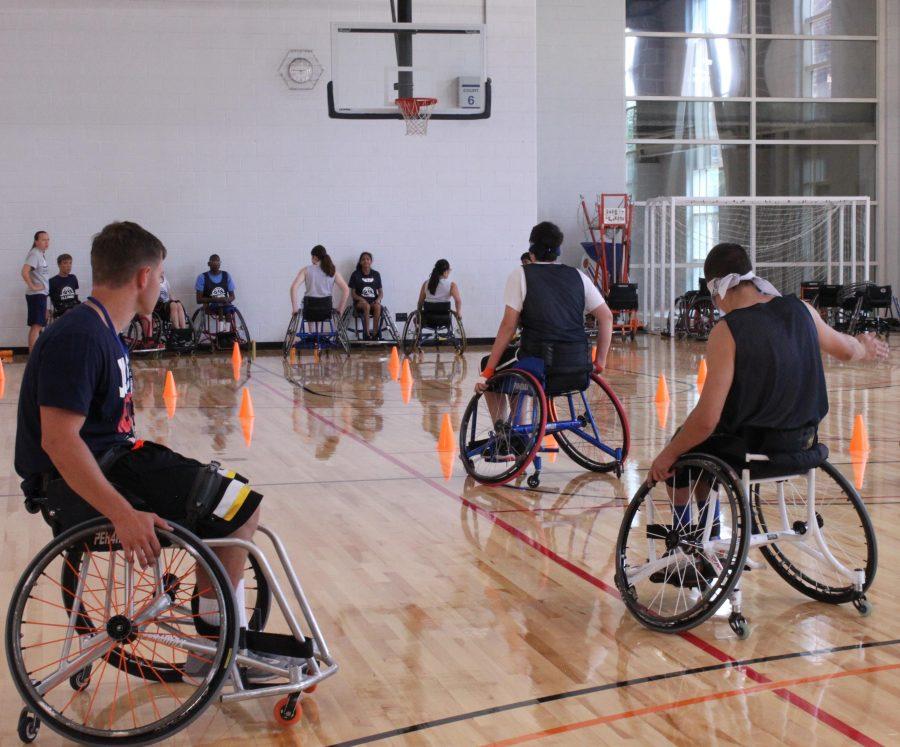 Prior to the Illinois men’s wheelchair basketball team’s first game of the season, Martinez Johnson and Collin ‘Turtle’ LaFon were gathered around each other in the Activities and Recreation Center early in the morning with a notebook and pencil in hand. They quizzed each other and asked follow-up questions to clarify the material.

Head coach Matt Buchi tested his team in a series of multiple choice, matching, fill-in-the blank and short answers questions on Illinois’ goals, strategies and principles. Some of the questions were conceptually based, such as “What is a 180 degree player?” and “Give an example of when you were a sheepdog (leader)?”, while others were more straightforward.

On some of the multiple-choice questions, he said he gave two outlandish options. If a player answered such questions incorrectly, he would take note.

After spending 10-20 minutes on the exam, the Illini headed back out to Gym 1 to prepare for its season opener at Minnesota State University. The teams play two games on Friday and Saturday.

“We’ve been talking a lot about it,” Buchi said prior to refereeing his team’s third scrimmage on Tuesday. “But talk is cheap.”

The team will start off its circuit at Minnesota State with games against the University of Nebraska Omaha and Missouri on Friday. Illinois will then play Wisconsin-Whitewater and Southwestern Minnesota State the next day.

But for some players, they are focused on one game in particular.

“Our vision is always Whitewater,” junior Spencer Heslop said. “They are our biggest rivals. That’s our goal: Beat Whitewater.”

Whitewater has long been rival of Illinois, as the Wisconsin team is often one of the best in the nation. The team is also known for having vocal players.

But to win any games in Minnesota, freshman Tim Culberston said it will come down to execution.

“I’m looking at how we set up our offense,” Culberston said. “We have a couple times where we rush it and don’t intend on following the plan.”