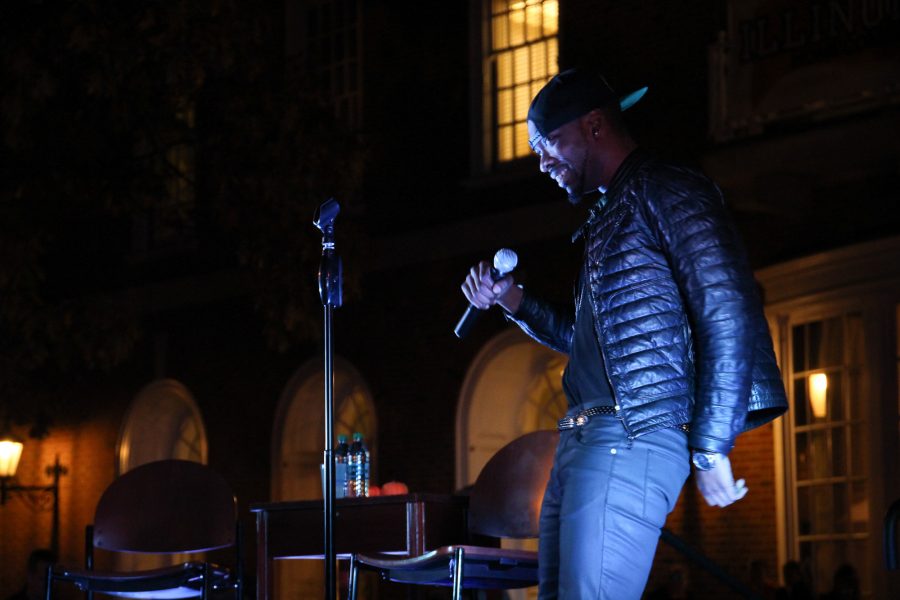 Jay Pharoah performs standup in front of the Illini Union as part of the Univeristy of Illinois Urbana-Champaign’s Homecoming 2016 Week Comedy Show on Tuesday, October 25, 2016 in Urbana, IL.

From his time on Saturday Night Live to Rihanna and Drake’s relationship, Jay Pharoah addressed a wide array of topics on Tuesday night. He spoke to a student crowd at Anniversary Plaza as part of the Illini Union Board’s Homecoming Comedy Show.

During his stand-up, Pharoah made sure to address the 2016 presidential election.

“Whether you agree with (Hillary Clinton’s) policies or not, she’s a woman running for president, and we’ve never seen that before,” Pharoah said.” “That’s dope.”

Illini Union Board representatives introduced Pharoah while on a stage constructed for the event. However, upon his entrance, Pharoah immediately jumped off. He wanted to get closer to the audience, which is where he stood for the duration of his routine.

In addition to his notable Jay-Z and President Barack Obama impressions, music dominated his routine. He impersonated Eminem and Kanye West for their unique rapping styles. Pharoah also performed his own rap number, which received high praise from the audience.

The process of bringing Pharoah to campus first started last homecoming for Union Board Vice President for Programming and senior in AHS Isabel Kadiri. Students requested a big comedian come to campus for homecoming.

“That’s one thing we definitely made a focus as soon as homecoming was over last year: working on ways we could really implement student feedback and input into one of the most celebrated times at Illinois,” Kadiri said.

While best known for his his time on Saturday Night Live, Pharoah left the show in August. He’s currently working on a Showtime pilot White Famous alongside fellow comedian Jamie Foxx. The project centers on a black comedian balancing his personal identity while breaking into mainstream media.

“We think he’s absolutely hilarious from his impressions to his jokes, and just being an overall funny man,” Kadiri said. “We thought he would be great to bring to campus.”

As part of the University’s homecoming celebration, the comedy show served as Tuesday’s main event. Upcoming events include a three-night concert series at the State Farm Center featuring Dierks Bentley, Pentatonix and The 1975. For a full list of events, check out the homecoming schedule.