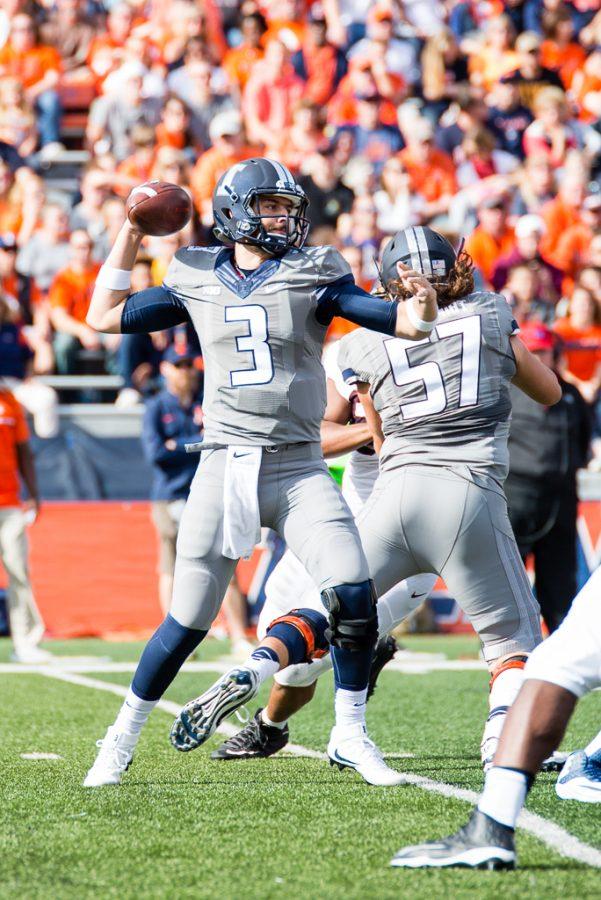 Illinois quarterback Jeff George Jr. (3) throws a pass during the first half of the game against Minnesota at Memorial Stadium on Saturday October 29. The Illini are losing 14-7 at half.

While it was supposed to be an exciting day for both fans and players alike, Homecoming turned sour for the Illinois football team before the first quarter even finished.

Later in the quarter, George threw the ball to a wide open Malik Turner. The receiver immediately turned up field, only to take a helmet-to-helmet shot from Minnesota defensive back Duke McGhee. The hit was immediately ruled targeting, and after a short review, the call was upheld and McGhee was ejected from the game.

But while that was happening, Turner lied motionless on the field after the hit. The Illini training staff brought out a stretcher for him, and he was carted off the field. He showed signs of movement on the stretcher, but as he was driven off the field, he had both his hands on his helmet.

The play took the life out of Memorial Stadium, and the team couldn’t put any solid plays together for the rest of the game.

“It was terrifying,” wide receiver Zach Grant said. “It was emotional. Especially with a kid like that who works so hard, it is hard to see a tragic injury like that.”

Turner was in the locker room with the team after the game, but with him out, the Illini passing game became almost nonexistent. Entering the game against Minnesota, Turner accounted for 43.3 percent of the Illini’s total receiving yards.

In George’s second career start, he threw for 156 yards and one touchdown – an improvement from his four-completion, 95-yard performance last week against Michigan.

“Offensively, (George) did some things better than the week before,” head coach Lovie Smith said. “But he was under a lot of pressure, and we were never able to get our running game going, which hurt us.”

George struggled with turnovers: He fumbled his first snap of the game, got tackled for a safety and fumbled again in the red zone.

The Illini running game was tasked with picking up the Illini offense. Running back Reggie Corbin led the Illini with 83 rushing yards.

Ke’Shawn Vaughn left the game in the fourth quarter with an apparent foot injury. Before that, Vaughn ran in his third touchdown of the season and first since the second game of the season against North Carolina. He finished the game with 34 yards and one touchdown.

The Illini tried to make a comeback in the third quarter when George connected with wide receiver Zach Grant for a touchdown, cutting the Gophers’ lead to seven. The touchdown was Grant’s first of his five-year career at Illinois.

“It is a special feeling,” Grant said. “I have been waiting for it for a long time. It has been a while since I have been in the end zone, so it was a special moment for myself and my family in the stands.”

The Illini defense struggled to contain Minnesota running back Rodney Smith, who ran for 100 on 20 carries and scored two touchdowns.

The defense forced a few three-and-outs in the second and third quarters. The Gophers scored only seven points in those two frames, but scored 33 in the first and fourth quarters combined. In the end, Smith said that his team shot itself in the foot a few too many times.

“That is not how you want Homecoming to go,” Smith said. “Part of a great Homecoming weekend is the football team winning the game. But it is hard to win when you start that way. We put a big emphasis on getting momentum early in the game, but those turnovers early in the game put us in a hole, and when you are not a good football team yet, it is hard to overcome adversity like that.”