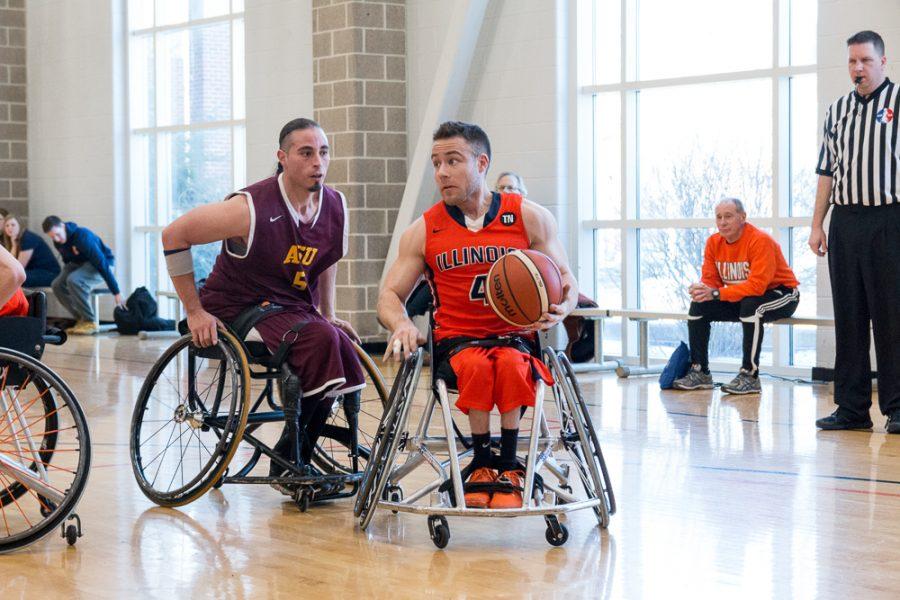 Illinois’ Ryan Neiswender dribbles to the basket during the game against Arizona State University at the Activities and Recreation Center on February 13. The Illini won 69-43.

After the Illinois men’s wheelchair basketball team defeated Southwestern Minnesota State University, the Illini scrambled to the other side of the gym to watch rival Wisconsin-Whitewater play Missouri.

Illinois saw the last five minutes of the game between Whitewater and Mizzou. The game foreshadowed the highly anticipated matchup between Illinois and Whitewater later that day, which turned out to be a nightmarish end to the tournament for the Illini.

Illinois entered the game coming off a 4-0 start in the trip to Wisconsin. Three of those games were won by double-digits behind a 50-plus field goal percentage.

“We didn’t lose a beat on defense when we had subs come in,” Spencer Heslop said before Illinois’ game against Whitewater. “If we can have lockdown defense, that is what’s going to win us ball games.”

Heslop and Neiswender entered the game after having averaged a combined 33.2 points. Their scoring pace continued with a total of 29 points in the fifth game, but Illinois’ defense ultimately crumbled in its 59-50 loss to Whitewater.

The game started off tight with Illinois leading, 19-14. Illinois was hitting their shots and holding Whitewater’s two main big men, Christian Seidel and David Flemming, out of the paint.

Then, Whitewater shifted its game plan. Its defense suddenly picked up. They pressed the Illini’s offense in transition and double-teamed Neiswender.

At one point, he was trapped at the left corner between two Whitewater defenders. He didn’t have enough room to pass the ball, so he was forced to call a timeout in a pivotal play in the game.

After the Illinois timeout, Whitewater went on a 25-3 run that carried from the end of the first half to beginning of the second. Seidel and Flemming scored more than half of their team’s points in the stretch.

Though Illini responded with an 11-0 run, it was too late. All of Whitewater’s big men were getting open looks under the basket. Illinois was struggling to do the same.

It sparked ire and frustration from the Illini, as players were throwing up desperation shots.
Whitewater shot 77.1 percent in the game. Seidel went 11-12 with a game-high 25 points. Illinois shot 43.4 percent and was led by Neiswender’s 15 points and 10 assists.

It is the Illini’s second loss the Warhawks this season. Illinois moves to 8-4 overall on the season, and their next games are Jan. 13-14 in Wichita, Kansas.