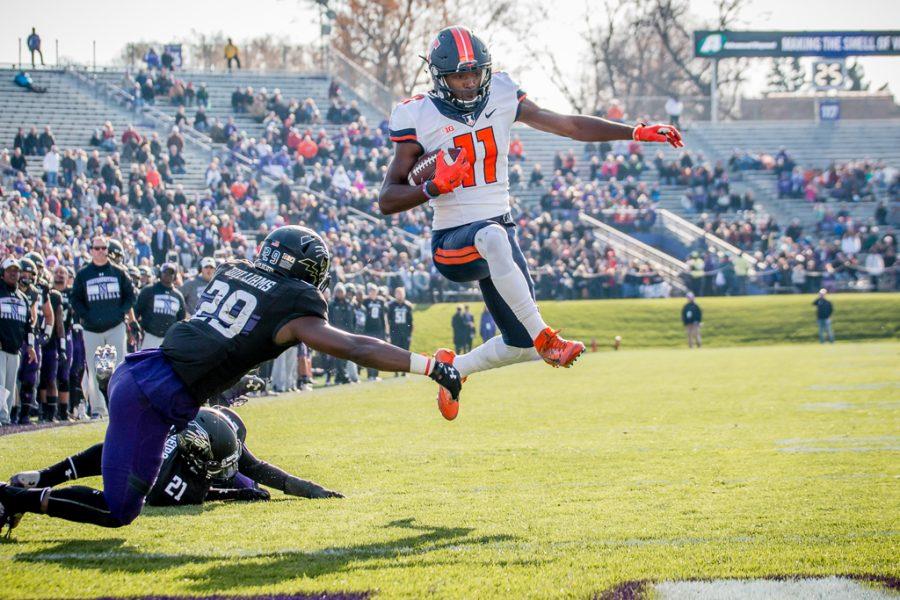 Illinois wide receiver Malik Turner (11) jumps over a tackle on his way to the end zone during the first half of the game against Northwestern at Ryan Field on Saturday, November 26. The Illini are down 21-14 at halftime.

Illinois couldn’t play spoiler to the team up north.

In its final game of the season, Illinois was outplayed on the road en route to a sloppy 42-21 loss to Northwestern

The win was the Wildcat’s sixth of the season, making them bowl eligible. The stakes were similar last season when Illinois needed a sixth victory to extend its season but lost to halt any chance at a bowl.

There was no revenge this Saturday.

“We did a lot of things that teams that lose do in the end,” head coach Lovie Smith said. “But getting down 21-0, the guys fought back. It’s been that way throughout

The Illinois offense dug itself into a deep hole that it couldn’t climb out of in the end, punting on its first four possessions and fumbling on its fifth to fall behind 21-0 in the second quarter.

Senior quarterback Wes Lunt wouldn’t go down without a fight in his final game as an Illini, though, and led two consecutive scoring drives to close out the first half with Illinois trailing by just one score. The Illini racked up 161 on those two drives alone.

Junior receiver Malik Turner scored the first Illinois touchdown since the Michigan State win with a 19-yard catch and run, and sophomore back Reggie Corbin scampered in for an 8-yard score on the ensuing drive.

“Down 21-0, we needed to put points on the board, we needed to move the ball,” Smith said. “Takeaways took away from what might have been a great finish for the guys to really remember.”

Lunt led the Illini down the field once again on their opening drive of the second half, but Corbin coughed up a fumble on the Northwestern 8-yard line. The Wildcats scored on their ensuing drive.

Even though the Illini hung around throughout, key mistakes in the second half — such as a 15-yard targeting penalty that got freshman Stanley Green ejected and a fumble by Darius Mosely on a punt return — allowed the Wildcats to pull away.

All four of Illinois’ turnovers led to Northwestern scores.

Lunt had perhaps his best performance of the season, finishing with 377 yards and two touchdowns. He ends his Illini career at seventh all-time in passing yards and eighth in touchdown passes.

“It was a good way to go on top,” Lunt said. “The offense had been struggling, so to just be able to get the ball moving, throwing the ball down the field — we’ve got a lot of young receivers, so for them to gain confidence for next year.”

Turner was Lunt’s favorite target Saturday and tied or broke single-game career highs across the board, finishing with 11 receptions for 164 yards and two scores. He ends the year with a career highs in receptions, receiving yards and touchdowns.

Northwestern did most of its damage on the ground, piling up 278 rushing yards on the day. Justin Jackson and John Moten IV combined for five rushing touchdowns, which is the most Illinois has allowed in a single game since 2014.

Smith finishes his first campaign at the helm in Champaign with a 3-9 record, which is the team’s worst mark since 2009.