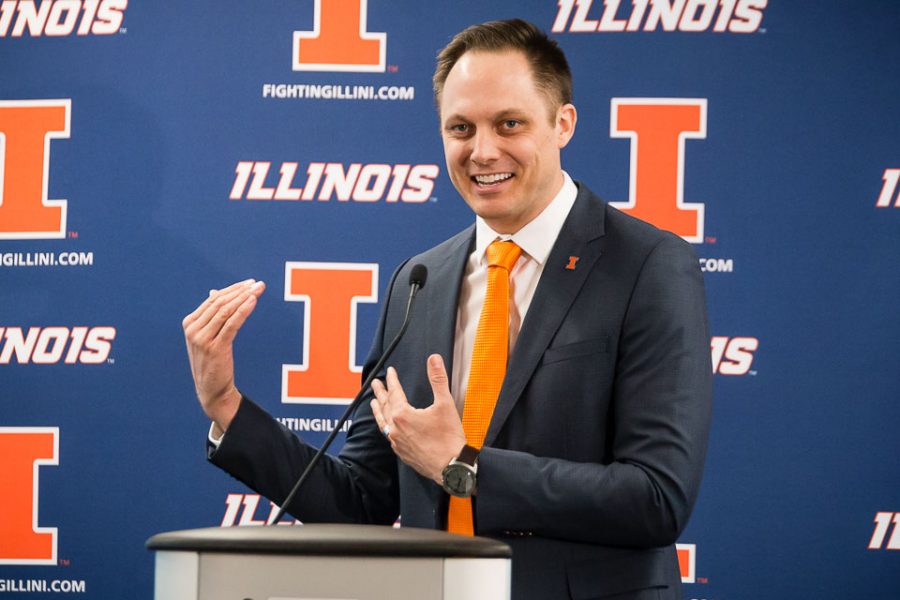 “I owe a lot of thanks to a lot of people,” Tamas said. “All of the coaches that I had and the co-workers throughout the years taught me everything that I know now. I need to thank my wife Jen (Tamas). I wouldn’t be here without her support and ultimately her passion for the sport as well. Being a coach’s wife is not easy. It took me a lot of hours to get here.”

Tamas will be the eighth head coach in Illinois history after former head coach Kevin Hambly left the program to take over at Stanford last month. This will be his first head coaching opportunity after eight seasons as an assistant coach at UC-Riverside, Cal Poly, Minnesota and Nebraska.

During his two seasons at Minnesota, he helped lead the Golden Gophers to a Sweet Sixteen appearance in 2011 and a trip to the Elite Eight the following year.

In the first of his two seasons in Lincoln, Nebraska, Tamas turned the Cornhuskers into one of the best defensive teams in the Big Ten. During their 2015 title run, the Cornhuskers ranked second in the conference in blocks per sets and held opponents to a .167 hit percentage.

Tamas will now have the opportunity to implement middle blocker Ali Bastianelli into his defensive schemes. Last season, Bastianelli was the only player in the country to eclipse 200 total blocks. She also led the nation in blocks per set at 1.79. With Bastianelli leading the way, the Illini racked up 615 blocks, which was ranked first in the Big Ten, and 17th in the nation.

“Really good middles can read the game really well, and Ali does a very nice job of that,” Tamas said. “Not just for stuff blocks, but getting touches to slow it down for the defense to (get a play on) balls. She was one of the top blockers because she was a really good reader of the game, and she’s able to see the game really well.”

Aside from coaching at a high level, Tamas also made a name for himself as a player.

During his time at Pacific, he was unanimously selected to the AVCA All-America first team and was named the Tigers’ MVP in 2013. Tamas’ record of 5,086 assists as a four-year starter at Pacific still stands, and he currently sits 10th all-time in program history with 498 digs.

After college, Tamas played professionally for six years overseas. He also spent four years playing on the U.S. National Team. In 2005, he helped Team USA capture a silver medal in the World Grand Champions Cup in Japan, and followed it up by taking home a gold medal in the 2006 NORCECA Championships in Mexico.

Junior Jordyn Poulter will have the opportunity to learn a lot about her position from her new head coach. Last season, she ranked sixth in the Big Ten with 1,190 assists and was named to the All-Big Ten team.

“Jordyn really excites me because I was a former setter and All-American at Pacific and with the (U.S.) National Team,” Tamas said. “She’s big. She’s physical. And (has almost) the same attributes I had when I played, and I hope to teach her a few things I’ve learned along the way that helped me beyond just the collegiate career, but into (my) international career as well.”

About a month ago, Jen gave birth to her and Chris’ second child, Josephine. But Chris does not think their newborn will play a heavy factor in his wife’s role with the team.

“Once we get here we’ll find a daycare and we’ll go through our due diligence finding a good one,” Tamas said. “We’re excited to have Jen in the gym. She’s a very good coach. We drop the kids off at daycare (before) practice, so either me or her go pick them up from daycare when we’re done. We’ve done it before, so we’ll do it again.”

Tamas will try to lead the Illini back to the postseason. The team did not make the NCAA tournament this past year after recording a 10-10 record in Big Ten play, which featured a seven-game losing streak.

Illinois has never won a national championship. The team’s best finish was in 2011 as runner-up to UCLA. Tamas knows what it feels like to be crowned champion, having experienced it two years ago with Nebraska, and he hopes to one day share that feeling with the Illini.

“I told the team last night, ‘I can’t promise you guys wins and championships,’” Tamas said. “’But I can promise, if we work hard, if we have a great attitude, if we’re really good teammates, we’ll have the best shot possible to do that.’ I hate losing. Bringing a championship would obviously be the ultimate goal and that’s what we’re shooting for.”