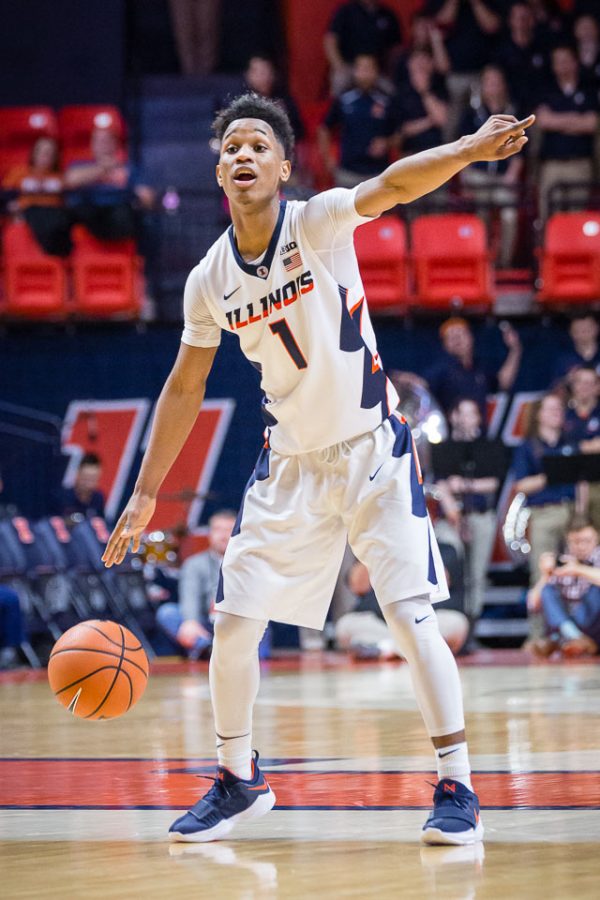 Illinois guard Trent Frazier (1) calls out a play during the game against Iowa at State Farm Center on Thursday, Jan. 11, 2018.

On Feb. 7, 2013, Tyler Griffey scored a layup at the buzzer to help the Illinois men’s basketball team take down No. 1 Indiana. Griffey was mobbed by his teammates, while fans at Assembly Hall flooded the court. That was the last time the Illini took down a top-10 opponent.

Illinois will have another upset opportunity Monday night against No. 6 Michigan State. It is the team’s first home game since winter break, and with Orange Krush back on campus, starting point guard Trent Frazier believes the matchup with the Spartans can serve as a fresh start.

“Everyone’s back in school, so it’s going to be a really exciting game,” Frazier said. “It’s time for us to start playing our game and doing what we do. We gotta change the culture.”

The Illini are coming off their worst loss of the season – a 25-point beat down against Wisconsin. Frazier led the backcourt with 11 points and five assists, but also had four turnovers and shot just 35.7 percent from the field. Leron Black continued his consistent play this season, totaling 16 points on 7-of-9 shooting but turned it over four times as well.

Despite leading the team in turnovers against the Badgers, Underwood commended Frazier and Black for their steady performances throughout Big Ten play. They are clearly the Illini’s two main catalysts on offense – usually keeping Illinois within striking distance – but it still hasn’t translated into a conference victory. The path to that first win doesn’t get any easier against Tom Izzo and the Spartans.

“They’re big and very, very physical,” Underwood said. “They’re a team that can make a deep (NCAA tournament) run because of that.”

The Spartans are led by sophomores Miles Bridges and Nick Ward. Bridges is averaging 16.9 points, 7.2 rebounds and 3.1 assists. Ward has started in every game this season is posting 14.5 points and 7.8 rebounds per contest.

In Michigan State’s last outing, it took down Indiana 85-57 at home. The 28-point victory was the Spartans 13th 20-point victory of the season and snapped the team’s three-game losing streak.

Izzo’s squad is arguably Illinois’ toughest opponent of the season so far. Underwood said they are one of the best shot blocking and rebounding teams in the country. But beyond finding open shots and pounding the glass, he believes one crucial factor to his team’s success will be its tenacity.

“We’ve gotta be aggressive. We have to establish who we are.” Underwood said. “This isn’t as much about trying to defend them or do this and that. We’ve gotta fight.”

Frazier said that his team came out too causal against the Badgers and expects the Illini to be locked in from the opening tip against the Spartans. After having a players only meeting, Frazier added that the team has already put the lopsided loss to Wisconsin in its rearview.

The all-time series between Illinois and Michigan State is tied at 59 apiece. And although the Illini are winless in conference play, Monday night is another opportunity to break their Big Ten losing streak and one-up the Spartans in the process.

“We got this big (loss) on us right now,” Frazier said. “But we’re not even going to worry about those past seven games. It starts now and we’re going to change the season around.”