Time to not stick to sports 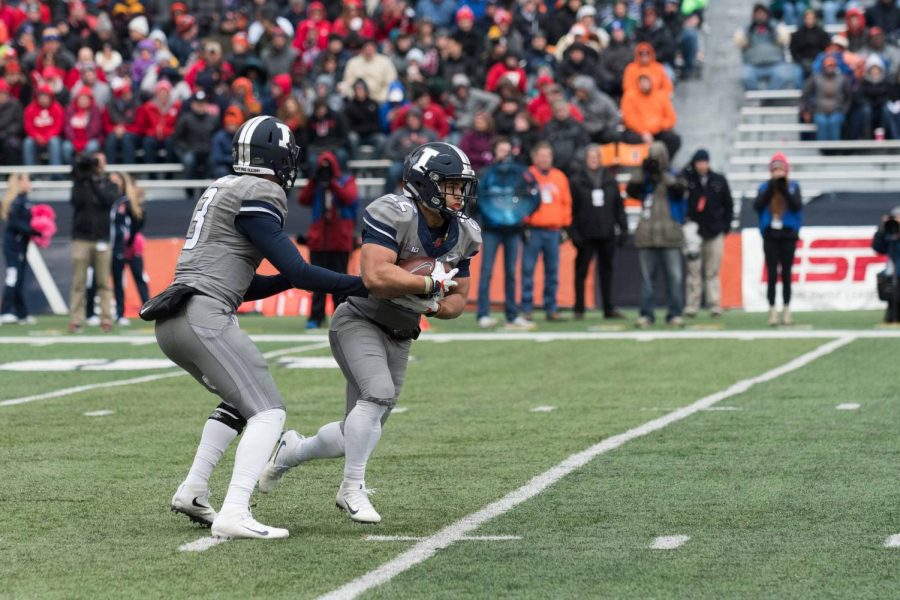 Illinois running back Kendrick Foster takes a handoff during the game against Wisconsin on Saturday, Oct 28. The Illini lost 10-24.

A few days ago, Fox News anchor Laura Ingraham spent a good chunk of her show telling LeBron James, the most well-known athlete in the world, to “stick to dribbling.”

In other words, she told him to stick to sports.

Over the All-Star Break of the NBA season, James and Kevin Durant went on ESPN reporter Cari Champion’s show “Rolling with the Champion,” and ripped on President Donald Trump.

That was why Ingraham was upset with James, because two of the biggest public figures in the world had a political take.

Ever since she told him to “stick to dribbling,” she has been largely shredded across social media. Still, there is a whole slew of people who agree with her take that since James went straight from high school to the NBA, he is not educated enough to give his opinion on the current political landscape.

And the people that agree with her about James will ultimately think the same thing about the majority of athletes. James is at the peak where every athlete in the world wants to be. Everybody knows who he is, and he has three NBA championships, five MVP awards and a ton of money.

If LeBron James is going to get attacked for speaking out and giving his opinion, then what chance do other less powerful athletes have?

You see it all the time. The “stick to sports” army is strong, but all they are looking to do is silence an incredibly powerful group in our society. Ingraham threw shade at James because he is paid a ton of money every year to play basketball, but there is a reason he makes that much money. Actually, there are two. The first is because he is the best in the world at it, and the second is because our society loves sports and pours so much money into them on a regular basis. He gets paid according to the revenue that he brings in.

Even at the collegiate level, athletes are criticized all the time for speaking their minds. Meanwhile, all their fellow students are out on their campuses with every opportunity in the world to speak their minds, to support any cause and to fight for any issue they believe in.

But athletes can’t, because they are jocks. It is a ridiculous stigma that athletes must carry with them, and if James can’t even escape it, then I don’t know if any other athlete has a chance right now.

It is time for people to realize just how much weight sports hold in our society, and that these athletes are seen as role models in their respective communities. Nobody tells LeBron James to “stick to sports” when he is donating millions of dollars to his city. Nobody wants to confine the Illinois football team to the field while they are visiting a young fan who is in the hospital.

This leniency is great, but when these athletes jump into the political arena, they are ridiculed. An athlete is as much a citizen of this country as everybody else, and therefore has the right to speak like everybody else.

Here at the University of Illinois, while this stigma is still a problem, football players at least have the backing of head coach Lovie Smith to support them. Back when the NFL protests were taking up almost every headline, Smith made sure his players knew they could voice their opinions. Team leaders like Tre Watson and Kendrick Foster had plenty to say on the issue, and Smith chimed in with his own opinions.

That is the environment we should be fostering, not one of silence. No matter your political leanings, as long as they aren’t drowned in hatred, you should feel comfortable talking about them.

Athletes have a voice. It is time to let them use it.