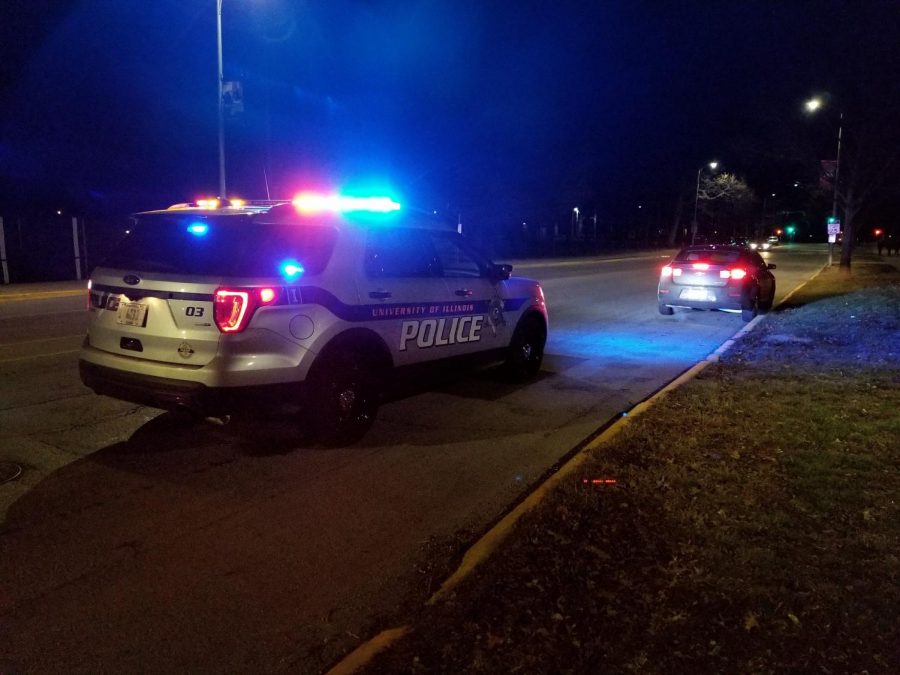 A police car pulls over a car on Pennsylvania Avenue on Feb. 3.

As Unofficial St. Patrick’s Day approaches, campus police will be ready to act on the unofficial holiday that has deep roots at the University.

“Our main goal is to have no issues arise from this event,” said Jason Norton, Urbana Police Department lieutenant, in an email. “Overall, in the past several years our student population has acted in a more responsible matter and we would like that trend to continue.”

Norton said the obvious ways to stay safe are to not participate in the celebrations, and said those who do should make good decisions.

Many cases encountered on Unofficial include individuals needing medical attention from not being responsible during the event, Norton said.

Wade said with the extra help, most students will not encounter the police as long as they are being responsible and safe on campus. He said many issues result from visitors on Unofficial.

“For the most part, students know the laws and university rules and are respectful of those,” Wade said. “It’s the outsiders who are not familiar with the rules and who come here specifically to be rowdy who seem to cause issues. That’s why University Housing puts a few rules in place to discourage visitors.”

According to a Champaign Police Department press release, crime has declined on Unofficial over the past few years. The Champaign police said past tragic events have made students more aware of safety on Unofficial.

Some of the ways to curb any illegal activity include bar checks and precautionary measures, such as the increased patrolling on campus.

CPD Sgt. Joseph Ketchum said in an email officers on duty will not be lenient on Unofficial and will be taking a zero-tolerance approach to violations, especially those directly related to the safety of people in the campus area.

“The goal of all local law enforcement, emergency services, fire departments, school staff and hospital workers is to do what we can to see that everyone is safe and gets the help they need if they get in to trouble during Unofficial,” Norton said.