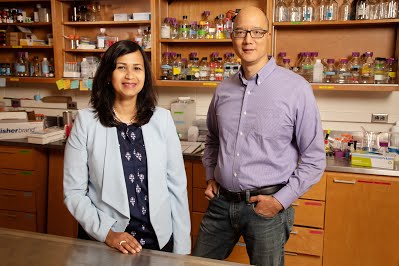 Eating foods rich in omega-3 fatty acids, such as eggs, salmon and nuts, have been known to prevent heart disease and lower blood pressure. However, a new study conducted by two University professors found eating these nutrient-dense foods may also have anti-cancer effects.

“There’s a lot of hype about omega-3 fatty acids and nobody really studies why,” Das said. “My lab focused on how the molecules reduce inflammation and stop cell damage.”

These molecules, called endocannabinoids, are similar to the cannabinoids found in marijuana — without the psychotropic effects — and are made naturally by the body. Das said her team researched the effect of this molecule in mice with tumors of osteosarcoma.

“We tried to make all these molecules combat inflammation, cancer and pain,” she said. “We found the metabolized endocannabinoids slowed the growth rate of these tumors.”

The study, now published in the “Journal of Medical Chemistry,” has been an ongoing project since 2017, when the team found a new group of omega-3 fatty-acid molecules called endocannabinoid epoxides, or EDP-EAs, targeted the same receptor cannabis does.

Das said they found an 80 percent increase in naturally occurring EDP-EAs in mice with metastasized osteosarcoma tumors in their lungs, compared to those with non-cancerous lungs.

They also discovered higher concentrations of EDP-EAs killed cancer cells, but not as fast as other chemotherapeutic drugs like chemotherapy. The results showed the endocannabinoids slowed the growth of tumors by inhibiting new blood vessels from allowing nutrients to the tumor.

Graduate student Jahnabi Roy, first author of the study, said she was observing the natural progression of osteosarcoma in mice when she and her advisor, Das, began to research the particles and how they could affect humans.

“Research has shown that omega-3s are beneficial to health in various aspects,” she said. “But, it’s not the omega-3 itself that makes it beneficial. It’s how it metabolizes in the body to get those effects.”

Roy said although consumption of omega-3s can lead to more EDP-EAs, cancerous tumors need something to work faster to stop their growth, like endocannabinoid epoxide derivatives.

“We looked at different classes of endocannabinoid and their effects on cancer,” she said. “We found they do kill cancer cells, but they do it better metabolized.”