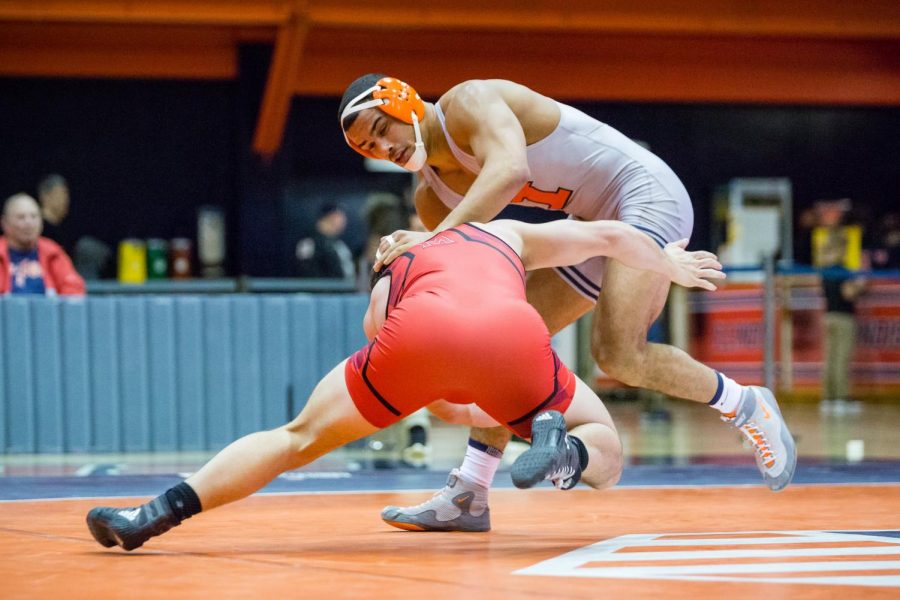 Illinois’ Emery Parker wrestles with Maryland’s Niko Capello in the 184 pound weight class during the meet at Huff Hall on Sunday, Jan. 28, 2018. The Illini won 25-18.

The No. 17-ranked Illinois wrestling team was in for a competitive match when they faced off against No. 10-ranked Missouri outdoors at Grange Grove in its season opener. Missouri shot out to an early lead and was dominant from there on out, winning the dual meet 30-8.

The day started off rough when 125-pound freshman Josh Contreras lost his match to Missouri’s Colby Smith 15-0. The win gave Missouri an early 5-0 lead. In the next match, 133-pound Illini freshman Abdullah Assaf faced off against the Tigers’ No. 9-ranked Josh Erneste. Once again, the Illini weren’t able to put up a point and dropped this match to Assaf 13-0, increasing the Missouri lead to 9-0.

The Illini regained competitiveness in the third match when 141-pound sophomore Mike Carr took on Missouri’s No. 3-ranked Jaydin Eierman. Carr scored two takedowns early, which put him up 4-1. After Eierman tied it up at four, Carr scored five consecutive points to raise his lead to 9-4. Eierman was able to tie the match at 10 and force overtime where he won the match following a takedown. Despite the loss, Carr feels he learned a lot from the match-up.

“Just figuring guys out, that’s a top-ranked guy in the country,” Carr said. “Now, I have a better understanding on how to beat him and lock down that match. I learned a lot about myself in that match and what I need to do in order to win other matches and beat top-ranked opponents.”

In the next match, No. 17-ranked Joey Gunther made his Illini debut and defeated No. 14-ranked Connor Flynn in the 165 weight division 4-1. Gunther scored three overall points for the Illini, making the score 18-5.

Illinois’ No. 2-ranked senior Emery Parker was down early against Missouri’s Dylan Wisman 2-0, but Parker scored a take down and an escape to come back and lead 3-2. Parker followed up with two more points to win the match 5-3.

“I think I started off a little slow,” Parker said.”I think I felt comfortable, but I think It was just a matter of getting my offense going. I don’t really think I got it going half as much as I could have … it’s all forward from here.”

Parker’s win was the last one of the day for Illinois.

197-pound Illinois senior Andre Lee lost to Wyatt Koelling in overtime 2-1, increasing the Missouri lead to 27-8. Heavyweight senior Deuce Rachal also dropped his match up to Missouri’s Zach Elam, 10-4, which ended the meet with the a 30-8 Missouri victory.

“Everybody did a great job,” head coach Jim Heffernan said. “We just didn’t do our part. I just don’t think we were very enthusiastic … that is 100 percent on me.”

Even though Heffernan took a lot of responsibility, he still calls on the team to compete. After the first match, Heffernan is not as concerned with his team’s skill as he is with its motivation and pride.

The Illini will compete at the Maryville Open in St. Louis on Nov. 10 and plan to send Rachal, Lee, and Christian Kanzler.