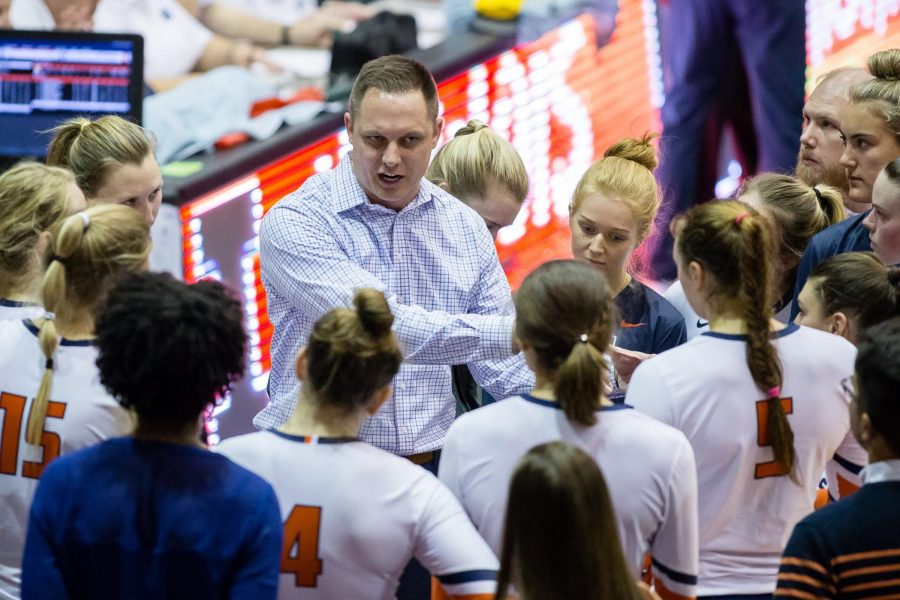 Illinois head coach Chris Tamas talks to his team during the match against Michigan at Huff Hall on Oct. 19. The Illini won 3-2. The team continues to pick up wins on the road and now heads home to compete as the No. 4-ranked team in the country.

It’s been almost two weeks since the Illini played their last match at Huff Hall.

While away, Illinois beat the reigning national champions and extended its overall winning streak to seven games with victories over Nebraska, Ohio State and Maryland.

The team’s conference record stands at 11-3, and the Illini are ranked fourth in the nation with only one Big Ten team ahead of them, No.3 Minnesota’s Golden Gophers.

With that in mind, this weekend’s return home carries nothing but excitement for Illinois. The team’s schedule includes Rutgers and No. 7 Penn State, and this weekend’s matches will be Illinois’ first encounter with both teams this season. In 2017, Illinois played Penn State twice, losing both matches while taking down Rutgers in their only meeting.

Amid all the excitement, head coach Chris Tamas knows his team is still focused as the postseason inches closer.

“One of our mantras is ‘three sets by two points,’” Tamas said. “We get to start every set new, it’s not like we go down by 20 and have to climb back by 20 or vice versa. It’s about taking care of business, and that mantra has been put out to the team, and they’ve taken heart to it. They’ve done well with it.”

When playing in the Big Ten, however, no win is ever guaranteed; on any given night, even the best teams can be beaten.

For Illinois to avoid such a fate, according to Tamas, the most crucial ingredient will be how they handle the volleyball this weekend.

“We put a lot of emphasis on our ball control, a lot of emphasis on our defense, especially after those three losses,” Tamas said. “It was an area we thought we could have picked up well, and then your attackers have to finish the job. And we’ve been working on all aspects, but a lot of it comes down to making sure they make the correct choices. Everyone has the ability to kill a ball or level, it’s more of how you make that choice.”

As the Illini round out the final stretch of the regular season, their results on the court will have a major impact on where they end up during the postseason.

For Tamas and his team, that means taking each win or loss as it comes.