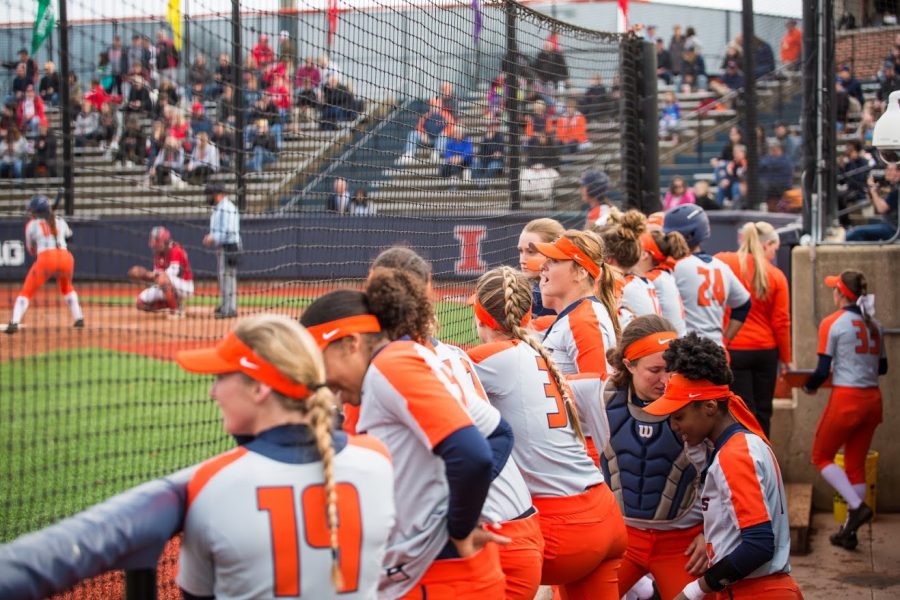 The Illini cheer on their batter in the dugout at Eichelberger Field April 3. Illinois will be looking to secure a final series win against Purdue next weekend.

Illini in the field

With a little under two weeks left until the Big Ten Tournament, the Illinois softball team (27-20) sits at the back half of the conference rankings. As of Thursday, a conference record of 6-11 leaves Illinois tied for seventh in the Big Ten alongside Indiana, Purdue,and Penn State.

The Illini started strong in conference play after winning their first Big Ten series against the Wisconsin Badgers on March 24. Illinois recently took on its second conference series on April 13 in Iowa. Illinois also picked up wins against Nebraska and Minnesota during that span but dropped both series.

After picking up a handful of conference wins, Illinois recently entered the toughest part of its schedule, facing No. 22 Michigan, No. 21 Northwestern and Ohio State, who received votes for the latest USA Today/NCFA Coaches Poll.

Just over a week ago, the Illini were swept on their home turf by the Wolverines, but faced two one-run losses that could have turned the series the other way. Illinois was swept again in a doubleheader on Tuesday at Northwestern 8-0 then 4-2.

After another tough series, the Illini headed to the home of the Buckeyes this weekend for their last road trip in hopes of breaking a five-game losing streak. Instead, the Illini started to tumble down the rankings, with losses to the Buckeyes on Friday and Saturday.

Before the Ohio State series, Illinois sat at No. 45 in the NCAA Women’s Softball RPI. With postseason approaching, the Illini will be looking to secure a final series win against the Boilermakers next weekend to make a case for the NCAA tournament.

While the Illini haven’t seen recent success in the win-loss column, their abilities are better reflected through success at the plate. The Illini have six players with hitting above .300, ranking 18th in the NCAA as a whole for batting average (.318).

Redshirt seniors Carly Thomas and Annie Fleming have also been successful during their final seasons as Illini. Thomas ranks 45th in the country with 58 hits while Fleming sits at 49th with 57 hits. Thomas also leads the NCAA with 22 doubles.

Freshman leads on the mound

On a pitching staff with three seniors and one junior, freshman Sydney Sickels has earned the top spot for the Illini in her first season with a 3.48 ERA in 144.2 innings.

The freshman has started 24 games, but she has appeared in a total of 37, ranking fourth in the Big Ten. Senior Taylor Edwards sits behind Sickels with 12 starts and 24 appearances.

Sickels earned her first collegiate win in the first game of the season back on Feb. 8 against Oklahoma State. Since then, Sickels has continued with a winning record, currently at 17-12. Her 17 wins ranks fifth in the conference and 36th in the country.

With four saves on the season, Sickels ranks second in the Big Ten and 16th in the NCAA. The freshman’s four saves also ties three former Illini for the program’s most saves in a season.