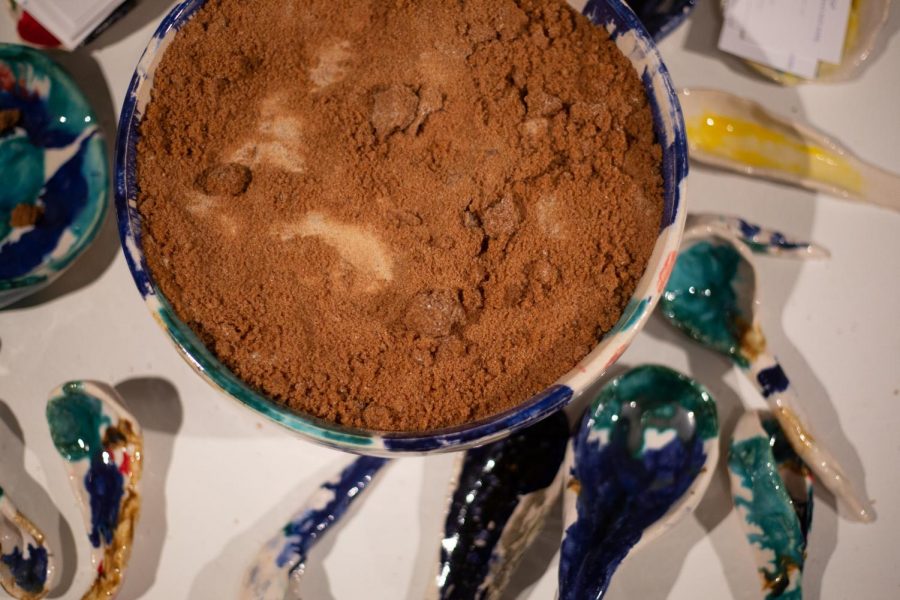 Alicia De León's "A spoonful of brown sugar" is the centerpiece of the “Objects Who Hold, Objects Who Let Go.” installation in the copy room at the Department of Latino/a Studies building.

The copy room at the Department of Latino/a Studies building has TVs on the left and right walls. The one to the right shows an unapologetic Paulina Camacho Valencia eating cow tongue like it’s her last meal. Valencia, graduate student in FAA, titled her piece “Lengua Madre” because she says art is made through the gut.

This is the latest exhibit by La Estación Gallery, a community of artists who turned a copy room into an interactive, multimedia gallery: “Objects Who Hold, Objects Who Let Go.” This exhibit challenges viewers to consider emotional links to physical objects.

Katie Netti, graduate student in FAA, said the beef tongue in Valencia’s piece is a delicacy of cultural significance. She said the video was a “way to literally ingest conflict.”

“Objects Who Hold, Objects Who Let Go,” marks the second art display to be in the gallery, which used to just be a copy room. Sandra Ruiz, Assistant Professor of Latino/a studies, turned this room into her own estación (station) to increase the representation of minority artists back in the fall of 2018.

When Ruiz had originally asked contractors to sand the walls of the room, they asked her for $25,000, which was way out of her price range. Ruiz then came into contact with Netti who offered to do it for significantly less.

Netti’s piece in the gallery takes up a wall by itself, the only stand-alone sculpture in the exhibit. She drew from the intense class sessions that allowed her to open up to her own traumas to her peers. Netti’s piece is called “Inhaling Overtime,” and it is a skeleton figure surrounded by plastic that has a bellow attached so that the visitor can then pump air into the chest.

“I wanted the pink inside to read as human,” said Netti. “In navigating this institution, you cannot do it on your own. You need your friends and family, you need outside support…my piece was a thank you.”

Upon arriving at the space, the TV to the left showed a tutorial-type video on how to wrap your hands before a boxing match and provides tape to practice with. It was created by s.g maldonado-vélez, a graduate student in LAS. They first wrote a poem called “The Champ,” three years ago, and knew they wanted to return to these concepts for La Estación Gallery’s new exhibit.

“I feel as growing up you had two choices, either you played baseball or you were a boxer,” said maldonado-vélez, “as a queer person of color, genderqueer person, I was trying to find a way to explore the very masculine places and masculine spaces of a boxing ring…How do you ‘queer-ify’ it?”

maldonado-vélez explained that the act of wrapping the opponents/viewers’ hands is a way to take care of the person, to show intimacy without having to fight first. They were intentional in making sure the video only showed the preparation before the fight and not the fight itself.

“The idea of the piece is you never see the actual fighting because I don’t want to glorify violence against queer people, against trans people,” maldonado-vélez said.

Right beside “The Champ” is a fireplace with pictures of hands grasping dirt which presents Melody Contreras’ piece, “Waterless Boundaries.”  Contreras, junior in LAS and FAA, took inspiration from seeds that are not nurtured.

“What if there is nothing to help the seeds grow?” Contreras said, “Maybe you don’t want to belong. What if you’re tired of trying?” Contreras challenges belonging and the need to be watered or seen by the sun as she purposefully planted her seeds in the dark, away from that.

She reflected on the traumas she experienced by institutions and sees her work as a way to let it go, labeling that as her ‘object.’

“I was holding onto the feelings of wanting to belong to a place that never wanted me to belong here or see the value of me…I feel like I’ve let it go,” Contreras said. (Ironically, in the process of putting her project together, her seeds did sprout despite the odds against it.)

Many other pieces explored breathing in the exhibit such as “Griefwork,” by Laura M. Coby, a doctoral student in FAA. Her piece has recordings of the last breaths of her mother pulsing within pink crystals. “Breathe with Me” by Daniel Reyes, a contributing artist, attempts to surround the viewer with his inhales and exhales, to share the burden of being a queer person of color.

“Breathing is such an intimate, universal need for us, as just human beings,” Alicia De León graduate student in Art + Design, said. “For some people, that is someone on their deathbed, their final breath. For other people, it was exhaustion and I want you to hear it.”

De León’s piece, “A spoonful of brown sugar,” is in the center of the room, a body of work that comments on colonialism, sexism, feminism, love and war. León made spoons of different sizes and a ceramic bowl in the middle filled with brown sugar. Beside it are cards with different questions probing the viewer’s understanding of any ignorances they may hold. For example, one asks, “have you ever referred to something/someone as exotic?” Every question has a statement before suggesting the viewer should take a spoonful of sugar to swallow the guilt.

“I wanted to offer sugar as a gentle gesture to create a path to redemption, so you don’t get stuck in an ugly cycle where the weight of the guilt weighs you down,” De León said.

De León opted for brown sugar “because real sugar isn’t white, it’s processed and stripped of its flavor.” She sees parallels with how people aspire to conform to the mainstream, blonde-haired and blue-eyed, saying these aspirations strip viewers of their color and their own “flavor.”

While working on their pieces, many artists revisited how they came to view and ultimately use these objects in general.

“We’re in some way reclaiming the idea of the ‘object,'” maldonado-veléz said. “It doesn’t necessarily mean a thing you can touch and destroy and manipulate, but it’s something that gets presented to you, and I think that is what we are doing.”