Illini road to success comes to a close 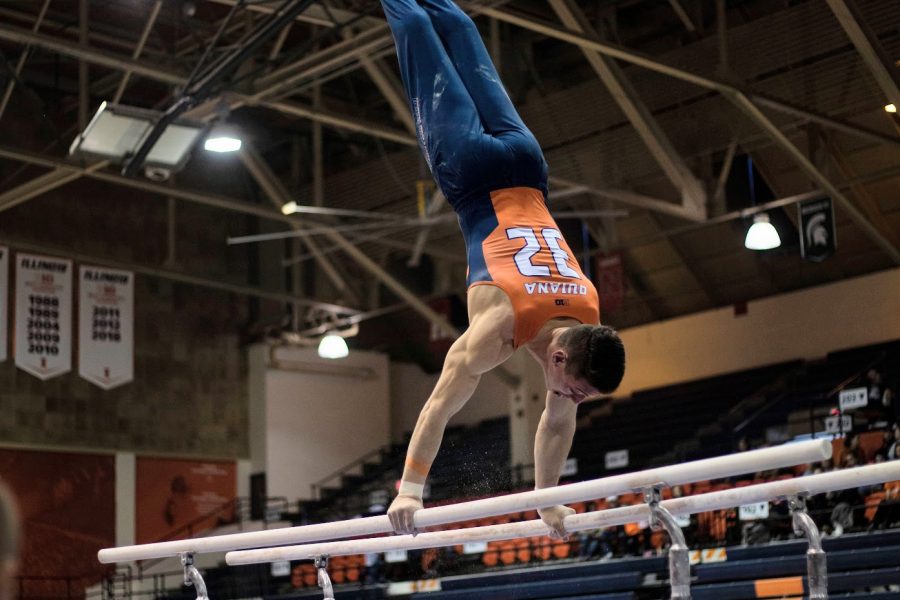 Senior Sebastian Quiana performs on the parallel bars during the Illinois’ meet against Penn State at Huff Hall on March 7.

The Illinois men’s gymnastics team left Champaign last Wednesday for San Juan, Puerto Rico for what was supposed to be a special trip, but an otherwise routine competition.

The competition never happened. It was canceled, along with every remaining competition the team had scheduled, due to the ongoing COVID-19 pandemic.

In an unprecedented decision, the NCAA announced on Thursday the cancellation of all remaining winter and spring championships, men’s gymnastics included, to prevent transmission of the virus. It did not force any conference or school to suspend their seasons, but minutes after the NCAA’s announcement was released, the Big Ten Conference announced the cancellation of all remaining conference and non-conference competitions its members had scheduled.

The team returned to Champaign on Saturday, the day they were supposed to compete.

A full-season recap of the team wasn’t expected until April, but with the season over, it’s time to look back at what the Illini did over the last few months.

The Illini finished their season with a record of 8-3-1 and a perfect 5-0-0 record in Huff Hall. The team secured blowout victories over UIC and Springfield College and earned hard-fought victories against ranked Big Ten foes Nebraska, Michigan and Penn State.

On Jan. 11, the Big Ten awarded both of its weekly accolades, the first of the season, to Illinois gymnasts. Sophomore Hamish Carter was named Big Ten Gymnast of the Week after winning three event titles and two second-place event finishes against UIC. McCool was named Big Ten Freshman of the Week after winning the floor exercise title in his collegiate debut against UIC.

“That was so unexpected. It really wasn’t even in the back of my head,” McCool said in January. “It’s cool to get it with Hamish. I’ve been following his career and looking up to him. I was really excited to learn we’d be teammates, and he’s been such an asset to me and my gymnastics. He’s been a huge help.”

On March 10, Paradise was named Specialist of the Week by the CGA after winning his twelfth career pommel horse title against Michigan and Penn State.

Head coach Justin Spring was frustrated by a lack of consistency this season from his gymnasts. Early in the season, the Illini struggled on parallel bars and high bar, two events they usually performed on at the end of their competitions. By the end of the season, the team was performing better on these events — they had only one fall on each event during their final competition. At the same time, however, the team’s struggles moved to pommel horse and still rings, two events that Spring said could’ve been the best in the country.

These struggles caught up to the Illini twice this season. Spring said the team “grossly underperformed” at the Windy City Invitational, an annual competition the Illini won five consecutive times prior to this season. The Illini placed third in the invite, ahead of Northern Illinois, UIC, and Iowa, but below Michigan and Minnesota.

“We had like 15 falls. That is not what we spent six months of preseason preparing to do,” Spring said after the invite. “I was really upset with how we showed up at Windy City. That could’ve been our win, should’ve been, easily.”

A week later against Minnesota, the Illini led the Golden Gophers through the first five rotations of the meet but underperformed on parallel bars, their last rotation, and lost the lead and the meet.

Injuries also played a role in the team’s struggles this season. Sophomore Michael Fletcher was out for the entire year after tearing his ACL last season. Sophomore Clay Mason Stephens was also unavailable for the entire year. Junior Jordan Kovach was limited in his participation due to injuries he sustained this season. One of Kovach’s best events is parallel bars, and according to Spring, Kovach’s absence “showed up tremendously against Minnesota.” The team’s performance against Iowa was also hampered when Carter suffered an ankle injury early in the meet. The injury turned out to be minor, but Carter was pulled from his remaining events against Iowa and sidelined for the Michigan-Penn State tri-meet to avoid further injury. Removing and replacing Carter in the Iowa meet was, according to Spring, a two or three-point loss for the Illini.

That point loss in the Iowa meet would come back to haunt Illinois. The final score of that meet was 403.05-403.05. It was the sixth tie in the last 2,100 head-to-head competitions the Illini have competed in over the last 90 years.

It initially appeared that the Illini had defeated Iowa by three-tenths of a point, but Iowa head coach JD Reive believed the judges used the wrong start values on three of his gymnasts’ routines. He was correct; each of those routines were scored one-tenth of a point less than they should have been, and when the score was updated, the final result was a tie.

“It’s rare. It’s bizarre,” Spring said after the Iowa meet. “It gives support to what I’ve said over the last 10 years. Every tenth (of a point) matters.”

In February, Kovach and graduate Alex Diab competed as individuals in the USA Gymnastics Winter Cup Challenge. The Winter Cup Challenge was the one of several competitions scheduled this year to determine the men’s gymnastics team that will represent the United States at the 2020 Summer Olympics in Tokyo this July, assuming the Olympics aren’t cancelled by the COVID-19 pandemic. Kovach was supposed to compete in the all-around competition, but on day one, he suffered an injury during his vault landing that left him unable to complete his all-around competition. Diab, on the other hand, placed in the top 20 in every event he competed in, and he outright won the still rings championship. Diab qualified for the U.S. Men’s Gymnastics Championship, scheduled for June in Fort Worth, Texas, which is the next step to competing in Tokyo for Team USA.

Sophomore Clay Mason Stephens was also pursuing Olympic aspirations but for his native Australia. However, Australia’s Olympic qualification competition, the Oceania Continental Championships, are scheduled to take place the same weekend the NCAA championships would’ve happened. Stephens chose to redshirt the entire 2020 season in order to retain a year of eligibility and focus on competing in Australia. Stephens qualified for the Oceania Continental Championships, but while competing in the Gymnastics World Cup in Melbourne, Australia in February for international experience, Stephens tore his left ACL, ending his hopes of competing in Tokyo for Australia.

There are five seniors on the team: Satchel Hudson, Jacob Light, Michael Paradise, Sebastian Quiana and Zach Treadway. Although Danny Graham is listed as a senior on the team’s official roster, he will return to the team next year for his last collegiate season. The NCAA has announced that spring athletes will receive an extra year of eligibility to compensate for the lost 2020 spring season, but no such decision has been made yet to grant winter athletes an extra year of eligibility.

If the NCAA does not grant Hudson, Light, Paradise, Quiana and Treadway an additional year of eligibility, the five Illini seniors ended their collegiate careers by defeating No. 2 Michigan and No. 8 Penn State at Huff Hall for Senior Day. Paradise won the pommel horse title while Hudson and Quiana stepped up in big ways. Hudson was forced to perform his still rings routine a second time after an equipment malfunction nullified his first performance. Despite the exhaustion of performing his routine already, Hudson was able to match his expected score. Quiana, meanwhile, ended his career, and Illinois’ season, with an impressive high bar performance and a stuck landing on high bar that secured the victory for the Illini.

Had the remainder of the 2020 gymnastics season not been canceled, the Illini would have competed in the Puerto Rico Invitational on Saturday before returning to Champaign on Monday. Their final dual meet of the season would’ve been at Huff Hall against Ohio State on Saturday. The Illini would’ve started their postseason by competing at the Big Ten Men’s Gymnastics Championships in Minneapolis on April 3-4. The season would’ve ended two weeks later in Ann Arbor, Michigan at the NCAA Men’s Gymnastics National Championships.

Looking ahead to next season, the Illini will welcome six freshmen to the team: Ethan Boder, Will Hauke, Sebastian Ingersoll, Logan Myers and two walk-on recruits. All six recruits rank among the top 25 NCAA men’s gymnastics 2021 recruits and Illinois landed more top 25 recruits than any other team in the nation. Illinois’ recruiting class of 2021 ranks No 3. in the nation behind Penn State and Stanford.