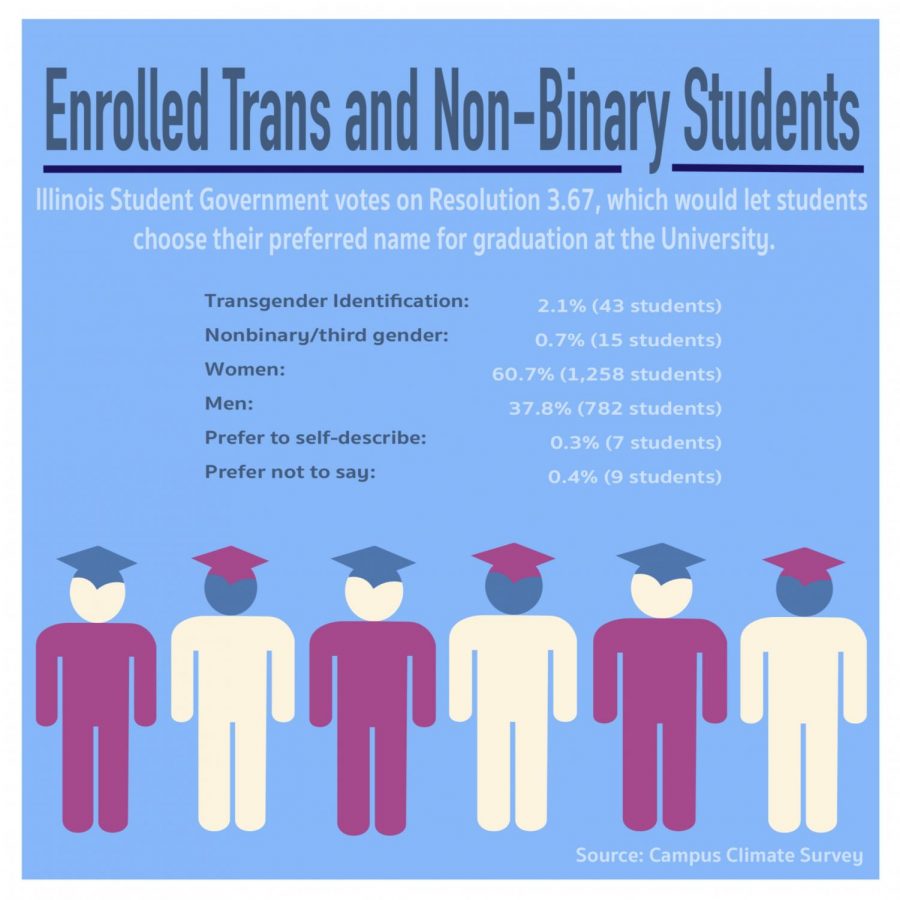 On March 9 the Illinois Student Government passed a resolution that calls for the University to allow students to use their preferred names on their diplomas.

Aveline Bundang, senior in Engineering and contributing writer of the resolution, said the resolution was created because LGBTQ issues are often ignored by both ISG and University administration.

“ISG has not passed or even mentioned the word LGBTQ in two years, and there were a lot of very present issues that the administration still had to deal with that they were neglecting,” Bundang said.

Bundang said she acknowledges the University’s attempts to help the student LGBTQ community, like the addition of gender-neutral bathrooms. However, she said she would like to see more improvement.

“This has been an internal problem basically from every trans person I’ve known who has graduated or is about to graduate,” Bundang said.

The resolution could help eliminate the financial stress of legal name changes.

“There’s a lot of people who transitioned in college and don’t have the time and resources to perform a legal name change,” said James Arnold, senior in Engineering and contributing author of the resolution. “It’s a hugely laborious process that differs from state to state. If you’re from Illinois, good luck trying to change your name (in) a different state.”

The most recent Campus Climate Survey polled over 2,000 students for a variety of questions and demographic information. According to the survey, 15.8% of the student population has a non-straight sexual orientation, and around 2% identify as transgender. However, because these are self-reported numbers, Bundang said the LGBTQ presence at the University is probably smaller.

Cody Dominick, sophomore in Engineering and trans student, said the University is doing a good job being inclusive with the transgender student community. Dominick said he’s glad there are people pushing for a change with the preferred name diploma.

“If your name in your diploma does not match the name that you apply for a job with, then you’re not always guaranteed to get that job because you may be investigated for any number of federal crimes,” Dominick said.

In addition to helping the LGBTQ student community, the resolution would also help international students use their preferred name of choice in their diploma.

“For international students, diplomas are considered a legal document, and because of that they must have your legal name in your diploma,” Bundang said.

Dominick said this resolution was barely made as a result of obstacles trans students face. However, she is glad the campus community is more open to supporting trans students.

“Trans students are a very small minority group on campus,” Dominick said. “Unfortunately, that often causes our voices to be left unheard or for us to feel like we don’t have a platform to speak because sometimes it feels unsafe to speak as a trans person publicly.”

Arnold and Bundang both hope students will realize the barriers LGBTQ students face on campus and will get involved by attending ISG meetings and voting for pro-LGBTQ candidates in upcoming elections.

“The queer community on campus, well it is fairly invisible to most people outside of the community, we exist, we are strong and we are here,” Bundang said. “We are all in your departments and classes and we are basically people.”