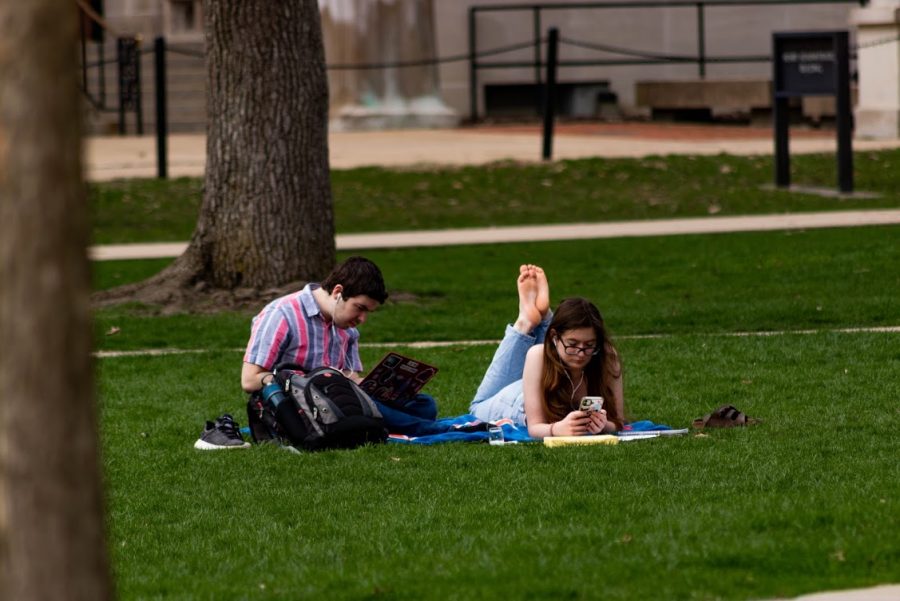 Two University of Illinois students relax on the quad April 4, 2020.

On March 16, the University suggested students remain at their permanent homes after spring break due to COVID-19. However, because of employment circumstances and personal choices, some students have decided to stay on campus during the worldwide pandemic.

The absence of students walking to class and empty buses create a difference for students who are currently living on campus.

Lorena Escamilla, sophomore in Engineering, is currently living in Daniels Hall. She is choosing to remain on campus and is very surprised by the school’s environment.

“I could tell that [campus] is really dead. Not a lot of people are outside. It is a weird dynamic thing to experience being back on campus. I never imagined being like this before,” Escamilla said.

“I felt like it would alleviate a lot of financial responsibility from my parents. When I’m on campus, a lot of stuff is covered for me since I live in a dorm,” Susie Lopez, sophomore in ACES said. “I just thought it would be easier for my family, especially during hard times like now it would be best to stay on campus. Once the semester is over, I will go back in May.”

Chelsea Hamilton, senior assistant director of communications and marketing for University Housing, says housing is in the process of moving all student residents into PAR.

According to Hamilton, about 5,000 students moved out of their dorms after Gov. J.B. Pritzker implemented the stay-at-home order for the state of Illinois. However, there are still 500 students currently living in the residence halls, a combination of both domestic and international students.

“We also have a portion of students who said ‘I need to stay on campus because I have an on-campus or off-campus job that I rely on in order to attend the University of Illinois’ or they do not have access to amenities such as the internet at home,” Hamilton said. “So, it was important for University Housing to remain open to help support students that rely on those needs.”

Emmanuel Castellanos, senior in Engineering and student dining hall worker at the University, said he came back to campus due to employment circumstances. Castellanos did not know if he was going to get paid for the remainder of the semester by University Housing until he received an email from them.

“This is something that would’ve influenced my decision to come back to Champaign,” said Castellanos. ”Knowing now that I’m getting paid a set amount of hours for the rest of the semester, I could’ve stayed back home, saved money and not worried about spending on groceries.”

Other concerns have arisen about mental health awareness from the University, said Jamie Gordon, sophomore in Media. Gordon decided to come back to campus and is currently living in an apartment. Gordon said the University should provide services for students who are dealing with the pandemic.

Gordon said she would support “setting up some sort of counseling system specifically for students who are having trouble with mental health as a result of the pandemic or as a result of other entities that are arising from everything that is going on.”

Josue Saldivar, sophomore in DGS, also believes the University should focus on mental health for students who are living on campus.

“I do think the [University] needs to bring a greater focus to people who have mental issues because from what I’ve heard so far, the University doesn’t bring attention to mental health,” said Saldivar. “That is something that they should look into the most during these difficult times.”

However, as of March 16, the University’s Counseling Center has been providing a phone triage counseling system for students in need with online services on the horizon.

Students may agree that these are hectic times, however, Lopez appreciates the University’s efforts to accommodate its students.

“A lot of schools just shut their doors on a lot of international students. That kinda leaves them stranded and unsure with what they’re going to do anymore,” said Lopez. “In that aspect, the University has done good.”

Gordon said she hopes students and the community will make an effort in joining together during these troubling times, especially as college students.

“The feeling that they are experiencing, they are not alone and there are a lot of people who are feeling the same sad feeling. Right now as a country and as students, we have to stick together and do our best to overcome this whole thing,” Gordon said.