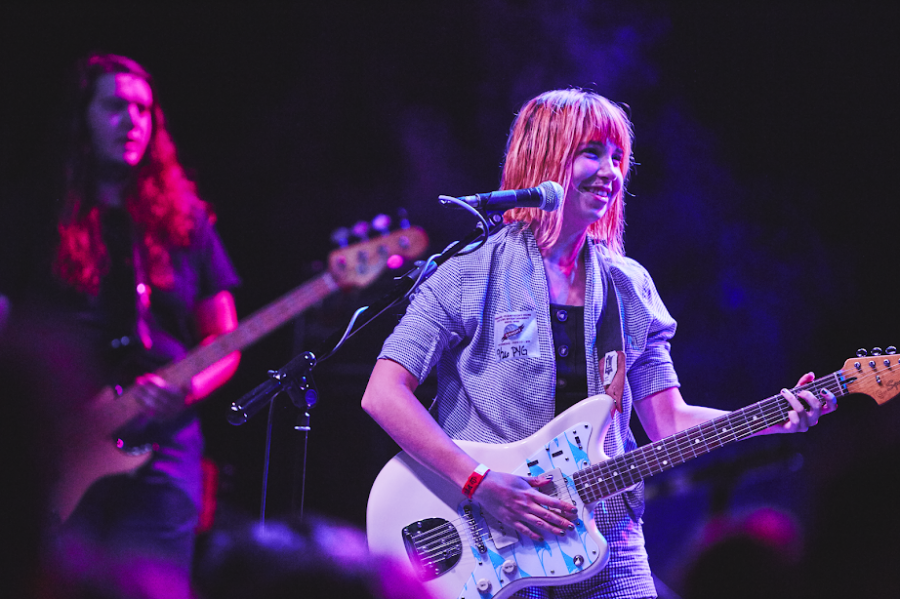 Lead singer of Beach Bunny, Lili Trafilio, smiles out at the audience while performing at the Canopy Club on Sept. 27, 2019.

The Canopy Club opened its doors to the public in 1998 and has been home to some of the most entertaining nightlife and live performances ever since. Hosting a wide variety of performers including up-and-coming artists to well-established rockstars to local budding musicians, The Canopy Club has had something for everyone.

Open mic nights have always been a hallmark representation of local musicians in the area, and The Canopy Club’s open nights are always remembered fondly by its many participants, hosts and attendees. But with the onset of COVID-19, the Canopy Club decided to move its open mic to Zoom.

Mike Ingram, the host of The Canopy Club’s open mic, is a local politician and spends most of his time now distributing face masks and other supplies. Ingram is also part of a local band called New Souls and performs often with Kayla Brown. He said he got the idea of a virtual open mic after a meeting with a county board on Zoom after news of COVID-19 surfaced.

Ingram said, “After the meeting with the county board, we had only the performers on the Zoom broadcast and everywhere else we had people on watching through Facebook and Instagram live. We had at least over a hundred viewers at any given point, so it was a good crowd that we’d accumulated.”

He said that while he was streaming the live performance, it was fun not to have a single focus on the person who was playing. He liked to have the whole panel of the performers so that people could see them listening, singing along and dancing, even some bartenders making drinks. It was like taking the whole live bar performance experience and moving it online.

Moe Pesci, a local musician in the C-U area, has been making music seriously since 2009. Pesci, who was once a bartender at the local bar Cowboy Monkey, started going to open mics around 2016. He said that his manager asked if he was picking up the shift that night because it was open mic night and he’d get good tips. He agreed to take the shift and toward the end of the night, when the open mic was ending, he asked if he could perform.

He said, “My manager was like alright, but you better kill it up there or I’m never letting you back up here again. And when I got back down, he wasn’t bartending anymore, he was watching me, and he said, ‘So you weren’t joking huh.’”

Pesci eventually moved from performing at the Cowboy Monkey to The Canopy Club. Pesci said in the beginning there weren’t many people coming, but it eventually got built up and a younger crowd started coming in. It reached the point where everyone would talk about open mics and they knew it was going to be at Canopy.

Anika Emily, another local musician, started going to the open mics at Canopy a little over two years ago and has been to almost every one since. She had been performing live her whole life but started her solo performance career slightly over two years ago. She recently released her first single “Finish Line” with Perimeter Road on Spotify, Apple Music and Bandcamp.

Emily said that given the circumstances, virtual open mics was an ingenious idea. With so many artists stuck at home practicing music without an audience, it is an opportunity to come together and see what everyone has been working on.

She said, “I participated in my first virtual open mic last week with Canopy, and it was so fun to catch up, but the biggest difference was that everyone else is muted during your set, so there’s no opportunity for crowd participation or appreciation.  It’s a little unnerving, but the supportive atmosphere brings it all together.”

Anka Radley, a senior in Engineering, known as The Dawn Patrol, has been playing live for about eight years and performing proper shows for about three. The biggest challenge for her as a student and performer is the time.

She said, “As a student — especially an engineering student — the reason I’m only a semi-regular at the Canopy open mic is that I literally just do not have the time to go. The difference between a student and working is that being a student — our work is simply just never done, and I would still spend a significant amount of time doing academic work which impedes my ability to indulge in music.”

However, ever since school shut down, Radley has had significantly larger amounts of time to focus on her musical work and has participated in both the recent virtual mics that were held.

Jake Fava, another local musician and one of the instrumentalists on Anika Emily’s single, thought that the virtual open mic’s also made it easier for people with stage fright. Without seeing or hearing the audience, everyone maintains their own safe space while participating in the virtual open mic.

Fava said that the virtual open mic also definitely increases accessibility because “now we can have people from everywhere performing as long as they have an internet connection and a laptop or a smartphone.”

“I think seeing how far the technology of virtual video calls can go is something I look forward to, because as of now, no matter how good of a phone you have or how good of an internet connection, there’s still always going to be a certain degree of lag, which makes is really hard to perform with other people. So, because everyone is using this technology now, it’d be nice to see how far they can take it and improve it,” Fava said.