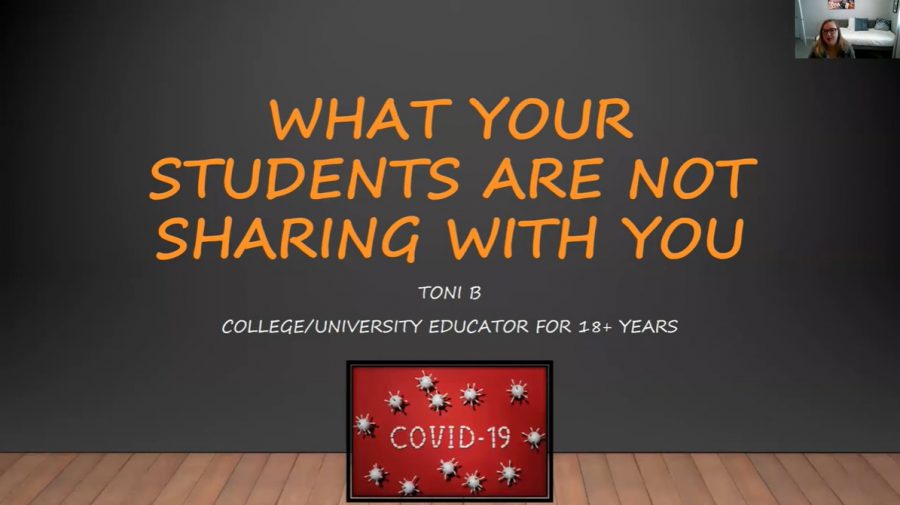 Professor Toni Burkhalter narrates in a video she posted on April 24 which details what her students and children have told her about being a student during the coronavirus pandemic.

Toni Marie Burkhalter, senior instructor in Food Science and Human Nutrition and advisor in human nutrition, recently made a video titled “COVID-19 What Your Students Are Not Telling You.” As a single mom with a daughter in undergrad doing research at the University and a son about to graduate high school, Burkhalter has heard plenty about student struggles. After receiving multiple calls and emails every day from her students, she decided to share the feedback she has been getting about studying at home.

The Daily Illini interviewed Burkhalter about her video. This interview has been edited for clarity and length.

DI: You’ve taught online before, but, as you said, a lot of teachers have not, especially classes in labs and studios. What’s your advice for translating the classroom into a remote setting?

Burkhalter: You have to rethink your entire pedagogy in a week or two. I empathize with how hard it is because I remember the first time I put a class online, and let’s just say it was kind of clunky. I didn’t even have the stresses that some of my colleagues are dealing with right now. I told one of my students, ‘You know, this is hard for me too,’ and she was like, ‘Really?’ and that was one of the first times she had heard that we as instructors are having a hard time and that this goes both ways. I think that if more instructors are open with their students we can start an open and candid dialogue about what’s going well and what isn’t.

DI: You mentioned that, based on what you’ve heard from some of your students, some instructors were being a little inflexible. Have you experienced that with some of the teachers around you?

Burkhalter: I am extremely blessed. I work in the College of ACES and the College of ACES has kind of a family. My boss was my teacher 20 years ago, so we have very candid and open conversations. None of my colleagues that I have directly worked with have been the ones that my students have been discussing. It’s instructors I don’t know that my students have told me about. Ultimately, I felt like I needed to have a voice for my students. Also, keep in mind, this is my student’s perception of the situation. The reality of it may be something slightly different. As an instructor and as someone who has kids who are students, I understand the truth may be somewhere between what my students are telling me and what might actually be happening in the classroom.

DI: How have you altered your classes to this situation?

Burkhalter: The University of Illinois has this fabulous list called “Instructor Checklist for Continuity of Instruction,” and they put it together very quickly and sent it out to all the instructors and it tells you, ‘Here are some of the guidelines, here are things to check for.’ It’s one page and simple, but the biggest complaints that students are having are when instructors diverge from the list. Maybe it’s because instructors don’t know how to adapt their classes, but for myself, the biggest thing has been double and triple-checking that everything is DRES accessible, and I’m making sure I’m constantly communicating with my students. I’m now almost an over-communicator because one of the biggest complaints my students have is “I have no clue what’s going on in this other class,” which is probably because the teacher is trying to figure out what’s going on. So I text my students, as they can opt-in for a text from me, and I will give them my personal phone number. I also email them and allow them to call me. Another thing I have done, based on the U of I’s instructions, is provided options with really low bandwidth requirements. Some students need the traditional lecture to mentally stay afloat, others students have no bandwidth and need something downloadable and others don’t have much time and feel like they’re emotionally crumbling, so they need my help streamlining the learning for them. I allow students four different methods of receiving the material. They can go to the traditional lecture time through Zoom, I haven’t made my lectures any longer.

DI: You mentioned in your video that it didn’t make sense how suddenly some instructors had three times the work. Why is that?

Burkhalter: I don’t even know where that new material would be coming from, honestly. To me, you should be able to do it faster but that’s neither here nor there. I have the traditional lecture at the regular time for those students who miss their fellow students or want that continuity. I also have a downloadable PowerPoint lecture with transcripts from the notes section, so for students who want to hear my voice but go through it and review a slide over and over again, they can. We have a virtual tutoring center that’s open from 9 a.m. to 4 p.m., so they can click on one link and go in there to do the PowerPoint on their own.

DI: How much time did that take to come up with?

Burkhalter: I have the most amazing teaching team. I have a small number of TA’s, but my teaching team is also made of students who have taken my class before. Some of them have even stayed on the teaching team for almost three years. They’ll take it for class credit, and they get leadership and mentorship experience. So I turn to them and I turn to my students and I say, ‘What do you guys want? What do you guys need?’ and they tell me and I make it. So I’m not the one coming up with these ideas, this is not my brain power at all. That’s why I love having my teaching team because they know what the students want more than I do. I had my first lecture and I had my teaching team sit in and then I asked them what went good and what went bad, and they know me well enough to know that I want to hear what went good and what things can be improved.

DI: It seems like the University has been really helpful with this transition then?

Burkhalter: Yes, they’ve been amazing. For example, I’m someone who loves learning new things. I try to take criticism well when it comes to my instruction because it’s the only way to get better. When we found out we were going online, I had some people from the Center for Innovative Teaching and Learning (CITL) contacting me, ‘Toni can you try XYZ’ or ‘Toni, you can’t keep doing it this way,’ and so I sat on the phone with Erick Shumaker, who is amazing from CITL, and he talked me through what was going on. It’s all a collaboration across the University of Illinois. Another thing I found helpful is the instructor checklist, there are links where people can go and click to consult with some of the best consultants in the nation on the pedagogy, but I think instructors are sometimes just so overwhelmed right now so it’s hard for them to find the time to implement (new) ideas.

Your video focused on the advice you had for fellow instructors, but what have you said to these students who have contacted you about what they’re going through? What should they do if they do have professors that may not be as flexible?

Burkhalter: I have asked ‘have you spoken directly to them?’ They’ve said, ‘Well, I’ve emailed them and they seemed relatively dismissive.’ This is probably because the instructors are overwhelmed. I’m not disrespecting the instructors in any way. I’ll tell them to see if they can make a Zoom meeting with them or a phone call meeting with them and have a conversation with them because I’m trying to help my students be their own advocates and have the students keeping those lines of communication open.

The students that I think are having the hardest time doing this are the students who are first-generation college students because they are so excited about being at the University of Illinois, but they don’t want to be seen as less than appreciative or less than respectful, and they don’t know how to navigate these waters because their parents can’t necessarily guide them or advocate for them since they’ve never gone to the University. These are the students who are saying that ‘yeah we might have the phone-in mental health stuff but we’re in a tiny apartment right now and I want to talk about my home life and my mom is right there and I don’t want to disrespect her,’ so I think the biggest thing is showing the students how to self-care or how to advocate for themselves. The biggest thing that I talk to them on the phone is that ‘yeah it sucks, it sucks for me too. This sucks.’ I think being honest about how hard it is for everyone, including myself, but also the instructor they are probably concerned about brings a sense of empathy for them and gives them a little bit of an ‘okay, I get it now’ feeling. One of the other things that students can do is very nicely mention to the instructor, for example, ‘you’re asking us to have this software, but I noticed online on the instructor continuity of instruction, we’re not supposed to be purchasing any additional software. Can you speak to that?’ They can advocate for themselves with the University’s backing. It says that everything has to be DRES compliant and adhere to FERPA. If there’s anything on the checklist that the instructor is having a hard time with then the student can use that as a means to advocate for themselves.

Is there anything I haven’t asked you about that you’d like to mention?

Burkhalter: The biggest thing is that it’s just hard for the instructors, it’s hard for departments and the colleges of the University. It’s hard for everyone and we’re in this together, (it’s important to) keep lines of communication open. Be empathetic. Be understanding. I think it’s going to go a lot smoother (that way). When we start tearing each other apart and disrespecting each other instead of providing solutions, that becomes a bigger problem. Once I put up the video, I had more people reach out to me and say that they had really bad experiences with being violated in different ways and to have someone watch them take an exam was very unnerving for them emotionally. So when we say we want people to have proctored exams, it’s a great idea in theory but not all students have a computer camera or have audio, these are things instructors need to realize.