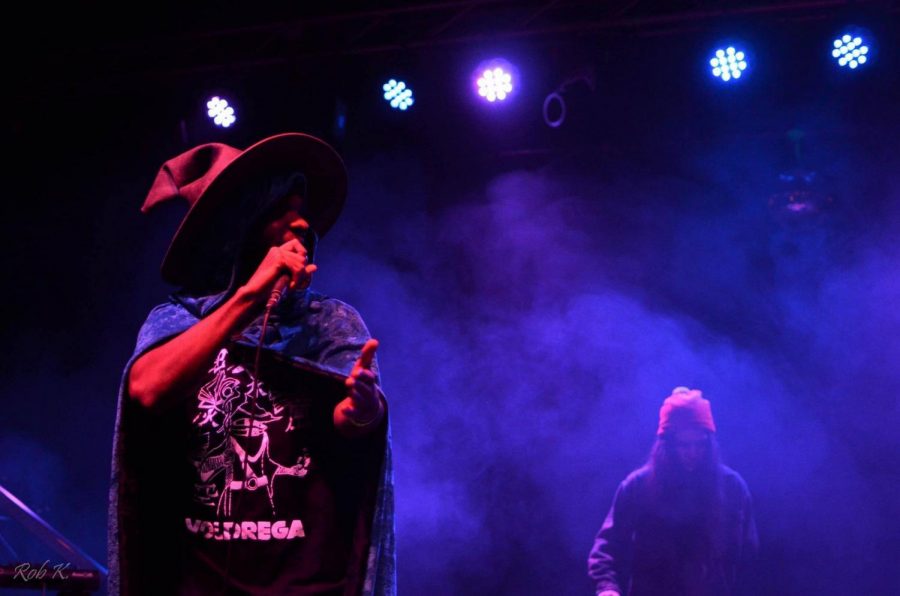 Local artist Black Mage performs at the Canopy Club on Dec. 8, 2017. He recently released his new EP, “Hold This L.”

Deangelo Brown wears many hats — most notably, his wizard hat. As Voldrega the Black Mage, the 32-year-old has emerged as a unique voice in Champaign-Urbana hip-hop. His latest offering, “Hold this L,” features beats by Lamont “The Letter L Beats” Holden, collaborations with a few local favorites and a generous helping of Super Smash Bros. references.

The Daily Illini spoke with Brown to learn more about how Black Mage and the “Hold This L” EP came to be.

The Daily Illini: Where are you from? How have your surroundings shaped you as an artist?

Black Mage: I’m from Champaign. I grew up in a very interesting cross-section of people, where I was sandwiched between “the hood,” the Children’s Home and then an upper middle-class neighborhood. So, I end up in this cross-section where I’m too Black to be white, too white to be Black, and I’m proving everything to everybody. It makes me super defensive, and I kind of withdraw. I start making music — poetry, I guess — when I’m 14. Start battling when I’m 15, 16, and start making music after that, and the rest is history. They called me Black Mage because I was a battle rapper. A mage is someone who uses magic. The color corresponds to the type, and black is destructive. It fits because I’m a tiny character with powers that seem larger than them.

DI: When did you realize rap was something you wanted to take seriously?

Black Mage: That is a super ironic question. I think my issue is that I’ve always taken myself too seriously. I believe that the position that musicians are in is an important one. If you have the ability to create, you create because musicians are the stenographers of the timeline. They paint a portrait of the world as it exists, and they make a road map for those who come after them. There have been moments where I felt joy from inspiring someone. I think a lot of people made this something that it wasn’t supposed to be for me, and now, I have found my Zen. I’ve found a balance in it. And hopefully, I can weave a little tapestry that somebody like me, some younger me, can use to grow — maybe a little easier than I did.

DI: Tell us about the story of you and Lamont’s (The Letter L Beats) partnership.

Black Mage: We worked together at (Illinois Summer Youth Music), the hip hop camp that we teach at the U of I. We worked together for the first year, and I was like, “Okay, he’s cool.” I thought maybe I could put something together where the students could see two of their teachers working together on something. And that’s kind of what this whole thing’s about. He sent me a series of beats. I dragged my feet like they had anchors attached to them, but I pushed it out.

DI: How has teaching hip-hop influenced the way you interact with it?

Black Mage: It’s sobering to look back and understand the impact — how much trust those individuals had in you at the time. Those kids turn into superstars. They explode. Being a part of that helped me realize that I am more than just the utensil. Helping the kids helped me realize that it’s bigger than me. I play a role in something bigger somehow that still lines up with my moral compass. That’s a very rare thing in music and business.

DI: What aspects of this process did you find most rewarding?

Black Mage: “Earth Bound” was the song that started the project. When I hear rap, I imagine each syllable as a foot hitting the ground. You ever played a side scroller game? Where the screen is moving, and you’ve got to keep moving? As soon as I heard that beat come in, I was like, “Oh, game’s starting,” and I wrote it in less than an hour. I don’t listen much to my own music, but “Earth Bound” will always get me up these days.

DI: As long as you’ve been making music, you seem to release it sparingly. What made this moment feel like the right one?

Black Mage: We see the same world through different lenses. And if you know how you see the world, it doesn’t matter how you see it, as long as you can communicate that. So, I will answer your question in this manner. I am a gamer. I play RPGs. When you play RPGs, you have a character, or a team of characters, that you have to build. For whatever reason, no matter how good I am at a video game, I always get the build wrong the first one or two times. Because I’m good at a bunch of things, but not great at any one thing. I recognize that trait about myself. And it’s one of the reasons I withdrew because I knew I needed to give myself more time to blossom and understand the world before I started placing my marker on it. My mission is to get the world to understand each other a little better. And in order to do that, you kind of have to be sure of what you’re putting into the world. Even now, I’m unsure, but as an older gentleman, I’m realizing that life is playing in the rain.

DI: In your EP description you say, “Black Mage paints us a portrait of his world.” Can you tell us more about your world?

Black Mage: I feel as though nerd culture is one of those things that is anti-accepted in the Black community. So, I try to make Dungeons and Dragons, anime and comic books as hip hop-acceptable as I can because I know there is great wisdom in those stories. I know Dungeons and Dragons teaches you things like critical thinking, and people really don’t understand how bad they are at critical thinking until you give them a character that they think they understand and put them in a scenario. And all of a sudden, up is down and left is right. And people are so righteous until you really place them outside of things.

DI: If you could only listen to three artists for the rest of time, who would they be?

Black Mage: Number one would be ABBA, hands down. I used to get in trouble at work because my boss could see us. We weren’t supposed to change the music. When she left, I would change it. And I’d get a call. She’s like, “Deangelo, I told you not to change the music.” I’m like, “I didn’t.” And she’s like, “You’re doing your ABBA dance. You’re doing your Mamma Mia dance.”

DMX is my favorite rap artist of all time. He’s the only one that can go from talking about murder to crying about his grandmother without losing a drop of clout.

Kanye West. I don’t care what anybody says. To me, his story is indicative of everything I mean when I talk about the hypocrisies of man. They told him his beats were trash, he got platinum plaques. They told him he couldn’t rap, he became the biggest name for five straight years. I won’t say that everything he’s done is kosher, but I will say I understand how media works, and a lot of people like to pretend they don’t understand how the media works. Kanye, he’s got bangers – bars and beats.

Black Mage: Zelda, hands down. I’m probably the coldest with Zelda. If I pick Zelda, expect to take an L.

Next, I want to say, Ness. And here’s the thing — I’m actually low-key kind of trash with Ness, but for me, it’s not about winning; it’s about doing things that I find spectacular. Like you’re going to throw a Pokeball at me, and I’m going to catch it point-blank and throw it back in an instant. I wasn’t even trying — I was trying to attack you. But, “doo doo!” and you died.

Now I’m down to the person I’m best with versus my favorite character. Because the Belmonts — Castlevania is an important series to me. But I’m better with Ike.

DI: What sort of meaning or feeling do you want listeners to take away from the EP?

Black Mage: I’m not sure I wanted people to take a meaning or a feeling. I think I just wanted people to take a moment and think and listen and enjoy a perspective that you’re not always going to get to hear. And so, hopefully, people can find something to latch onto within the piece. And if not, then I have failed them. But I have not failed entirely because I have a whole lifetime to get them onboard.