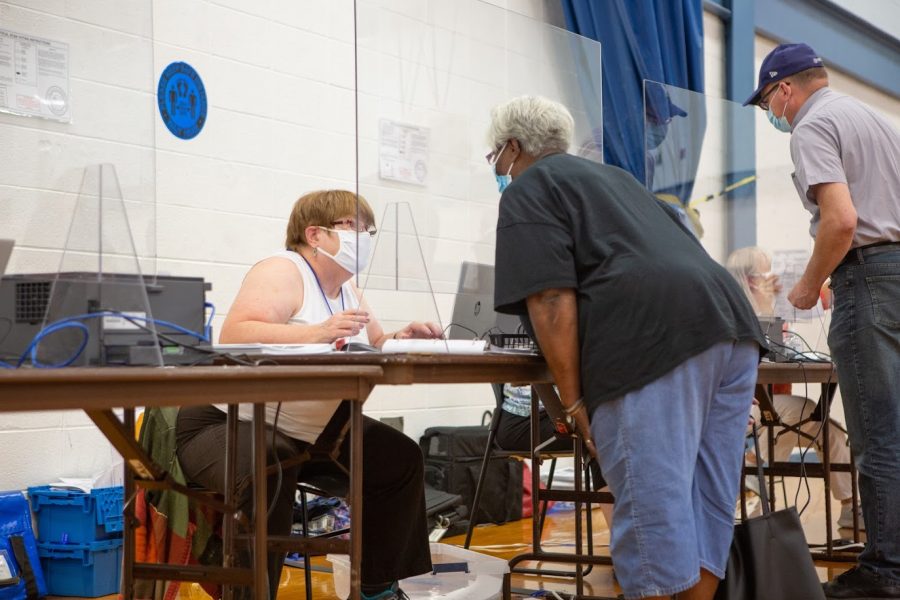 Due to social distancing guidelines and the Center of Disease Control’s recommendations, local election officials and organizations are strongly recommending voters to cast their ballots through the mail instead of voting in-person.

The usual controlled chaos of conducting an election has become more complicated due to the COVID-19 pandemic, something that election officials, students and voters alike are adjusting to in terms of organizing vote-by-mail and holding virtual events.

“It’s been extremely busy, extremely detailed and nuanced for us to run this election amidst the pandemic and the insertion of vote-by-mail to the degree that it’s been made accessible,” Champaign County Clerk Aaron Ammons said.

Ammons said that implementing vote-by-mail has been an “extraordinary feat,” calling the office to run two elections at the same time. But he is insistent that voting by mail is safe, secure and very convenient.

“We haven’t had any widespread issues of voter impersonation,” he said. “As the local election authority, I will be voting by mail … I would not tell people to vote-by-mail if it was not safe and secure.”

Across the 118 precincts in Champaign County, there are about 120,000 registered voters. Approximately 117,000 mail-in ballots have been requested. The first 25,000 ballots were mailed out on Oct. 2.

The County Clerk Office is unable to report specifically on how many registered voters are students at the University of Illinois at Urbana-Champaign.

One in-person voting location, the Brookens Gym, has been open for Champaign County since Sept. 24. An additional 11 locations will open on Oct. 19, with three being on campus.

One location will be at the Activities and Recreation Center in multipurpose room five or six, Ammons said.

As of Friday, 3,400 voters have cast their ballots in-person at the Brookens location.

Voters can also now use the drop box located at the northwest corner of the Main Quad in front of the Illini Union. The drop box opened on Sept. 26.

This location was chosen because of the high foot traffic that surrounds the  Illini Union, as well as making sure that University students had the same access to vote-by-mail as the rest of the community, Ammons said.

The pandemic has also forced student groups and organizations to think creatively with their usual voter initiatives.

“We can’t really go on the (Main Quad) and get people registered ourselves,” she said. “We recently launched our own website, and that’s a really unified place for students to go to understand a little bit more and find resources.”

The organization is making use of social media and its website to inform students on voter registration and the candidates, including local election information, Foster said.

“It’s important to vote because our local elections truly do affect our day-to-day life as students,” she said.

The Daily Illini reached out to Illini Republicans for a comment and received no response.

The Illinois Student Government Director of Government Relations, senior Madison Jackson, said she had to find creative ways to engage students on a virtual platform.

“Rather than trying to focus on students on campus, it is a statewide effort because I know students are scattered around,” Jackson said.

A lot of Illinois Student Government events are focused on issue-based education, such as virtual teach-ins about how to be better allies to undocumented students or fossil fuel use at the University.

Jackson and her department are concerned with continual education — not just during election season — and helping students who have more privileged backgrounds understand those from marginalized backgrounds, she said.

“The election is more likely to impact students in different ways,” Jackson said. “It’s important to vote because it’s a way to participate and maintain civic engagement.”

First-time voter Lily Greenberg, a freshman in Education, hopes that her generation is ready to be engaged and not sit this election out.

“Voting is the main source of change we have … but people should continue to take action after voting too,” she said.

Along with taking action, Ammons hopes that voters will remain patient and focused after the election.

“I know this is a very charged election cycle for so many different reasons,” he said. “We should not feed into dissension and into the undermining of our electoral process.”

The Brookens Gym at 1776 E. Washington St., Urbana, is open for early voting from 8:30 a.m. to 4:30 p.m. Monday through Friday. Voter registration can be done in-person or online at the Champaign County Clerk’s website.

Vote-by-mail ballots can be requested until Oct. 29.

Editor’s note: President of the Illini Democrats, Madelyn Foster, is a former The Daily Illini employee.