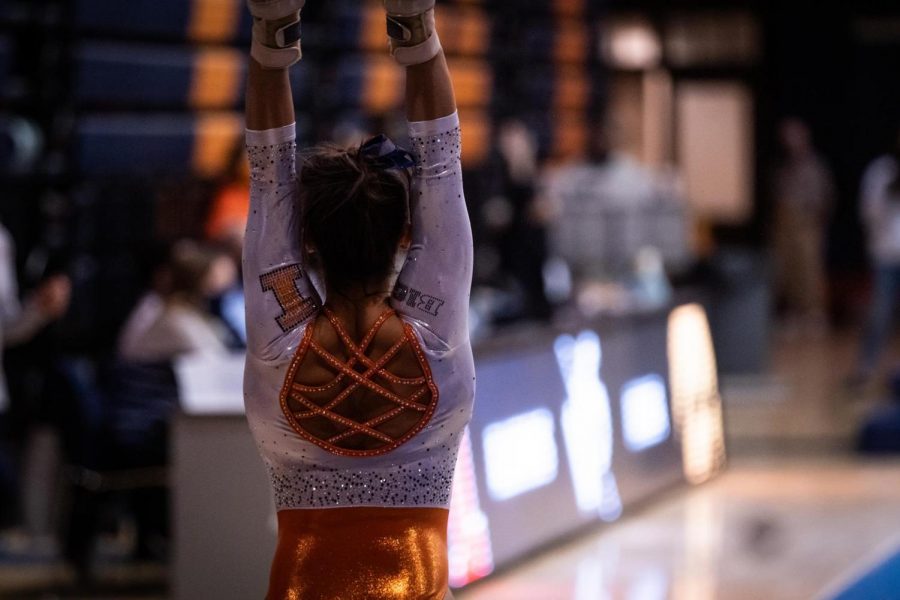 Sophomore Mia Townes prepares to compete during the meet against Iowa on Sunday.

“On the floor they did a great job with their landings, and they paid a lot more attention to detail,” said head coach Nadalie Walsh. “We followed Iowa and they were number one in the country on the floor and we just beat them. I think that’s a big boost of confidence. We have great showmanship, great routines and we take any team head to head — we just have to make sure we put all four events together.”

“We got better on three events today,” Walsh said. “Our bar mistakes were not characteristic of us, and I know we can do better. We will take this meet and learn from it.”

There was improvement on vault, beam and floor this week. But it was a struggle on bars, though they’ll look to fix it when they resume matches. The meet against No. 7 Michigan on Feb. 6 was postponed because of COVID-19 concerns within the Michigan athletic program.

Walsh says she is proud of how the beam team was able to win the event overall, even if individually the top two spots were taken by Iowa. She highlighted the aggressiveness of the beam team and how their consistency in practice carries over to the meets.

Individually the Illini won one of the four events and tied on two events. On vault sophomore Mia Townes won by tying her personal best of 9.850.

On beam Iowa freshman Adeline Kenlin won with a score of 9.900. The highest Illinois score for the event was a 9.850 by Scott and sophomore Mia Takekawa.

This is the Illini’s second consecutive home Big Ten conference opener loss. Last year they lost to No. 16 Michigan 196.700-195.650. This is also the third time in four years the Illini lost their overall home opener. The lone win over the time frame was last year against Temple, which Illinois won 195.525 to 192.550.

Next the Illini travel to University Park, Pennsylvania, for a meet against No. 31 Penn State Feb. 13.