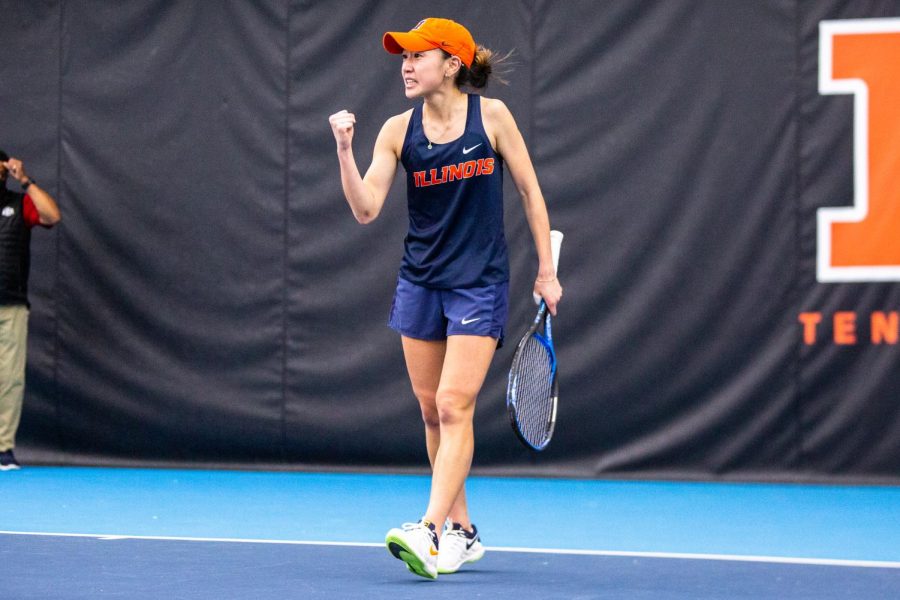 The Illinois’ women’s tennis team defeated Indiana and Purdue this weekend at the Atkins Tennis Center. With this pair of wins, they move to 5-6 on the year, inching closer to the .500 mark.

On Saturday, the Illini opened up play against the Indiana Hoosiers, who came into Urbana with a 1-8 record. Illinois started out strong and did not look back, as they dominated in both the singles and doubles competitions.

The Illini won five of the six singles matches in straight sets, and won two doubles matches (while leaving the third unfinished).

Sophomore Ashley Yeah had a successful weekend at the Atkins Tennis Center, especially against Indiana on Saturday. The California native won her singles match 7-6 (7-2), 6-3 and her doubles match 6-2 with Kate Duong.

Yeah was proud of the team’s performance over the weekend and hopes to continue the momentum over the course of the season.

“We all put in a really good group effort on Saturday,” said Yeah. “It’s been a really long time since we swept a match. There were a lot of tough points out there, but I’m glad we were all able to play well in the pressure situations.”

Moving on to Sunday, Illinois continued their solid play with a 4-3 win over the Purdue Boilermakers, who came into the contest with a 3-7 record. The Illini won four out of the six singles matches, and although they dropped two of the three doubles matches, it was enough to secure the victory.

Asuka Kawai, Emilee Duong, Ashley Yeah and Josie Frazier were all victorious in their singles matches. Yeah continued right where she left off the previous day with a 6-1, 6-3 win against Purdue’s Seira Shimizu.

Head coach Evan Clark is pleased with his team’s efforts and is enjoying Illinois’ push to finish the season with a winning record.

“Really proud of the way the team continues to navigate the season,” Clark said. “They have never given up by any means and they keep working and trying to find a way to win matches.”

Next weekend, Illinois are back on the road for another Big 10 doubleheader. This time, they travel up north to Wisconsin on Friday for a match against the Badgers. Then on Sunday, the Illini will face off against Minnesota in the Twin Cities.

The match against Wisconsin will begin on Friday at noon CDT, and the match versus Minnesota will start on Sunday at 10:00 a.m. CDT.