Illinois narrowly lose in Madison, bounce back for comeback victory in Twin Cities 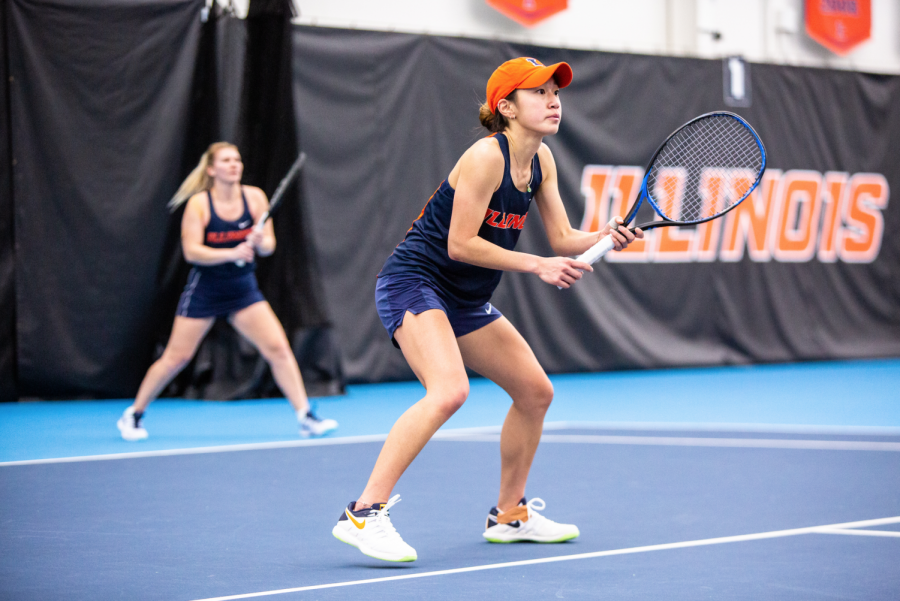 Senior Emilee Duong waits for Wisconsin to return the ball at Atkins Tennis Center on Feb. 26. The Fighting Illini women’s tennis team narrowly lost to Wisconsin, but pushed through and won against Minnesota this weekend.

The Illinois women’s tennis team was back on the road this weekend, as they had another Big Ten doubleheader. This time, the Illini played against the Wisconsin Badgers and the Minnesota Gophers.

The weekend began in Madison for the 5-6 Illini, as they faced off against the Badgers on Friday. The Badgers came into the contest with a 7-6 record, ranking #48 in the country.

Illinois got off to a strong start, as doubles duos Sasha Belaya and Emilee Duong, along with Ashley Yeah and Kate Duong both won their respective matches.

When the competition turned to singles, Wisconsin took over. The Badgers won four out of the six singles matches, narrowly edging out the Illini as the final score was 4-3. This was the second time this season Wisconsin got the better of Illinois by a tight score of 4-3.

Duong was not totally pleased with the team’s performance on Friday but gave props to Wisconsin for coming out with a different mindset for the singles matches.

On Sunday, Illinois traveled to Minnesota for the second half of their doubleheader. The Gophers came into the match play sitting at 3-9, toward the bottom of the Big Ten.

Sunday’s matches were a complete opposite of Friday’s, as Minnesota got out to a hot start in doubles, winning two out of the three matches. When the teams moved on singles, Illinois caught fire, winning five out of the six matches.

Duong dominated her match against Minnesota’s Dalila Said 6-1, 6-2. She believed a change of mindset (plus some new equipment), helped her perform well against the Gophers.

“Today was just one of those days where I was feeling really good,” said Duong. “I had a new racket and everything was just fresh and ready to go, I had a reset mindset.”

After these two matches, Illinois moved to 6-7 on the season and will welcome the Michigan State Spartans to Urbana on April 9. The Illini and the rest of the Big Ten will have the next weekend off.

Before the match against the Spartans, there will be an announcement from the Big Ten about whether the matches will be played indoors or outdoors for the remainder of the season. Based on the weather in Champaign recently, I think the players and coaches alike are hoping for the latter.