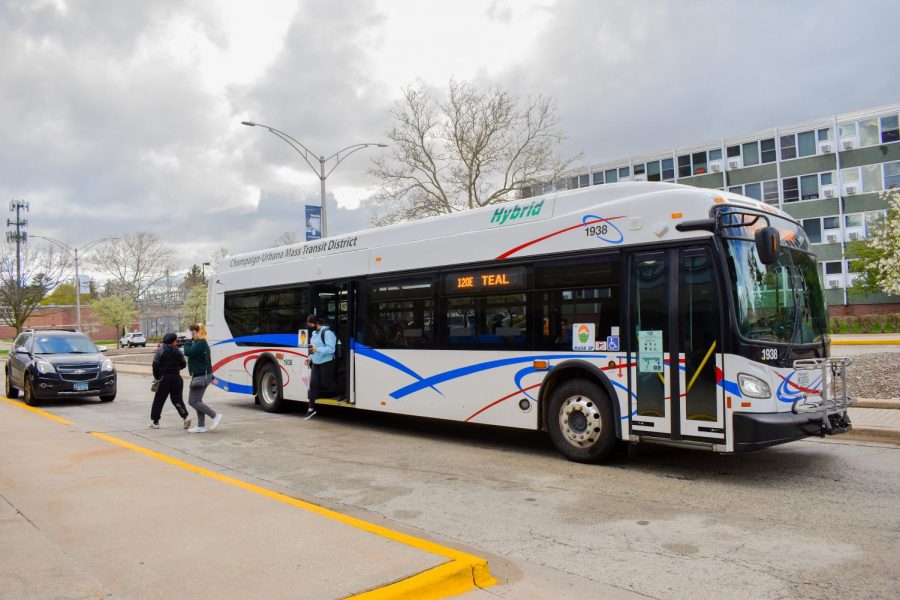 University students exit the Champaign-Urbana Mass Transit District 120 Teal bus outside of the PAR dorm on Saturday. CUMTD will release two hydrogen fuel buses this fall to cut down on carbon emissions.

The Champaign-Urbana Mass Transit District has ordered two hydrogen fuel cell electric buses, which will be in service this fall in order to curb carbon emissions.
This change has been made because the new buses do not produce tailpipe emissions. These buses have a comparable range to the current fleet, which is diesel and diesel-electric hybrid, and are also quieter than the current buses.
“Hydrogen buses can be used in service much longer, and you don’t need as many compared to battery-electric buses which need to be stopped and charged frequently,” said Timothy Lindsey, senior advisor to the University’s Smart Energy Design Assistance Center.
Most battery-electric buses are charged off the grid, leaving a carbon footprint, while the hydrogen fuel cell electric buses can produce the fuel with 100% renewable power.
This stems from the fact that hydrogen can be produced anywhere with electricity and water available, using a process called electrolysis: An electric current is used to split hydrogen from oxygen.
“The hydrogen fuel cell electric buses have a close cost parity with diesel,” Lindsey said, who estimates that the cost of electrolysis should plummet over the next 10 years.
The electric vehicle uses compressed hydrogen as an energy source. The bus has a fuel cell that acts as a continuous battery charger to extend the range of the vehicle.
“Yes, MTD strives to reduce our environmental impact, including fossil fuel consumption and vehicle emissions,” said Jane Sullivan, CUMTD director of Grants & Governmental Affairs Director of CUMTD.
Sullivan added that the only output from the tailpipe is water vapor that is clean enough to drink.
Hydrogen has been deemed as a potential source to meet energy requirements while curbing carbon emissions, according to Lindsey.
Apart from being used as a fuel cell, it can be used with oxygen from the atmosphere as a source of heat or as a source of power for a combustion engine. Either way, water vapor is the only emission produced.
The MTD will continue purchasing diesel-electric hybrid buses.
“In the near term, we will have a fleet mixed with both hydrogen and hybrid buses,” said Sullivan in an email. “There is also potential of adding battery-electric buses and renewable natural gas to the fleet in the future.”