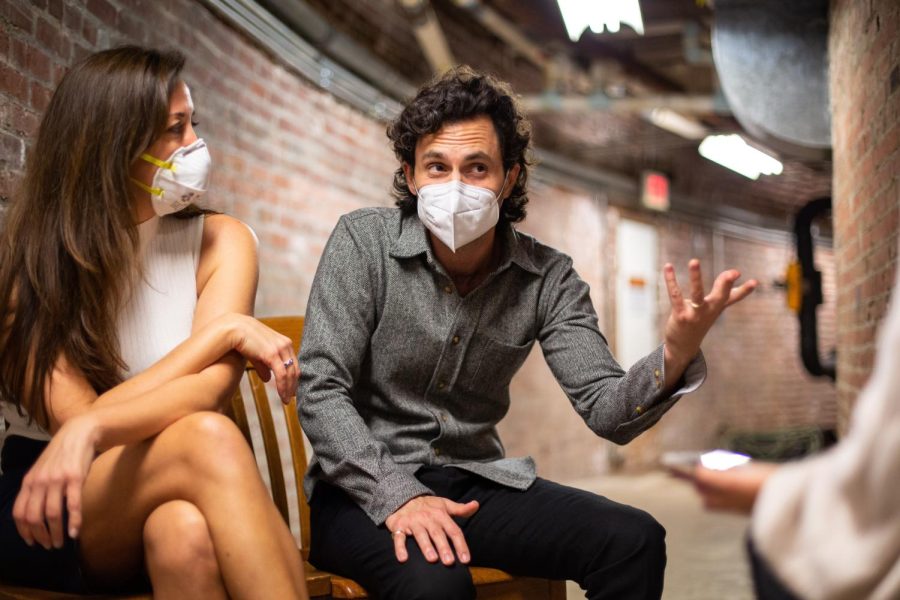 Actor Penn Badgley and Arizona State University professor Nura Mowzoon speak with buzz Editor Carolina Garibay about their “Can We Talk?” discourse series Thursday. The University of Illinois was the pair’s first in-person stop since the pandemic.

Actor and advocate Penn Badgley (“You,” “Gossip Girl”) and teacher at Arizona State University Dr. Nura Mowzoon visited the University of Illinois campus Thursday as a part of their “Can We Talk?” series, hosted by the grassroots social justice RSO Organic Oneness. The two talked about the importance of strengthening intimate relationships and answered students’ questions about various topics having to do with relationships, social justice, racism and more.

Buzz sat down with Badgley and Mowzoon to talk about why they visited campus and the challenges Badgley often faces as both an actor and an advocate.

buzz: Why is it important for you both to be here today?

Penn Badgley: That’s actually a really good question. I think we have our own sort of personal hopes, as we do this more. I would say just maybe generally, I’m a person with a platform and Nura in her field as a teacher, as a professor and instructor at ASU. We had a friend in common, and she used to be a teacher and is now working with me in media as a partner in production, development and writing. Through this friend, I thought that maybe I could share some insights about what it’s like to sort of work inside this massive love and romance storytelling apparatus, not just the shows that I’ve been on, but Hollywood tell us love stories, right? Understanding that some of the very prevalent misconceptions in a lot of these love stories have very clear detrimental effects on the way people relate to each other in that they just simply create and perpetuate misconceptions about relationships, both friendly and romantic. And so, in her own exploration of these things in her field with her students, was wondering if maybe I could share insights. And meanwhile, little does she know, this is exactly what I was thinking about. This is all I think about actually, professionally.

Nura Mowzoon: I thought about media a lot. It’s hard not to in sociology classes. I thought about it a lot, especially because people talk about their expectations or what they think it’s supposed to be. They’re programmed in one way when reality is very different. Programming is very specific in media.

PB: It was kind of born from (Nura’s) question to get in touch with me. But what’s really lovely about it is that I actually have been thinking quite systematically about this very thing for a long time. So, in our first conversation, it seemed like there was something there to explore. We weren’t exactly sure what. This is actually only the second time that we’ve done this like this: We’ve done other things on Instagram Live, we’ve done a couple of interviews that we’ve done. But, this is only the second time we’ve been, like, onstage at a campus like really doing an organized event with a lot of people in attendance. And I think we’ve seen a lot of progress from the first one, like, I think the concept of the idea is proving itself in a way. I think tonight, the questions that people have were, to me, proof of concepts. It was like, people had really thoughtful questions. They warranted thoughtful answers, you know?  I’m really, really happy to see the response because that’s really actually what we were kind of betting on.

NM: Yeah, I think people are hungry for these kinds of conversations, and I think that your celebrity or fame is kind of the draw, but then we don’t hang out in that space, and then the conversations kind of get super deep super fast. But they go there, and they’re eager to, and like you said, their questions reflected as well, and I think that’s just reflective of the hunger that everybody has for deeper, more meaningful conversations and relationships with one another. It was so natural that it felt like it was something that was maybe just dormant in a lot of us but woke up like that.

PB: Yeah, because I actually feel, to be honest, that once we really turned it over to just the Q&A or A&Q, because everybody kind of had their own issues too. Like, that’s when I think it really came alive, you know. We took, I don’t know how long it was, we took a little bit of time to kind of set the premise. And I think the point is that we’re going to get better and better at just setting that premise clearly and quickly and then opening it up for everyone else.

buzz: I want to talk a little bit about your show “You.” Obviously, it’s the eve, like you said, of season three. And on that show your character is abusive in lots of ways, you know, physical, emotional, mental. But you are a big advocate of speaking out, against emotional abuse and those types of things that you have to portray on-screen as your character. A big part of that too is this month – I’m sure you know – is Domestic Violence Awareness Month, and a lot of women who are living out some of those experiences that are in that show. So how are you able to balance acknowledging those realities of many women but still play this toxic character, and is that hard for you to do?

buzz: There are a lot of shows that depict this kind of abuse and maybe romanticize that kind of violence and toxic relationships. How can people watch those shows but still kind of at the same time acknowledge that that behavior is not OK and feel safe in their own relationships so that they don’t think that that is OK and then take that into their own real-life relationships?

PB: Well, that question is super important. And I don’t know how accurately we’ve measured the effects of media on our behavior. We know that it has an effect. I think, even right now, there’s this conversation – I won’t name names – but it is about the effects of thinking and words resulting in actual violence, whether in groups of people or just between two people. I think I’ve been, thank god, I’ve at least been consistently vocal about it, so I don’t sound like – I don’t know – like a hypocrite. I think my show’s success must be representative of a certain duality or cognitive dissonance that we just as I think Americans in particular – certainly others but I think particularly Americans – are experiencing. So, I mean, to go back to your question – and I am curious what (Mowzoon) thinks – you’re asking how can we watch something – anything that’s so very violent in its depiction of a relationship, portraying domestic abuse – how can we know that is or isn’t creating that literal thing in the world. I think we’re asking that question. It’s a very important question. If somebody could tell me, and the creators of my show conclusively, “Hey, this is having a net negative effect,” I would like to think that we would have a conversation and stop making it. But that’s a fantasy where we would get that conclusive information,

NM: But I would like to say – because I don’t think (Badgley) would say this – we were just talking about this 10 seconds before we walked out here but as much as there is a duality in terms of the character that you play and what you stand for, I personally, as a friend and as a consumer, I would rather see somebody like Penn play this character, who plays Joe Goldberg in one space, but then is intentionally having conversations unpacking that and deconstructing it in larger spaces versus somebody who thinks it’s just great and indulgent and fantastic and has no issues. So I will say, as Penn’s friend, you’re asking the very question that he’s thinking about all the time.

PB: It’s a question that actually makes me uncomfortable. I think to speak to what we’re even talking about, – having difficult conversations – like when I was thinking about taking the show, my wife and I had to have this like conversation like, should I shouldn’t I take it, what effect is it gonna have? And then we continue to have those, and it evolves, and we have different answers at different times, and there are times where it’s hard. And even (there are times) – kind of distancing it from this particular show because I also want to be respectful to all those involved in making it – where we are all asking those questions, and then I think the point is, I (Mowzoon’s) even said this before, like a little bit of a slogan like we need to become more comfortable with being uncomfortable. And I guess what I’m trying to be transparent about is it makes me uncomfortable. It makes me uncomfortable. And I’d like I said before, I don’t think I have the right to simply be comfortable in that, you know? So this is what it looks like to try and work with it.

buzz: You talked a lot about the importance of having this massive platform that you do have as an actor and using that to spread good and awareness of different issues. Do you think that’s a responsibility that all actors or people who have that space should have?

PB: Well, again, my perspective is somebody who always has to be critical of it, and then (Mowzoon’s) perspective is another person’s perspective doesn’t have the fame in their lives like is gonna have that, like, “No, but you should you should try it,” right, so I’m always having to think about when I shouldn’t. Anybody in my position should think about that more – when you shouldn’t. We need to actually, I think, less celebrities is telling us what to do, and I think we need less individuals wielding influence and power over so many. One person is one person. One person should never be that influential, however, we do have that kind of social structure, so for the time being, it’s a dance.

NM: The thing is that, as much as we say celebrities shouldn’t be given the space that they are in a platform that they are, they have it. It is what it is. I think acknowledging the reality that it is what it is matters. And I think it matters when celebrities speak out on important issues, I don’t think it’s (Penn’s) responsibility or anybody’s responsibility to say what other people should be doing. But, I think that it would only be beneficial if more people with a bigger platform used that that superpower for good rather than the negative.

You can stay updated with Badgley and Mowzoon’s “Can We Talk?” series on their Instagram @canwetalkseries.

Check out the “Can We Talk?” series event recap at University of Illinois here.