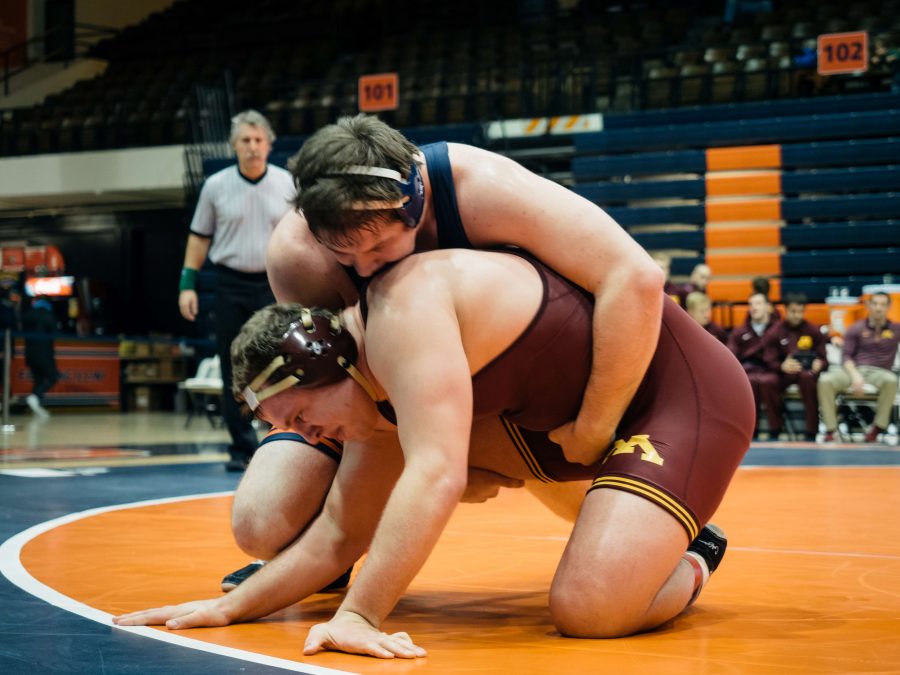 Illinois’ Brooks Black wrestlings with Minnesota’s Michael Kroells during the match on February 12 in Huff Hall.

Breakdowns of each weight class for Illinois wrestling

By Masaki Sugimoto , Editor in chief

Here are the 10 weight classes to watch for this upcoming season.

125 pounds
This weight class certainly is not the one that other squads feared during the reign of Jesse Delgado. Francis Edelen held the spot last year. He goes into the season with the most experience, along with freshmen David River-Kohr and Travis Piotrowski who are starting their collegiate wrestling careers. Look for different starters at the lightest weight class.

133 pounds
Fifth-year senior Zane Richards will be looking to top the podium at the end of the season. Richards placed fourth last season after losing to Oklahoma’s Corey Brewer. Two freshmen are in this weight class, but don’t expect to see them competing at 133 unless something happens to Richards.

141 pounds
The 141 pound spot will be up in the air since the last leg of last season had Mousa Jodeh as the starter after Brock Ervin was injured part way through the season. Erivin’s high school career included five state titles.

149 pounds
This weight class lacks any definite starter. The roster lists the former starter, Kyle Langenderfer moving into 157 pounds. Among the five wrestlers for Illinois in this weight class, there is only one college match between them. That one match belongs to redshirt sophomore Isaac Reinemann. Reinemann went 4-1 at the EMU open.

157 pounds
There has only been one loss in this spot in the last two years: Isaiah Martinez won two championships at the position, but is listed at 165 pounds this season. Kyle Langenderfer moves into the weight class from 149 pounds, where he had a less than stellar season as a sophomore.

165 pounds
According to the roster on the Fighting Illini website, Isaiah Martinez will be going into this year at 165 pounds. The two-time champ at 157 pounds, Martinez has been the main attraction for fans of Illinois wrestling for the last two years. One of the most interesting rivalries in college wrestling was Martinez against Penn State’s Jason Nolf. Both wrestlers have only ever lost to each other in their college careers. Time will tell if this weight switch marks the end of this rivalry.

174 pounds
Zac Brunson did not end last season strong when he lost in the fourth round of the consolation bracket at the NCAA tournament. In his final season, Brunson will be looking to finish stronger and hopefully stand at the top of the podium in his weight class.

184 pounds
Both Danny Hicks and Emery Parker did not get much experience in official NCAA matches. Illinois has stars at certain weights, but many unproven wrestlers at several weight classes, including the 184 class. Illinois has not had as notable of wrestlers in this class in the past few years. Hicks and Parker may be the change.

197 pounds
Jeff Koepke graduated after getting eliminated in the NCAA tournament last year. Andre Lee will likely be the starter as he went 10-2 in non-conference. Lee will need to make strides in Big Ten matches to get good seeding come the big ten tournament.

Heavyweight
Brooks Black will be looking to take another step this year. The heavyweight lost to Minnesota’s Michael Kroells for the second year in a row. The likelihood he will topple defending Olympic champion Kyle Snyder of Ohio State is unlikely, but the wrestler should be looking to make another leap in his standings this year and potentially go for his first All-American placing.