Over 1,100 new cases since classes began. What’s next? 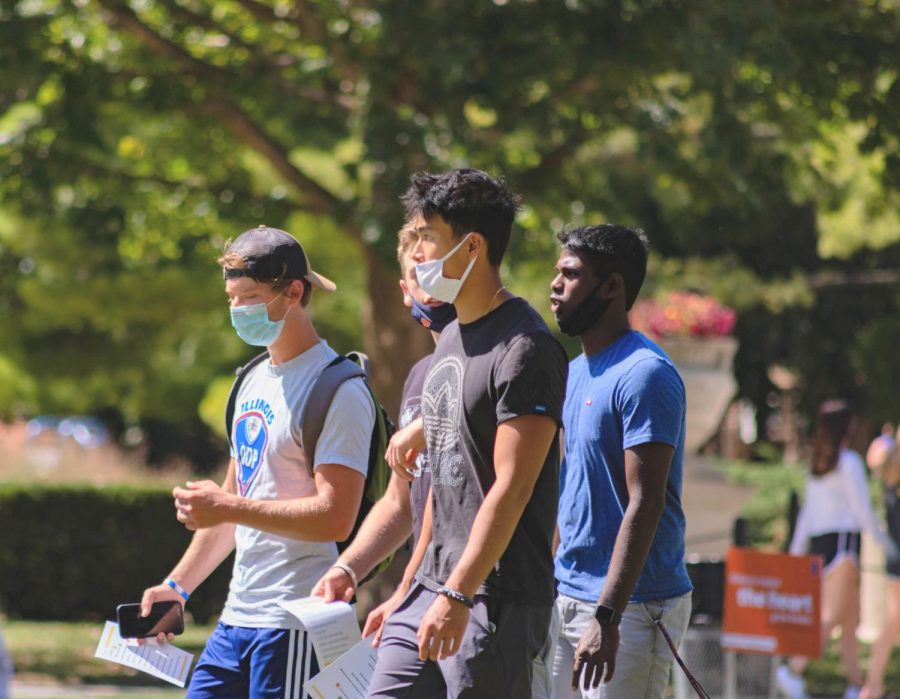 Students wearing masks walk through the Main Quad on Aug. 21. Since classes began, there have been over 1,100 new coronavirus cases on campus.

Since University students began classes on Aug. 24, a whopping 1,138 students, faculty and staff have tested positive for COVID-19 through campus’s saliva tests.

For the most recent five days of testing where University data is available — Aug. 30 to Sep. 3 — 741 people tested positive on campus. Since move-in began on Aug. 16, over 1,400 people have tested positive.

A surge of over 330 cases in just two days compelled University officials to impose new restrictions on student movement for two weeks, starting Wednesday. Nothing is allowed but the “essential” for undergraduate students: going to classes, getting food, getting tested, working, attending religious services, getting solo outdoor exercise or receiving medical attention.

Shortly afterward, the University’s Senate Executive Committee held an emergency meeting with experts from the SHIELD team and Champaign-Urbana Public Health District. They contextualized recent COVID-19 numbers and revealed new data about the state of the University’s COVID-19 response plan.

Because of the long incubation period of COVID-19, all the dashboard’s figures and most available COVID-19 data are signals from the past.

“The numbers you are seeing right now are really the results of the early social activities that were going on the first week of classes,” said Rebecca Lee Smith, an associate professor of pathobiology who helped develop the University’s saliva test and on-campus protocols.

From what the data show, the first week wasn’t as safe as the University hoped. Despite planning for some student noncompliance with COVID-19 policies, the University’s primary model predicted about 700 cases through the entire fall semester.

Though the SHIELD team hasn’t heard much directly from the students who chose to attend or host parties after testing positive for COVID-19, some of their friends have relayed what rationales they heard.

“There’s two main messages. One is ‘we’re going to get shut down anyways; have our fun while we can,’” Smith said. “The other is: ‘It’s not going to affect me.’ There’s some amount of feeling that ‘I’m not gonna get sick, none of us on campus are going to get sick, it doesn’t really matter.’”

Others have downplayed the morbidity of the virus or called for students to go for herd immunity, she said.

Since the University began reporting new cases, as opposed to daily positive tests, there’s been a noticeable lag in data.

The reason: Counting new cases is a manual process, where workers have to match new positive tests to a person’s testing history. It’s a process the University hopes to automate, said professor and SHIELD team chair Martin Burke.

So far, CUPHD has not found any evidence of virus transmission from the campus community into the rest of Champaign-Urbana, and no known cases have come from students going to class.

Of the clusters the district has identified, most are within 10 to 15 dorms, Greek Houses and private certified housing spots on campus, Vaid said.

Some of these cluster locations have had more than 10% of their residents test positive. Additionally, around 80% of all new cases in the previous two weeks within Champaign County were from students, Vaid said on Wednesday.

According to Smith, the majority of campus cases have been asymptomatic.

Another key component to the University’s COVID-19 plan is the Safer Illinois app. It’s been downloaded over 39,000 times, but for privacy reasons, much of the more revealing data isn’t available.

Illinois’ administration hasn’t provided a clear threshold for when campus will shut down, other than saying the University will obey state and local guidelines. Under Phase 4 of Illinois Gov. J.B. Pritzker’s Restore Illinois plan, regions are subject to additional restrictions when test positivity exceeds 8% for three consecutive days.

The University tracks the percentage of tests that turned up new cases. For last week, the new case positivity rate was 1.14%. On Sunday, Aug. 30, 2.86% of the tests revealed a new case of COVID-19.

Compared to other universities’ case counts, Illinois’ total “looks bad,” Smith said. However, by testing essentially everyone on campus, the University is fulfilling a key prevention strategy: identifying asymptomatic carriers.

“The number of cases we have is the iceberg,” Smith said. “They have the tip. We are catching this much much earlier than any other University I’ve seen.”