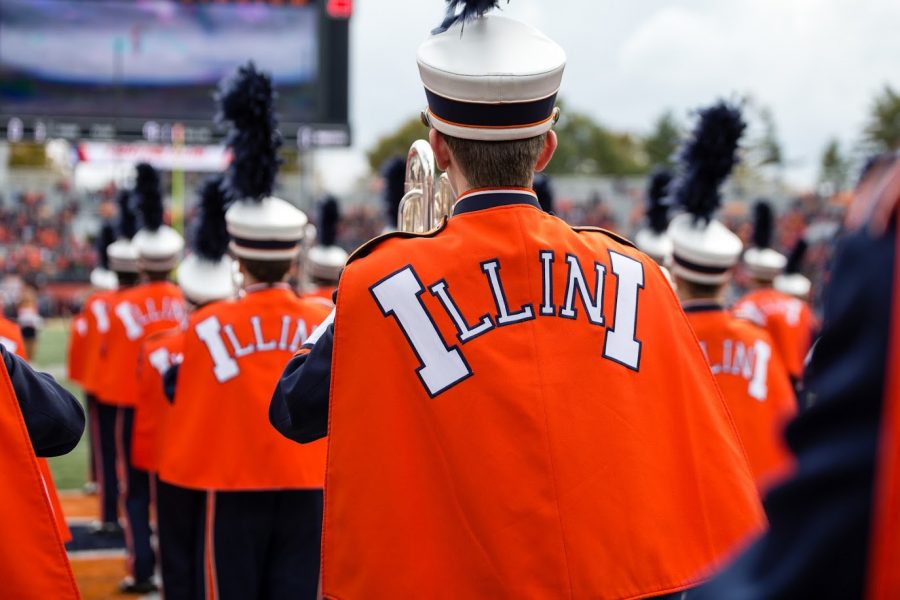 Members of the Marching Illini stand in the end zone before the game against Minnesota at Memorial Stadium on Nov. 3, 2018. The Marching Illini recently performed during the 100th anniversary of the Altgeld bells.

The feel of the football season is certainly not the same without the fans cheering and the band playing.

Instead, Memorial Stadium is packed with over 300 cardboard cutouts of Marching Illini performers, with pre-recorded touchdown and end-game winning performances that are played throughout the football game.

“It’s still not the same, but we are still part of the experience and that’s the key thing for us,” said Barry L. Houser, director of athletic bands. “We are able to support our team no matter what, and that they hear and at least see a little bit of our support for them along the way.”

Since the beginning of March when COVID-19 hit, every student at the University was impacted, but for students pursuing fine arts and music, the experience has completely changed.

With the Marching Illini’s band having over 400 student members, the pandemic certainly had a “significant impact on the students, as coordinating rehearsals and practices over Zoom was just impossible,” Houser said.

Because of the latency issues over Zoom, this has become a challenge not only for Illinois but for many other schools in the U.S., Houser said. Instead, the students have been utilizing the extra time to learn more about inclusiveness and diversity, and open up more about how they’re doing along with their mental health.

These aspects, Houser believes are something never really talked about in a normal football season with so much going on, but he believes that the most important thing is “continuing to engage and meet, just being able to have a conversation, which is hard to do these days.”

Houser organized a performance by a small, senior group of Marching Illini members to play during the 100th celebration of the Altgeld chimes on Oct. 30.

As there were a lot of wind instruments during the event, intensive research studies were done on aerosol particles produced by such instruments months prior to the event. Bell covers and special student masks were created just to help negate the spread of these particles. Houser was able to share these research results with high schools and colleges and was eventually contacted by the Illinois Department of Public Health.

“We were able to share the research information, and the IDPH and our team were able to create some really safe guidelines together so that programs throughout the state could actually meet once again and continue to teach music,” Houser said.

The feedback to the guidelines was really positive and schools over Illinois have already started to implement them, Houser said. It will still be a while before the Marching Illini can perform like in a regular season, but he believes massive leaps are already being taken to move forward with music.