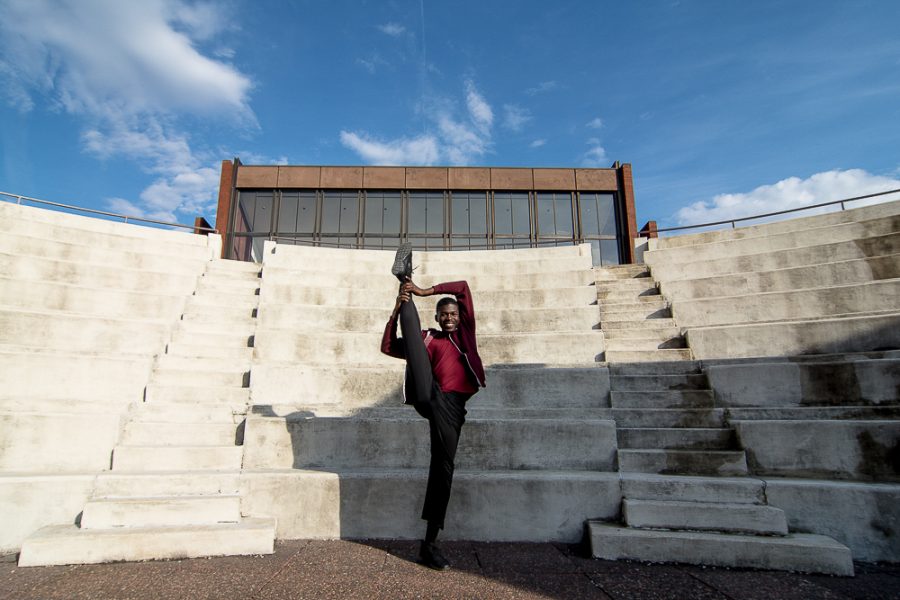 Marquise Linnear, freshman in LAS, shows off his dance abilities outside the Krannert Center for the Performing Arts. Linnear’s father was killed when Linnear was 12 years old. Since then, Linnear has used his experiences and incorporates them into dance.

When Linnear was 12 years old, his father, Anthony, was murdered at a party on the West Side of Chicago.

Anthony got into an argument with a man at the party, who pulled out a handgun and shot him in the chest and leg. He died at the scene.

At first, Marquise Linnear, the freshman in LAS couldn’t believe it. One of his relatives came to the house and explained what happened; his mother and brother then went to see Anthony. It wasn’t until his mother returned and told the rest of his siblings that Linnear realized his father had died.

Linnear had a difficult childhood — not that he will let that get to him, as he pursues his passion for math at the University and gets involved around campus.

Linnear said one of the hardest parts was seeing how it affected his family, especially his older brother Marquez.

“It really affected him the most in his childhood and his high school because he kind of had a downfall in his GPA,” Linnear said.

His father’s death, Linnear said, made him stronger and helped him come to a few realizations about his own life.

“I realized I need to do more for myself, more for my family,” Linnear said. “But I never stopped thinking about my father every day.”

Linnear was also a victim of bullying when he was younger, mostly for his sexual orientation and his love for dance. He constantly was called “gay dancer” by other students at school. He even attempted suicide several times because of the constant bullying.

“Doing any type of lyrical dances, they see that as odd to some boys,” Linnear said. “But they constantly picked me up and tore me apart for any little thing I did that was kind of odd and not normal to boys in West Side Chicago.”

Sometimes Linnear spent days at school sitting in the bathroom until a teacher came to get him. He was always very quiet and tried not to speak throughout the school day.

One day when Linnear was 14, he was jumped after a dance class.

He was on the phone when a guy came up to him and asked for the time. The boy then snatched his phone and a group of other boys started beating him. They forced him to the ground, which dislocated his shoulder, and stabbed him.

He realized two weeks later that his arm was broken from the incident. Linnear went through physical therapy because of his injuries. The incident also forced him to stop dancing for a while.

However, the bullying started to go away once he got to high school. Linnear said his friends and family are the people who really got him through those difficult years.

“Really, it was my dancing that helped me because when I dance, I just block everything out,” Linnear said. “But also I knew because my friends and everybody constantly told me, ‘It’s going to get better. People are going to talk about you regardless of what you are or what you do.’”

Linnear said his childhood only made him stronger.

“I didn’t let any barrier try to get to me,” Linnear said. “I think that’s what my father wanted me to do as well. I just kept moving forward in my life.”

Linnear is the first of his family to attend college. On campus, Linnear has been very invested in his studies and participates in Cotton Club, a group on campus that aims to showcase black talent.

He’s also working on starting his own dance club.

Linnear said he has a passion for math, an interest that started when he was in kindergarten. He eventually wants to use his knowledge in math to go into actuarial science, a field he said he can use to help people with issues like insurance.

He said he’s the type of student who likes to teach himself beforehand and is even a math tutor for a few students.

“He actually entered RHET 105 with a kind of intellectual rigor, (an) intellectual curiosity that most students frankly don’t have,” Thomas said.

Shelby Grant, freshman in DGS, is a friend of Linnear and has known him for about two years. She said he is a great role model for other people who are struggling.

“People can just take that as an example that no matter where you come from, it doesn’t determine where you will end up,” Grant said.

Linnear thinks his father would be very proud of how far he’s come over the years.

“Especially because I went to college … and (am) actually getting all these types of jobs and internships and actually being more involved within myself,” Linnear said.

When it comes to other students struggling with a difficult background, Linnear said the best thing to do is to just persevere.

“Keep on pushing, keep striving,” Linnear said. “A barrier is a barrier for a reason. There’s no such thing as a life without obstacles.”