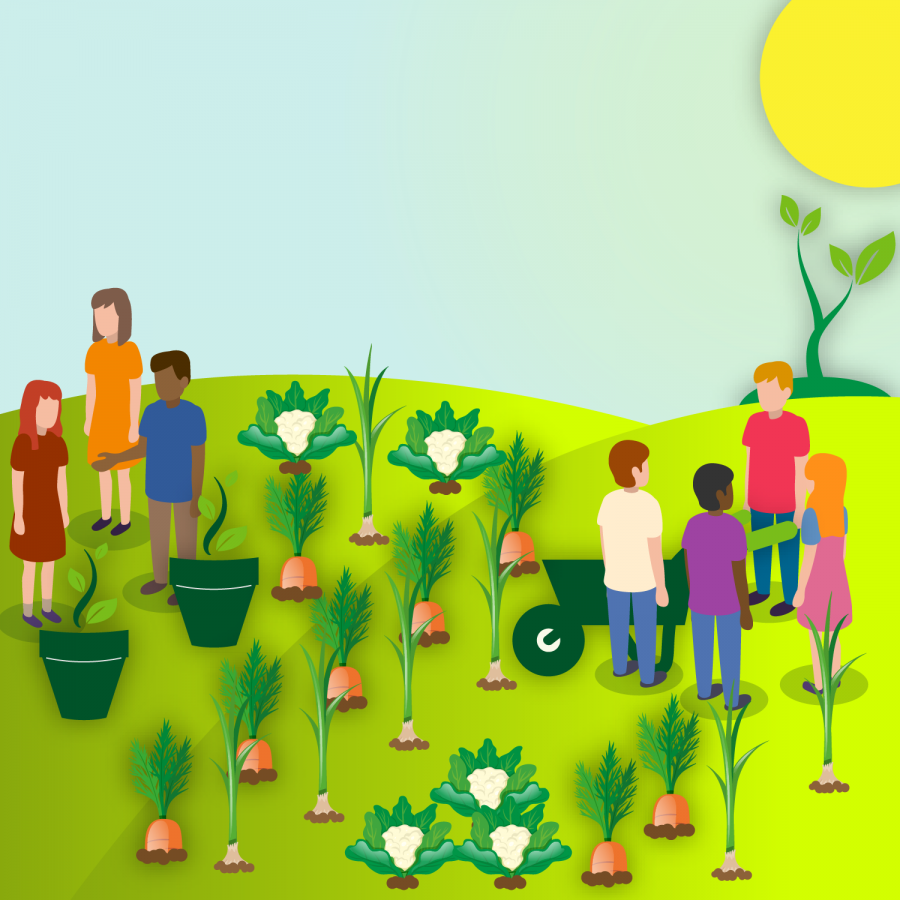 What started as an abandoned garden has transformed into an educational space and a source of food for low-income families.

Prosperity Gardens is a nonprofit organization in Champaign that provides students a chance to learn about gardening and the opportunity to grow their own produce. The organization also sells its produce at a discounted rate during the summer for low-income families.

Prosperity Gardens is just one example of a community garden in the Champaign-Urbana area.

According to 2014 data from the U.S. Department of Agriculture, there are 1,311 community gardens in the United States. 62 of these are in Illinois.

During the fall and the spring, Bridges said that Prosperity Gardens partners with the READY program in a collaboration called READY to Garden.

“The READY program is an alternative for middle and high school students who have … had multiple suspensions or been expelled from their home school,” Bridges said.

She said that during the fall and spring, she collaborates with the school’s science teacher to make sure what’s being taught in the garden works off the teacher’s curriculum. Bridges said students begin planting seeds in the classroom before they are transferred to the plot at Prosperity Gardens.

“We have peppers and tomatoes and eggplants that are started in the classroom under a light that the students are managing,” Bridges said. “Everything that is transplanted or planted is actually done by students enrolled in those various science classes at READY program.”

Josephine Tritsch, the READY program coordinator at Prosperity Gardens, said some students have a negative attitude toward gardening in the beginning of the semester, but that it sometimes changes once they start participating.

“Being in the garden in the beginning of the semester … they’re like, ‘No b—- I’m not touching that, don’t give me none of that dirt. I don’t wanna touch any of your f—ing dirt,’” Tritsch said. “After a couple months, they’re in there without gloves pulling up worms.”

Tritsch spoke about the importance of the READY program’s partnership with Prosperity Gardens. She said those students come to the garden and it gives them a purpose and something they can be good at.

During the summer, Prosperity Gardens transitions from READY to Garden to its workforce development program. This runs from May through August and gives between five to eight students from the community part-time jobs.

“We always have positions that READY students fill, but we also work with the Champaign and Urbana school districts, and we pull students from those schools as well,” Bridges said.

Bridges said that for many of these students, this is their first job and they learn many valuable skills for the future.

“In addition to the farm work, we are providing structured discipline and the importance of being on time for work and being consistent and having a positive attitude,” Bridges said. “A lot of it is also students who are really shy to talk to the public. We’re working on fine tuning … those customer service and communication skills as well.”

“We have converted a short school bus into a mobile market,” Bridges said.

During the summer, she said the students participate in two farmers markets a week with the mobile market, known to people outside the program as a food truck that sells fruits and vegetables at a low cost. On Tuesdays, they go to a farmers market in downtown Champaign and on Wednesdays they go to the Frances Nelson Health Center in Champaign.

Bridges said students set up a farm stand that they are in charge of. They then set out the produce, run the stand, talk to customers and track sales.

This program also allows Prosperity Gardens to target low-income families and give those families a chance to purchase fresh produce.

“We sell produce at a pay-what-you-can rate,” Bridges said. “(We’re) trying to increase affordability and accessibility to our low-income community through Frances Nelson.”

According to the Prosperity Gardens Facebook page, in 2016 the organization provided over 500 pounds of produce to families, five part-time jobs to students in the community and connected with over 50 families that made its produce accessible and affordable.

Prosperity Gardens has grown significantly since it began in 2010. Bridges said she started the garden with 14 raised beds. In 2013, she leased the lot across the street from the original North First Street location, where she put in 18 more raised beds.

“In 2017, we’ve also just signed a lease with the City of Champaign for an additional acre,” Bridges said. “It’s a few blocks north of where we are, which is gonna not only allow us to employ more youth (and) employ youth for a longer amount of time during the season, but it’s gonna almost triple the amount of produce we’re able to grow.”

The growth of Prosperity Gardens won’t stop with the installation of more raised beds. Bridges said they will be building structures that will allow them to have close to a 12-month growing season. Their season currently goes from mid-May to mid-September.

“We will be building something called a high tunnel,” Bridges said. “It’s kind of a cheaper (and) bigger version of a greenhouse, which will allow us to do quite a bit of season extension and what we grow.”

Bridges said that Prosperity Gardens provides kids with a safe environment which they actively want to engage in.

“I think when you’re growing anything, you affect the environment in a positive way,” Bridges said.

In eastern Urbana, the Lierman Neighborhood Community Garden focuses on different struggles than the garden in Champaign does. The Lierman garden mainly works to combat the food desert in the area.

The U.S. Department of Agriculture’s website defines food deserts as “parts of the country vapid of fresh fruit, vegetables and other healthful whole foods, usually found in impoverished areas.”

Anna Barnes, secretary of the Lierman Neighborhood Community Garden, said that the area became a food desert in August 2016 after County Market, previously located on Philo Road, closed down.

“If you plotted it out on a map … you look at the corner of Lierman and Washington and look for the nearest grocery store, (and) those are not incredibly walkable,” Barnes said. “A lot of places along that, especially if someone’s trying to go south to Meijer, there’s not even sidewalks there.”

The garden first began in 2012 because of interest from the community. Barnes said that people started gardening in their own yards, but wanted something bigger.

“The lot that it’s on was coming up for sale, and the neighbors encouraged the city to buy it,” Barnes said. “The city bought it and has been allowing the neighborhood to use it as a community garden.”

The garden started small with only a few plots made out of wooden pallets. Barnes said that pallets aren’t ideal for gardening, but at the time, it’s what they had.

“We kept them in service for five years,” Barnes said. “Some of them were clearly suffering last year.”

However, thanks to the help of a volunteer, Barnes said this year they will replace the old pallets with something more suited for gardening.

“There’s a local contractor who’s going to build us new ones and he’s going to be building them out of something super durable,” Barnes said. “It’s really exciting to see those connections being made.”

The Lierman garden does more than provide food in a food desert. It is also culturally reminiscent for international families.

Barnes said that one family who grows in the garden is originally from the Congo and planted amaranth, a flower not typically seen around Champaign-Urbana.

“One day towards the end when I was packing up tools … there was a woman who had stopped by … and she saw the amaranth and she came over to me,” Barnes said.

The woman asked Barnes to see the amaranth. She approved and the woman went by it.

“She was over there, and she literally started crying,” Barnes said. “She was from the Congo as well and she had come here. Just seeing something familiar made her really happy. It’s a little piece of home for (international families), so they don’t have to leave everything behind.”

Just like with the students who participate at Prosperity Gardens, Barnes said the Lierman garden gives community members a place to be where they feel appreciated.

“(The garden) is the one beacon of hope in the whole neighborhood,” Barnes said. “It makes those people feel like they haven’t been forgotten.”