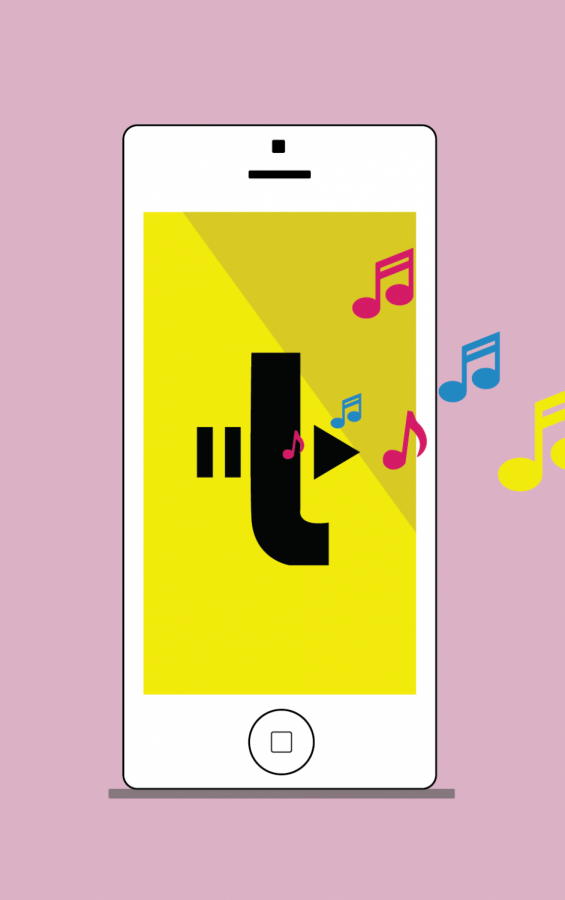 Spotify, Apple Music, SoundCloud, Pandora. While students are taking their pick amid a wave of convenient music streaming sites, users are looking for a balance between convenience and affordability.

Digital music is becoming increasingly accessible, but the top selections — unless you’re a paid subscriber — come with noisy advertisements that disrupt the flow of streaming music.

Grace Mekikian stumbled upon these issues as a freshman in high school,  which prompted her and her older sister Juliette to wonder why there wasn’t a free offline music streaming app that had all the benefits of one that requires monthly payments.

However, this sister act wasn’t just dreaming up a way for their friends to save a couple bucks. They made sure to keep the other half of the music industry in mind, striving for a solution which compensated artists and performers appropriately for their hard work.

After bringing these concerns to their entrepreneur father, Gary Mekikian, the family founded TREBEL in 2014, eventually launching the app in 2016 with Gary as CEO of the company, Juliette as user experience and user interface designer and Grace as user experience lead. The three are also co-founders of M&M Media, Inc., the maker of the TREBEL app.

TREBEL, which allows users to download music in a manner similar to Spotify, shares some similarities with other streaming services. The company claims that the app uses relatively little battery, contains unlimited storage for downloading and allows users to access other apps while playing music.

TREBEL distinguishes itself as the only free and licensed music mobile app in the world that lets users listen to offline music on demand. In other words, users can carry around their own personal music library on their mobile device and listen to songs without interruption in the order they’d like to hear them.

There is one slight catch. TREBEL relies on a system where users can earn credits by downloading music online and watching advertisements during download. Users then eat up credits by perusing through playlists of downloaded music offline.

The TREBEL team is consistently tweaking the app, releasing new versions and tailoring the user experience for their largely college-based population. Currently, the greatest growth among users is at the University.

“We’ve just introduced version 4.0 of the app, and in this new design, we’re curating playlists which are appealing to the diverse student body that you guys have,” Gary said. People from your campus who are downloading the app are finding the music that they want and love, and we’re seeing (a) significant number of students turning to the app for offline listening.”

One of these users is Dylan Wilson, freshman in FAA,  who has streamed from TREBEL for the past two years. Satisfied with the app, Wilson has found ways to ignore ads while simultaneously 40,000 credits.

“I was on vacation and I just let ads run when I was in the hotel while I was sleeping and now I have a ton of points so I don’t have to worry about ads,” he said.

While some users have learned to avoid sitting through the ads, it is necessary for artist compensation and it is the reason users can enjoy the app for free. In fact, the revenue TREBEL generates from advertisements is the principal method by which it pays its artists.

Gary is in agreement that there must be compensation for both the artist and consumer. He believes music is very valuable, particularly because artists spend a lot of money and time creating their art.

“These large partners we have don’t hand out licenses to anybody who walks through the door,” Gary said. “It requires a thoughtful plan … and making sure that all the music consumed by young people is generating revenue for the artists and also providing a good and safe place for people to get their music.”

In its quest to compete with streaming platforms and to increase its song selection and artist variety, TREBEL has already been downloaded 4 million times in the US and Mexico.

For now, Juliette and Grace are off to University of California Berkeley and University of Chicago respectively, further spreading the TREBEL mission to college campuses nationwide.

Gary said he is grateful for the partnership he has been able to establish with his daughters and the values they have so passionately instilled in him.

“It’s been the thrill of my life, doing this with my two daughters,” he said. “This product was designed by them and inspired by them. They came to me four years ago when they were still teenagers and suggested that we do this company together.”