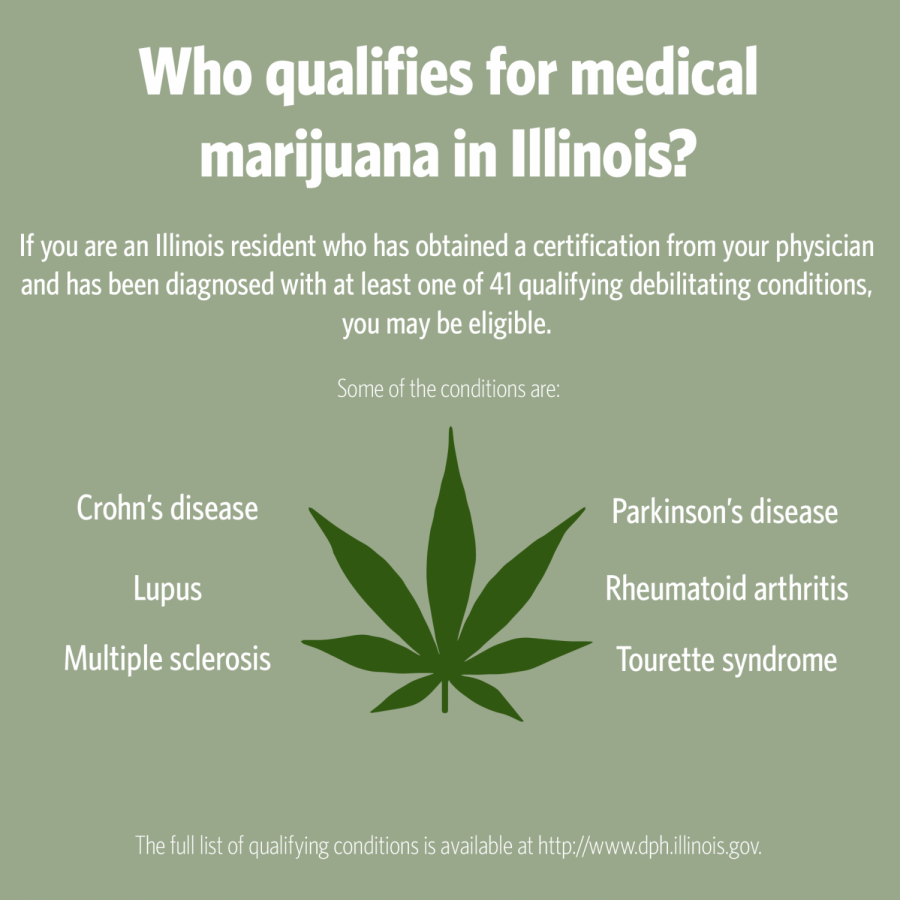 Despite medical marijuana being legal in the state of Illinois, it is still illegal to use on campus property regardless of registration.

The reason for this is the University receives funding from the federal government, and any entity that receives federal funding must abide by federal rules, said University of Illinois Police Department Communications Director Pat Wade.

“As a campus that receives federal financial aid — so primarily, like, student aid — we have to abide by the Drug Free Campus Act, which is a federal law,” Wade said. “That federal law makes marijuana — possession of, use of it, medical, whatever — it makes marijuana illegal on campus.”

While the Illinois state government allows for medical marijuana with the proper registration, the federal government prohibits all forms of cannabis.

The University also has to abide by the Smoke Free Campus Act, which states any form of smoking on campus is prohibited.

According to the University’s Campus Administrative Manual, this is to “provide a healthy environment that promotes the health, well-being and safety of students, faculty, staff and visitors at the University of Illinois at Urbana-Champaign by minimizing the negative effects of secondhand smoke, to improve fire safety and to encourage a more sustainable environment.”

Campus property is defined as “any property owned, leased, occupied, operated or otherwise controlled by the University of Illinois,” by the administrative manual.

Some places where students may run into issues with this in University Housing.

“Because University Housing is on University property, we are subject to the state’s Smoke Free Campus Act and the federal Drug-Free Schools policies,” said Mari Anne Brocker Curry, associate director of University Housing. “Marijuana use is prohibited.”

For people who are in need of medical marijuana, Brocker Curry said University Housing would then advise them to seek alternative housing options that allow marijuana storage.

Those who are found with any form of marijuana in University Housing are then referred to the Office of Student Conflict Resolution.

Jim Mosely is a budtender at NuMed dispensary in Urbana. He said medical marijuana can be used to treat a wide range of conditions, from stress to cancer.

“Cannabis has come a long way in the industry, from basically smoking it to now you can have lotions, edibles or gummy bears to help underlying conditions anywhere from PTSD to cancer to stress,” Mosely said.

Mosely tells patients that getting marijuana at a dispensary is much safer than getting it off the streets. That way, people know where they’re getting it from.

“When you’re getting (marijuana) off the streets, you don’t know what you’re getting … (At a dispensary), you know the facility it was grown at, when it packaged, when it was tested and when it got here,” he said.

It also has cameras operated by the state government watching 24/7 to make sure it’s abiding by the rules.

Wade said despite the rule, UIPD has never run into an issue with the company as far as he knows.

Although Mosely doesn’t speak for every situation, he also said if they were to run into an issue with someone possessing marijuana on campus with the correct registration, he doesn’t think they would give that person too much trouble.

“I don’t think we would give them too much of a hard time about that. I don’t think we’re going to throw the book at somebody because they’re violating the federal law,” Wade said. “So it’s kind of just a weird situation with some gray areas to it. It’s just a little bit complicated.”

Furthermore, Wade said he doesn’t think the rule causes much of a problem for students, especially those living in private housing.

Most police focus more on state laws rather than federal laws, Wade said.

“It’s just something to be aware of if you have a medicinal marijuana prescription and you’re using it; it’s something to keep in mind that the federal government of the United States has still not said that it’s legal,” he said.