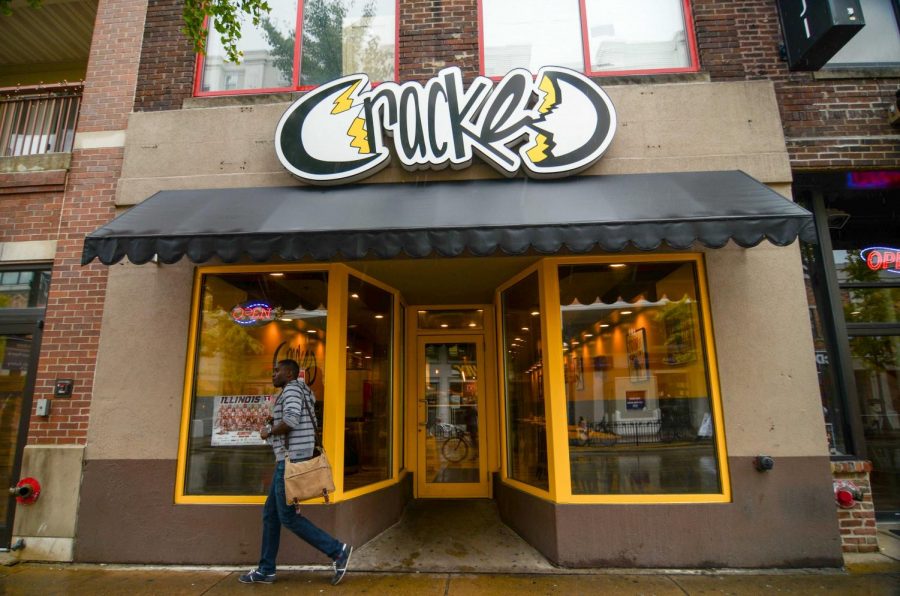 Cracked on Green is located at 619 E Green Street in Champaign.

Starting off his career in the food industry at a young age, Krause began working at a concession stand at his local pool, was a vendor in the skyboxes at Wrigley Field and earned an internship at the company Lettuce Entertain You in Chicago, where the idea for Cracked was born.

Part of the experience at the company included working in restaurants, exploring the administrative duties and creating a project with a team of four other people. The project for the summer internship involved coming up with a restaurant concept in every respect besides physically building it.

“So I came up with Cracked, and I presented it to my group — everyone really liked it, so we kind of moved forward with it,” Krause said.

The original idea for the restaurant was centered around creating omelets, but after talking with a high-ranked associate in the company, Krause decided to make breakfast sandwiches with the specialized omelet inside, for ease.

“Then, when I graduated and I wanted to do this, I thought I could just basically take that concept, which is the carry-out breakfast menu from my omelet bar, and turn that into a food truck,” Krause said. “So that’s where the concept developed and came from.”

Working with a friend of his, who majored in special education, and one of his tech-savvy fraternity brothers, they sat down together and created the Cracked logo, which consists of a split egg and the phrase “the egg came first” beneath it.

“So that was kind of one of the beauties of working on something like this while you’re in school still … you have all of the surrounding resources of the University, but also, all of your friends have talents,” Krause said.

With the food truck becoming a popular concept in 2012 in big cities on the West and East Coast, Krause transformed his idea into reality. Enlisting long-time friend Jeremy Mandell, Krause and Mandell immediately began to work on the startup — finding a truck, coming up with the menu, obtaining permits, testing the food, all while in their last semesters of their senior years at the University.

By August 2012, the first Cracked food truck was officially up and running for students to enjoy.

However, setting up a growing business on a college campus did have its setbacks for its growth. This is especially true with college students only on campus for a certain period of time.

“So, you know, Thanksgiving hits, and all of the students are gone, so the trucks don’t really make any money that week,” Krause said. “If your generator dies, you don’t have electricity, you don’t have a truck, you can’t make money. If your breaks go down, if your engine in your truck goes down, if you don’t have enough hot water or something, you can’t take the truck out that day, and you take it to get (fixed), and you’re losing sales.”

Creating and sustaining a steady cash flow became a major concern for the owners due to the seasonality of the food truck industry, the amount of problems they faced being dependent on the functionality of trucks.

Expanding the business also became a problem because of the lack of need for multiple food trucks on campus.

These struggles all led Krause to the ultimate solution — to create a restaurant. By establishing a physical restaurant, the business would gain a consistent and sustainable environment to grow the business while still sharing their food with customers.

Due to all the factors and concerns, the trucks caused the business, creating the restaurant was easy in comparison.

“I can just come in every day, unlock the doors and flip the lights on, and all the outlets work every day… it’s just in every way, it was easier,” Krause said.

Even finding the right location for the restaurant turned out to work in Krause’s favor.

The building used to house a late-night pizzeria called Antonio’s where the guys used to eat at themselves. But when they found out the owner was trying to sell after a month into searching for places, they jumped at the opportunity.

Lewis Nisbet, manager at Cracked, boasts of the fun-loving, inviting work environment that matches the experience they give to their customers. Beginning his career with Cracked two years ago as a manager in one of the food trucks, Nisbet now works six days a week as the manager of the restaurant.

“I think the fact that I ended up working here is because of a really friendly environment to work in and with the employees,” Nisbet said. “I thought, the way he built Cracked, for it to be a really cool environment for students to come relax and chill. He leads the company with the same attitude.”

Not only does the entrepreneur handle the many challenges of his evolving business that have been thrown his way, but he succeeds to please his customers and employees in the process.

As the business continues to grow in Champaign, the employees continue to back the company and are happy to see its success as well.

“The people that have been here awhile that speak highly of the management and the company, they are treated well enough to want to stick around. It’s a sort of testament to Daniel’s leadership,” Nisbet said.

The company continues to grow to this day, turning a profit and hoping even to expand into Chicago by the end of the year. As the first year the company has turned a successful net profit, Krause becomes more excited for what the future holds for the Cracked franchise.

“When you feed someone something awesome, new, whatever it may be, and you see a smile on their face like, ‘Oh my God, this is awesome,’ that fills me with joy, and that’s what really keeps me going,” Krause said.