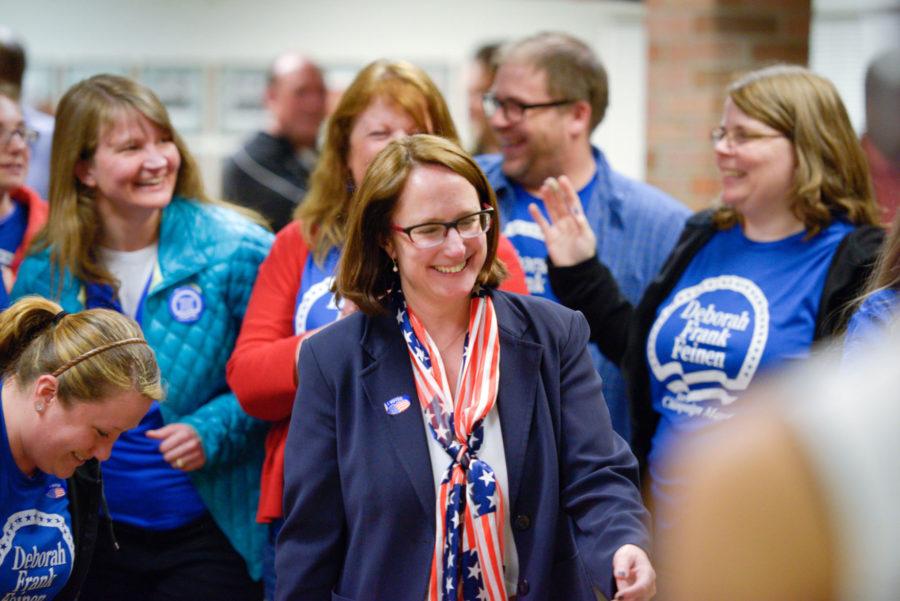 Deborah Frank Feinen smiles as she walks into the room to be greeted by her supporters and interviewed by the media at the Brookens Center on Tuesday.

After winning the mayoral elections with 41 percent of the votes, Feinen was sworn in last week.

Just over than a month after Deborah Feinen won the Champaign mayoral election with 41 percent of the vote, she was sworn into office as the official mayor of the city of Champaign on May 5. She is the second woman to serve as mayor for the city.

Before her mayoral campaign and election, Feinen served as an at-large Champaign City Council member and as commissioner and chair of the Regional Planning Commission. She is also a partner and practicing attorney at Tummelson, Bryan & Knox LLP. LB

While serving as mayor, Feinen said she plans to focus on decreasing gun violence by working with the police department. She said she also wants to push for more economic development of the city’s broadband infrastructure.

In a previous interview with The Daily Illini, Feinen said there needs to be communication among the citizens and the police department to decrease gun violence.

“We have to work with our chief of police and the officers — I think they are beginning to have some community conversations,” Feinen said. “Those conversations are starting to happen, and I think in the next few months we’ll be having a study session with the chief to talk about it.”

Since, the Champaign Police Department has invited community members to discussion forums and considered the possibility of police officers wearing body cameras.

Feinen also previously told The Daily Illini that one of her main focuses will be on how the city’s broadband will promote economic development.

“We have some of the fastest Internet available to us in the country,” Feinen said. “Now that we have the infrastructure in place, we need to really develop it for economic development, get new businesses here and really use it for education.”

At-large Champaign city council alderman Tom Bruno, who served with Feinen on the city council, said he remained neutral throughout the campaign, but is eager to see what Feinen will bring to the city as mayor.

Bruno said he and Feinen will be visiting Washington Monday to lobby the U.S. Congressional delegation and advocate for transportation funding, high speed-rail and support for Amtrak with Sen. Dick Durbin and Sen. Mark Kirk.

“Deb has always been a strong advocate for personal freedom, social justice, LGBT issues, environmental issues, she’s a fiscal conservative; she and I may differ a little bit on that,” Bruno said. “But she’s a principled person and open-minded and she works hard and that’s all we can ever ask of our fellow council members.”