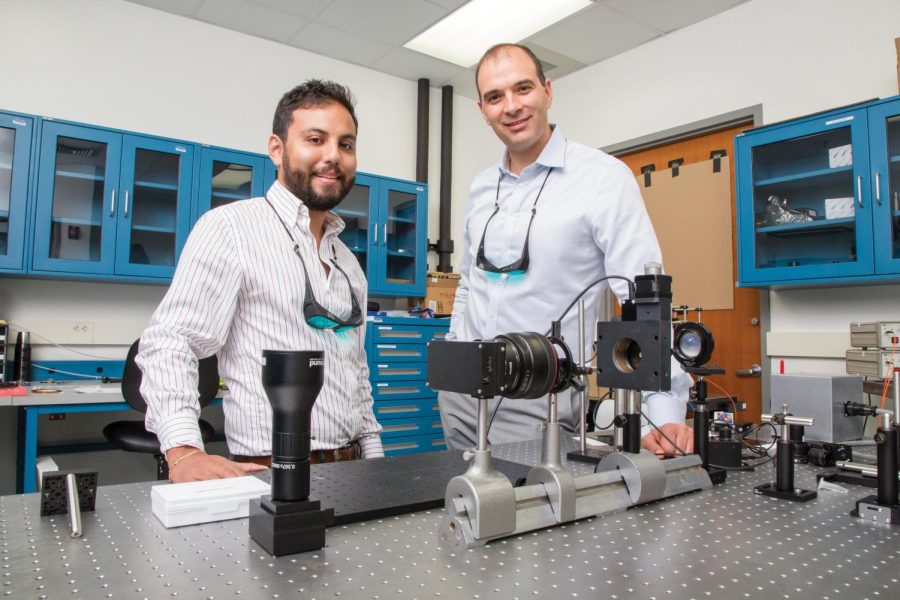 With a new look through the eyes of the mantis shrimp, the world is able to make greater discoveries in marine biology and cancer detection research.

A University professor and graduate student created a new camera, inspired by the eyes of the mantis shrimp, that can detect both light and polarization.

Dr. Viktor Gruev, associate professor in Engineering, said he was inspired to create this camera on a trip with marine biologists to the Great Barrier Reef, where he first saw the mantis shrimp.

“I was kind of fascinated by the visual system the marine biologist was working with,” Gruev said. “They had been studying the mantis shrimp eyes for 20 years.”

While the average human eye has three different color receptors, the mantis shrimp has 16 receptors.

According to Gruev, the shrimp can potentially see a lot more colors than we can and possibly sees a lot more hues of red that we cannot differentiate.

“They can capture so much more color information than us,” Gruev said. “They also have kind of like polarization sunglasses.”

Humans’ eyes cannot detect polarization, but some animals have this ability, which provides more information on the image being viewed.

If a creature can see polarization, it can see different types of patterns or hues that the human eye cannot detect. It’s like a secret channel of communication, Gruey said.

By using this combination of polarization and colors, the researchers say this camera should help doctors detect cancer at an earlier stage.

“There are some subtle properties of polarization that are different if the tissue is healthy versus cancerous,” Gruev said. “We can use polarization technology for cancer detection.”

The colors show anatomical features, and the polarization shows where the suspicious tissue is located that could be cancerous.

Missael Garcia, Ph.D. student in Engineering, said he expects this camera to make large strides in the field of early cancer detection research as well as underwater studies.

“We have universities around the world who want to use the camera, especially in marine biology,” Garcia said.

Both researchers stressed that because of the camera’s size, more marine biologists can easily use it underwater.

Garcia said that for the picture community as a whole, this new development is the first to combine many useful features.

“It is the only camera that combines all the properties — brightness, color, polarization,” Garcia said.

Steven Blair, Ph.D. student in Engineering, works in the research laboratory with both Gruev and Garcia on a regular basis.

Blair explained the lab is focused on developing special types of images that give more information than one can get with a normal camera.

“So if you take a picture with your cell phone, for example, you get the same red light, green light, blue light that’s present,” Blair said. “But we want to go beyond that.”

The researchers said the mantis shrimp-inspired camera has been in development for about five years, and the official papers were published last week.

“It’s a really powerful thing because the more information that you have about light, the better decisions you can make about the things that you’re looking at,” Blair said.