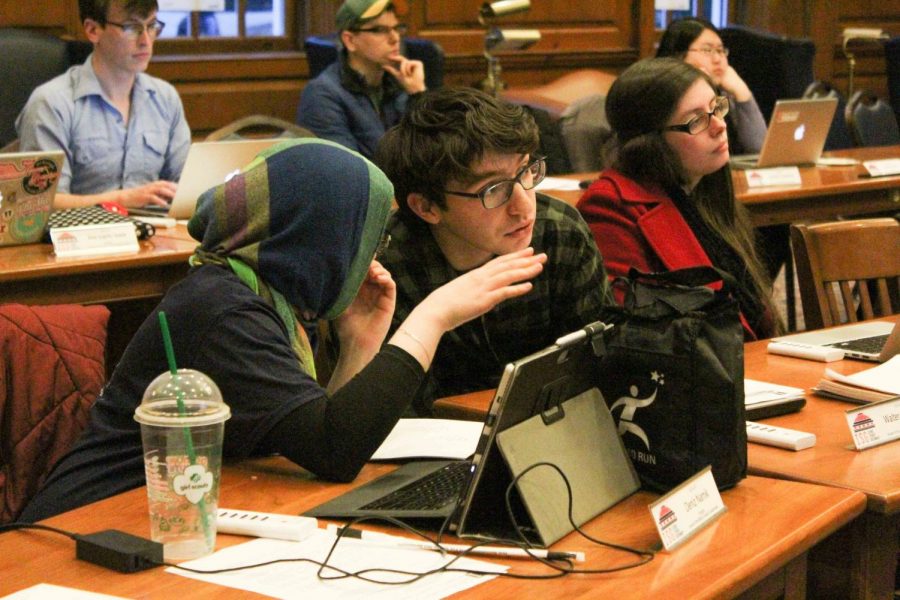 Members of the Illinois Student Government talk at a meeting. The ISG voted to impeach Chair of Diversity and Inclusion Andrew Minik due to misconduct and neglect of duties, causing some negative backlash from University students.

The Illinois Student Government voted to impeach Andrew Minik, senior in Business, citing his neglect for his position and his misconduct while serving as chair of diversity and inclusion.

Walter Lindwall, junior in LAS and student body president, said the incident that brought him over the tipping point to file impeachment charges was an email Minik shared with members of Turning Point USA, an organization in which Minik holds the position of the president.

The email, sent privately to Minik by an undocumented student calling for the cancellation of the “Build the Wall” event organized by Turning Point USA, was shared with members of the organization, eventually leading to the email being posted on social media, Lindwall said.

Turning Point USA organized the “Build the Wall” event to memorialize victims of crimes committed by undocumented Americans. Minik said the impeachment charges were a direct attack on his political beliefs and caused by personal issues other senators had with him.

“The purpose of the event was to bring awareness to victims of violent crimes that are often overlooked due to a broken system. We weren’t proposing any alternatives, rather bringing awareness,” Minik said.

Lindwall said the ISG is not allowed to suppress the work or political opinions of someone while they are outside of the student government, but it is a problem when work in the ISG combines with work in other organizations.

He said that happened when Minik sent the email he received as the chair of diversity and inclusion to the other members of Turning Point USA.

“He used his role to basically incite harassment against another student,” Lindwall said. “If he had just stuck to a strict division between Turning Point and the student government and not basically encounter issues of diversity and inclusion between them, (then) we probably wouldn’t have brought forth (the impeachment charges).”

The Committee of Diversity and Inclusion was only able to meet five out of eleven times and Minik was only able to attend a few meetings. Lindwall said Minik also sent in agendas and reminders just minutes before the meeting was meant to start.

The Committee was never late putting forward work, Minik said. He said he was being held to a higher standard than were the other committee chairs.

ISG had asked other committee chairs to resign over the course of the year, due to their neglect of the position, but Minik wouldn’t resign when he was asked to do so, Lindwall said.

“We definitely tolerate all sorts of view points, it is when things like discrimination and racism come in that we want to draw a firm line,” Lindwall said.

Jack Johnson, sophomore in Engineering and a senator in ISG, said in an email it was not fair to impeach Minik, since most of the articles of impeachment focused on his activities outside of the student government.

“This behavior is exhibited by all other ISG chairs minus one or two yet not one has even been reminded or set straight by exec, let alone impeached,” Johnson said. “Clearly a witch hunt that started the night he was elected over their hand-picked successor.”