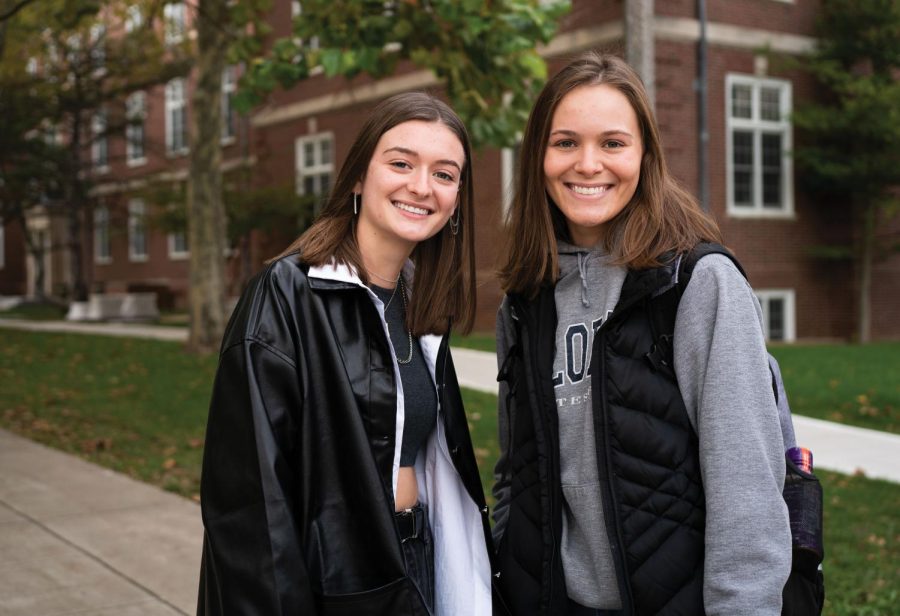 Helene Simmons (left), freshman in ACES, and Hayden Fischer, freshman in LAS, discuss their thoughts on the correlation between Greek Life and sexual assault.

A 2019 report prepared for the Vice Chancellor for Student Affairs concluded that joining a sorority is correlated with an 80% increase in sexual assault amongst its members compared to the general student population.

A staggering statistic, the following statements correspond with the students’ sentiments on whether this is true in their experiences. What do Illini think of Greek life leading to these percentages and should the University or Greek life take responsibility in changing this rate?

“Well, personally, I’ve heard of a lot of cases where that is actually true, so I feel like they definitely have to do something about it. I feel like people do report (sexual assault), but nothing really happens, so that’s a big problem. Personally, that’s also one of the reasons I didn’t join. Because I feel like you are more susceptible to that kind of danger. I mean, anywhere in college to be honest. But I feel, especially in frat houses, everything is swept under the rug, and it’s kind of scary.

“When I heard about the kids who were hazing, they publicized it. They made it known — this fraternity or this sorority, they were caught doing this. They should be doing the same thing when it comes to sexual assault, like make people aware: This is what this shady *** fraternity is doing.”

“I think it is definitely correlated with that increase. I think it is a lack of awareness that certain Greek life supports and enhances that (sexual assault) in happening, and I think more people think that Greek life should take more accountability of certain practices like hazing and bullying.

“I’m a two-year transfer. I’m a veteran, so I never had to experience that stuff. But a lot of things we experience in university stems out of military structure. Our campus is very much structured like a military base. The chain of command and leadership is very much like the military. So I see a lot of similarities that have stemmed down into Greek life. There needs to be more accountability for students who hold those positions, and I think that will help this stuff doesn’t happen.”

“I think that’s a fair study. I mean, stereotypically, fraternities and sororities are associated with more sexual activity. But being in a fraternity or sorority is not an excuse to assault anyone or be assaulted, but I think the University should address it because it’s such a huge topic and our Greek life system is so big.”

“We had the required FYCARE, and there was no mention of sorority or fraternities. I think there should be. If girls are rushing and guys are joining fraternities, they should know that and be more educated on that as well.”

“I mean obviously I think that’s really terrible. I think it’s a holdover from old school stuff like ‘Animal House’ that really makes people have an even worse image of Greek life. Obviously, if these statistics are out there, there is a really negative trend. I think the University should (take action). I don’t know what actions they can really take. I know FYCARE and stuff like that are really solid foundations for training these people — semester workshops, etc.”

“I think it just feeds into itself. As it happens, it gets worse. I think (with) FYCARE … they are at least trending in the right direction. It’s not a solution by any means, but at least it’s showing the students, the faculty and the staff here that the University is conscious about it and trying to make an effort.”

If you require reporting an incident of sexual misconduct or assault, various resources can be found with the McKinley Health Center, Counseling Center and/or Champaign-Urbana police departments. Do your part in preventing incidents by remaining vigilant and completing University training, supporting victims and knowing your rights when reporting.

Talia is a freshman in Media.