Observing the siege of the Capitol Building up close 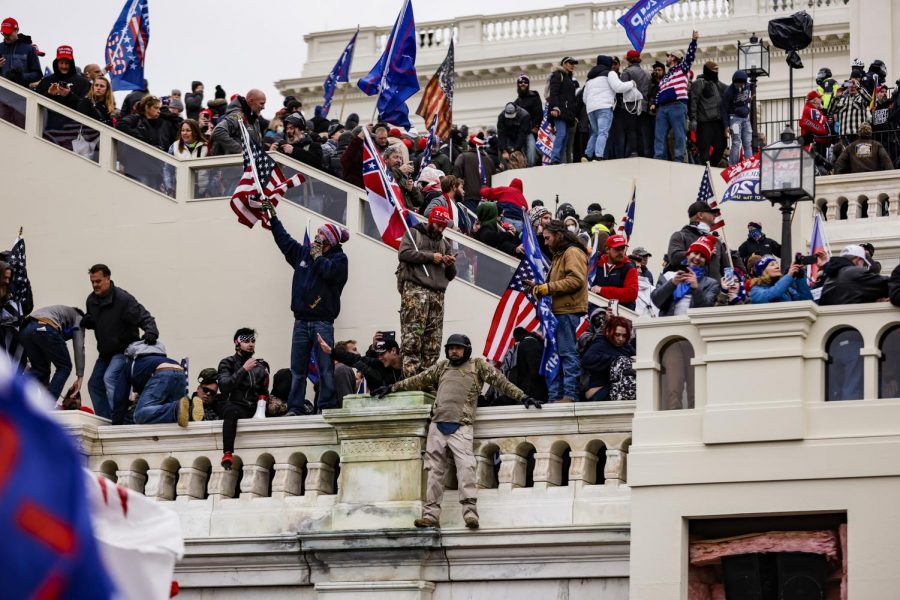 As I spent time on the National Mall and around the fringes of the Capitol Grounds after the invasion of the Capitol Building by extremists Wednesday afternoon, I was repeatedly surprised by the relationship between the two types of demonstrators participating in the day’s events. By the time I arrived in D.C., sometime around 4 p.m. Eastern Standard Time, nearly two hours had passed since pro-Trump extremists breached the barriers erected by Capitol Police and made their way inside the building, an act that had separated the protestors into two distinct groups: the extremists who participated in the siege, and the relatively peaceful protesters who did not.

However, despite the vast difference in methodology between the two groups, one common quality remained: the conviction with which they believed in President Trump’s rhetoric.

Due to the distance, I tried to keep between myself and the unrest unfolding at the Capitol, I positioned myself on the other side of the Capitol’s Reflecting Pool, and interviewed protestors as they departed and headed back onto the streets of the city. With a strange uniformity, everyone I had a chance to interview had nearly identical answers as to why they decided to descend upon the Capitol Building that afternoon: They believed the election was fraudulent and felt it was necessary to voice their outrage over Congress’ perceived betrayal of the American people by certifying the election’s results (It is worth noting that there is no evidence to support recent claims of voter fraud, and the Trump Campaign’s legal team has lost 61 of the 62 lawsuits it has filed to challenge the results).

Though there was some variation in opinion as to whether or not the storming of the building was appropriate, many of the protestors I spoke with seemed largely unconcerned about the long-term ramifications or potential consequences of the day’s events: when I asked for their thoughts on the siege, one man plainly declared “Well, we’re past the point of peaceful options.” Later, one woman expressed a distaste for the violence, but displayed a sort of resigned acceptance, simply saying “It is what it is.”

Later in the day, as the sun began to set, and the beginning of the 6 p.m. curfew loomed, police activity increased dramatically. Riot police began to retake the front steps of the Capitol, and began to push the mass of protestors back out into the yard, where another line of police, bearing shields and nightsticks, created a unified line across the lawn to prevent any sort of counter-push by protestors.

Throughout the process, a series of dull thuds and bangs could be heard resounding from the steps, accompanied by bright flashes. Speculation quickly started amongst those of us standing on the other side of the reflecting pool, with the most common theories asserting that it was gunfire or protestors lighting fireworks off on the steps of the building. Venturing slightly closer to the clash, I was able to confirm, through protestors fleeing the scene, that the explosions were actually caused by the detonation of tear gas canisters, as part of an effort by police to disperse the crowd before moving forward to clear the steps and lawn.

The protestors’ presence was felt all across the mall, even in areas where foot traffic was low and congregations of protestors were small. Street vendors popped up all alongside streets winding around the Mall, hawking a wide selection of Trump memorabilia to any who passed by. Families and groups of friends bearing flags emblazoned with “Trump 2020” marched around the Malls’ perimeter and walkways. Most notably, pro-Trump signs and banners were strung up on street signs and lamp posts, culminating in the construction of a mock gallows, complete with a noose made from fluorescent orange nylon rope and signs reading “Stand with Trump” affixed to the sides. The crowd’s command of the mall was undeniable, and at every turn there was someone or something reminding you exactly why they were there, and who exactly they were fighting to support.

A few closing thoughts: Wednesday’s events will go down in history and for good reason. On Wednesday, we watched, in real time, something that has not happened in this country since 1814. It was also an unprecedented attack on the institutions we typically take for granted, and arguably the logical endpoint for certain political sentiments that have been building within the public consciousness for many years. It is also impossible to say whether or not something like this will happen again in the coming days. However, at the risk of sounding sappy, in the hours that have passed since I left D.C. Wednesday night, I’ve been unable to stop thinking over a particular quote from Bill Clinton, that reads: “There is nothing wrong with America that cannot be cured by what is right with America.” We have done something horribly wrong, so all we can do now, as a people, is embody what it is that we do right.