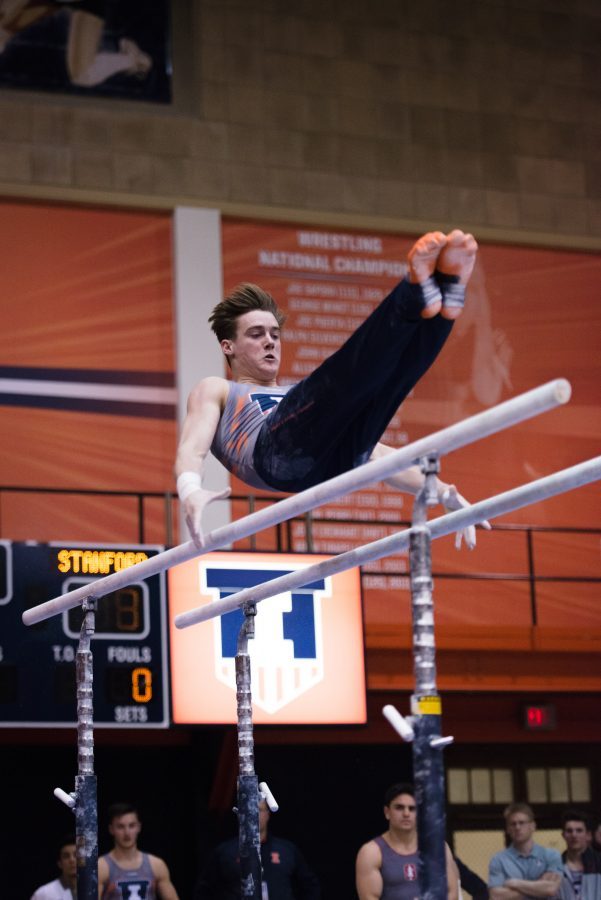 Illinois’ Tyson Bull performs a routine on the parallel bars during the meet against Stanford at Huff Hall on Friday, March 6, 2017.

Former Illinois gymnast Tyson Bull cemented a spot in the 2020 Tokyo Olympic Games with a score of 14.366 in the high bar at the 2019 World Gymnastics Championships men’s finals qualifiers, which resulted in a seventh-place finish.

Only the top eight finishers in the high bar are guaranteed a spot in the 2020 Olympic games.

“In the most important moment of his career, he had 35 seconds to perform one of the hardest high bar routines in the world,” said associate head coach Daniel Ribeiro, per fightingillini.com. “This was one chance to make the Olympic Games. After all the ups and downs over the years, in the biggest moment on the biggest stage he rocked his routine, stuck his dismount and will be our most recent Illini Olympian.”

Bull is the first Illini men’s gymnast to make the Olympics since head coach Justin Spring qualified for the 2008 Beijing Olympics, where Spring and Team U.S.A. went home with a bronze medal.

Representing his home country of Australia, Bull will now compete at the World Championships Finals on the apparatus for the first time in his career, which kicks off on Friday in Stuttgart, Germany.

“Tyson has always set his goals at the very top,” Ribeiro said. “There (have) been so many times in his career where he has fallen just short. He would be left with that feeling of ‘What if I did this differently’ or, ‘If I only stuck my dismount’. He was very hard on himself. I would tell him that God throws him these obstacles and challenges because he knows that Tyson can handle them and learn and grow from them. I told him there would be a time that all the pain and heartache from failure would pay off, if he could just get back up on his feet from getting knocked down and fight some more,” Ribeiro said.

“There is not a more deserving person,” Ribeiro said. “Once the final scores came in our entire team was screaming and I couldn’t help but cry. He has put in so much blood, sweat, and tears and his dreams came true. This is why we coach, to help our boys reach their dreams and have the privilege to share in a part of their journey.”