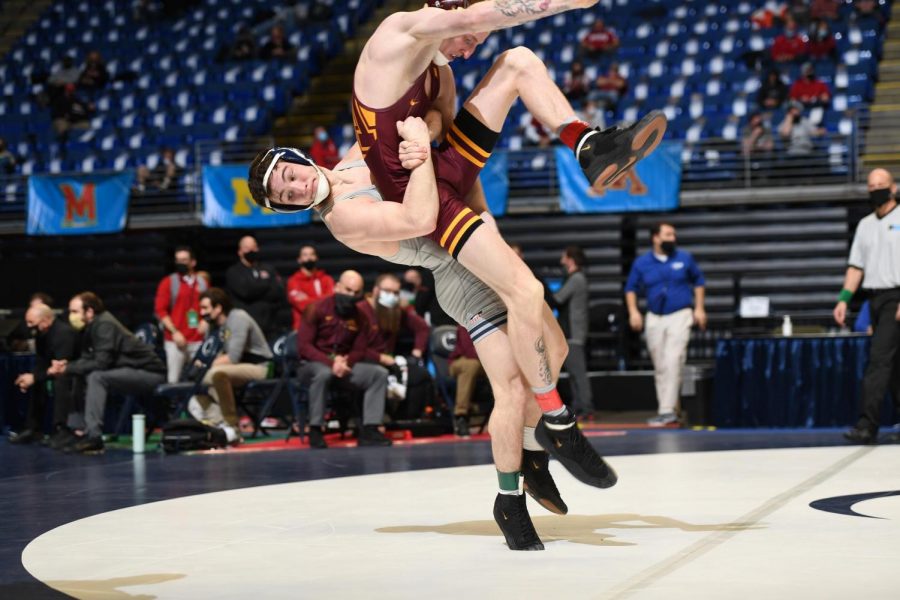 Lucas Byrd throws his opponent to the ground during competition. Byrd recently placed fifth at the NCAA Championships.

All athletes have something that motivates them to continue striving for greatness. What motivates you?
Redshirt freshman Lucas Byrd is motivated to wrestle because every man in his family is a wrestler, which is what made him start wrestling at the age of eight. Competing for an NCAA championship was not the beginning of his career, as wrestling has been a part of his whole life.
“Everyone in my family are wrestlers, besides my mom, but everyone is an athlete in some way,” Byrd said. “I know I am the youngest, so it was only right for me to continue the legacy of wrestling. Plus, I’m the best out of my family, too, so why not?”
Byrd started wrestling at a young age after watching his brothers and father compete at a high level, which made his love for the sport even more surreal. As a sophomore in high school, Byrd competed in the 106-pound weight class, finishing the season with a 50-2 record.
With wrestling deep-rooted in his family, an outstanding championship performance was expected of him from an early age. Coached by his brother, Max Byrd, Byrd’s second state championship against Ohio State’s Jake Canitano made their bond even stronger.
“My dad and my brother really made me want to enjoy wrestling while giving it my all, which is why I wrestle with some much intensity and confidence,” Byrd said. “I am trying to compete on every level, which means I do not plan on stopping after we win the NCAA Championships. My main goal in my wrestling career is to win as any championships as I can, but being called an NCAA All-American does have a nice ring to it.”
Of all five wrestlers from Illinois who qualified, only two were selected to receive All-American honors. Byrd received All-American honors after beating Pittsburgh’s Micky Phillippi, while teammate Dylan Duncan was also recognized.
Byrd represented the United States in Athens, Greece, as a junior in high school at the Cadet Greco World Wrestling Competition. The level of competition at the NCAA Championships was no surprise to Byrd, but the way he competed opened everyone’s eyes.
The NCAA wrestling championship was canceled last season due to COVID-19, so Byrd was not able to watch any of the seven qualifiers from Illinois compete, leaving unanswered questions about what to expect at an event like this. With this only being his second season as a member of the Illini, he had little time to prepare for the tournament.
“It felt like any other tournament, just focusing on what we worked on all season and then executing it out there on the mat,” Byrd said. “I was not nervous, but I had moments where I felt some stiffness in my body. I really focus on what I can do better each tournament to elevate my game. Watching my teammates give it their all inspired me to do the same because we all are working toward one goal.”
Byrd secured fifth place in the 133-pound weight class at the NCAA Championships after he pinned Arizona State’s Michael McGee in the third period, maintaining a 6-2 record in his previous matches.
“The NCAA championship has been around in all sports, which means we still have time to get that first-place trophy, and I’m ready for it,” Byrd said. “I know we have other tournaments and championships that we should take seriously, … but the NCAA championship is the goal I have set for myself to complete.”
The NCAA Championships will come around again, meaning sophomore Byrd, along with the Illini, will have another shot at taking home that first place championship trophy.
“I know it’s more to life than winning,” Byrd said, “but who wouldn’t want to win every time while doing what they love to do?”