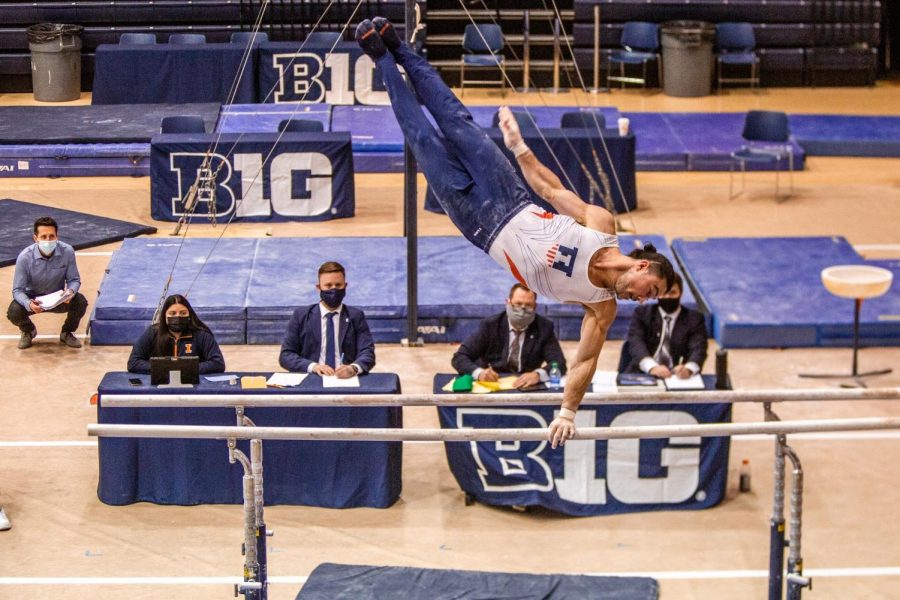 Junior Clay Stephens poses on the parallel bars during their meet on Jan. 23. The men’s team continues to practice and work on their skills before the NCAA Men’s Gymnastic tournament.

The junior all-arounder came close as a freshman in 2019, placing third in the all-around with a score of 82.700. His vault score of 14.650 in the team finals that year is still a career-high.

Fletcher put up a near-identical vault score of 14.600 on Saturday at the Big Ten Championships in Lincoln, Nebraska. He edged out Nebraska’s Taylor Christopulos by five-hundredths of a point, the closest margin possible in gymnastics, to claim not only his first-ever Big Ten championship, but his first-ever vault title.

“It feels really great,” Fletcher said. “When someone says that to me (‘Big Ten champion’), it gives me goosebumps. I came back from my knee injury, was dealing with some issues on vault and I’m really proud of myself for overcoming them and having a great vault.”

Fletcher hasn’t been the strongest competitor on vault this season, so the title came as somewhat of a surprise for him. But what it really came down to was which gymnast did their vault routine better during the meet.

“The funny thing about vault is most people that are really competivine in this event are doing the same level of vault,” Fletcher said. “I don’t think there was an expectation for anyone to win. Anything can happen on vault on any given day, just because everyone’s at the same level.”

Fletcher was one of the only gymnasts to stick his vault landing, something that neither he nor his teammates expected to happen. That, according to Fletcher, was the five-hundredths difference between champion and runner-up.

Three other Illini also placed in the top fives of events. Junior Ian Skirkey scored a 14.300 on pommel horse, just five-hundredths less than Michigan’s Cameron Bock, to claim runner-up honors, while sophomore Connor McCool tied for second on floor exercise with a 14.600. Sophomore Evan Manivong placed fifth on vault with a score of 14.450.

Fletcher’s championship earned him a place on the All-Big Ten First Team, while Skirkey and McCool were named to the All-Big Ten Second Team. Manivong was also named the recipient of the Big Ten Sportsmanship Award.

“Michigan was just leaps and bounds above the rest,” Fletcher said. “They’re a very high-caliber team this year, and they showed it. Beside Michigan, everyone is on a pretty level playing field right now.”

It was expected to be an uphill battle for the Illini going into the Championships, with six of its best and highest-scoring gymnasts unable to compete. Despite the challenge, the Illini put up a season-high 70.650 on floor, tied for the highest team vault score with a 71.200 and outscored every other team on pommel horse with a 66.100.

Though it was not the highest pommel horse score of the season for the Illini, Fletcher and head coach Justin Spring called the team’s pommel horse performance the best of the season, with five hits and zero falls.

Despite a season-worst parallel bars performance, which lowered Illinois’ score by nearly four points and its meet placement by as many as two positions, Fletcher was proud of the team for rebounding the way they did after the disastrous rotation. He and the rest of the team were also just happy to do as well as they did given the circumstances and to have fun doing it.

“Having so many of our top routines out, I don’t think there were a lot of expectations going into this meet,” Fletcher said. “We just wanted to go out there, do the best we could and have fun. P-bars was really disappointing, but floor was super fun, vault was fun and horse was electric for us. It was really fun being there, even though we had some rough points.”

The Illini have a two-week break in competition before they wrap up the season with the NCAA men’s gymnastics championships in Minneapolis on April 16-17.