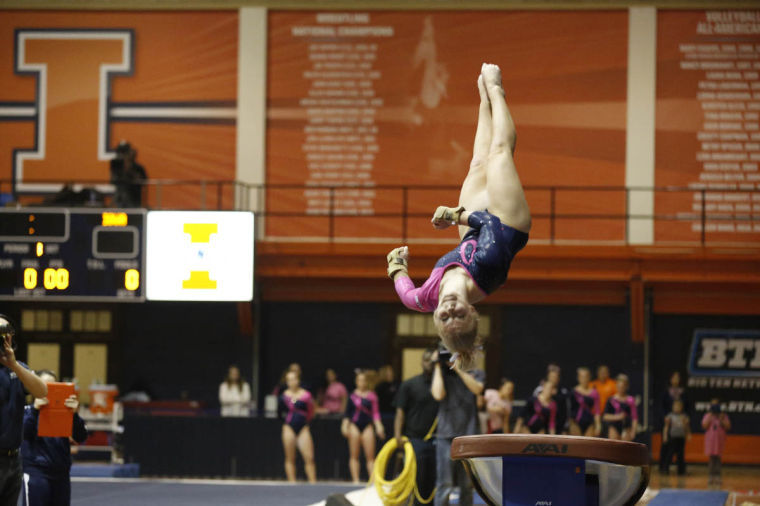 Illinois’ Erin Buchanan competes her vault pass during a dual meet against Iowa at Huff Hall on Friday, Jan. 31, 2014. Buchanan placed first with a score of 9.875.

It had been three days since freshman Erin Buchanan received the opportunity to spend time with her idol, but the excitement still lingered in her voice. Not even a tough loss to rival Michigan could alter her tone.

Tuesday, Buchanan was one of four Illinois women’s gymnasts who had the opportunity to have dinner with Olympic gymnast Shawn Johnson. “I’ve always looked up to her, and people used to tell me all the time that I looked like her when I was younger,” Buchanan said. “So it was exciting to finally talk to her on a more personal basis because I’ve met her in gyms and everything like that.”

The process of getting to attend the dinner, though, took extra effort. When head coach Kim Landrus initially asked her team who would like to attend a dinner with Johnson, about half of the team volunteered. To narrow it down, Landrus thought to pick names out of a hat, but she changed her mind. An email was later sent out to all of the gymnasts asking who really wanted to go. Buchanan, fellow freshman Mary Jane Horth, junior Jordan Naleway and sophomore Giana O’Connor were the ones who responded, giving them a once-in-a-lifetime opportunity.

“It was weird at first for us because we were like, ‘There’s an Olympian sitting at the same table as us,’” Horth said. “But she was totally a regular person, really down-to-earth, and she just made us feel really comfortable. And the conversation was normal, but we were just so in awe of her because she’s such an amazing person.”

Although conversation seemed regular, no one could forget Johnson’s achievements. After all, it’s why the gymnasts wanted to partake in the dinner, so hearing stories about the Olympics, “Dancing with the Stars” and things of that nature highlighted the event.

“It was so fun listening to all the things she got to do,” O’Connor said. “You got to watch it all on TV, and then you got to hear her side. So it was like behind-the-scenes information that you never knew about.”

There was more to the stories than fun moments and unforgettable memories, though. Johnson had plenty of lessons to give the gymnasts, but there was one in particular that really stood out.

This message was just one of many that opened Naleway’s eyes, but it is the one she will take the most out of. It offered her a new perspective of approaching gymnastics.