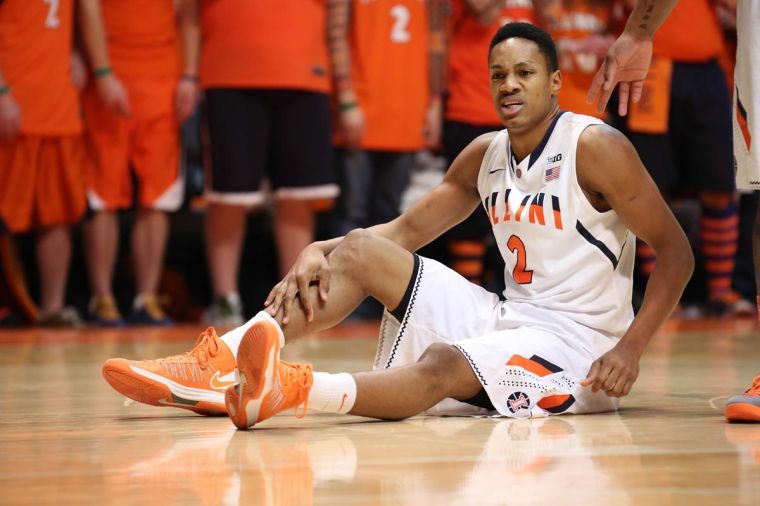 Illinois' Joseph Bertrand (2) holds an injured leg during the game against No. 12 Michigan, at State Farm Center, on Tuesday, March 4. The Illini lost 84-53.

Hours earlier he had walked across the same court with his mom and his brother at his side. Tuesday night was senior night at State Farm Center for the fifth-year veteran. The cheer from the orange-clad fans when his name was announced was one of the loudest all night.

Bertrand embraced head coach John Groce — sporting his orange blazer — at center court. He was handed a plaque bearing a white No. 2 jersey and took a photo with Athletic Director Mike Thomas.

Fellow senior Jon Ekey followed shortly after with members of his family. It was the same routine, a plaque with his No. 33 jersey, a photo with Thomas.

It was not the seniors’ last game for Illinois. But it was their last in Champaign.

The ceremony ended. The game started.

The seniors were forgotten as freshman Kendrick Nunn drained seven points in the game’s opening minutes.

Groce called Bertrand and Ekey’s numbers at the 16:13 mark in the half. They stood from their spots on the bench and went to the scorer’s table. They crouched down together, waiting for a whistle. They waited two minutes for a stoppage of play to occur, allowing them to enter the game. The seniors walked onto the court with 13:50 remaining in the half, Illinois trailing Michigan 17-11.

Bertrand’s night would not last long.

He got up and down the court a few times. With 11:46 on the clock, he went down hard under the Wolverine basket, clutching at his right knee and grimacing noticeably.

Bertrand stood and made his way to the Illini bench. He walked gingerly, but not so much so that one would think he wouldn’t return.

But his No. 2 jersey never came out from underneath his warm ups in the second half.

After the game, Groce was uncertain about Bertrand’s status moving forward. Illinois’ athletic trainer Paul Schmidt took a look at Bertrand’s knee at the time of the injury and didn’t think it was too serious. But X-rays will be needed and further opinions gathered.

Fans might remember Bertrand hurting his knee. Or they might remember Ekey missing a dunk. But they will definitely remember the blur that was Michigan’s Nik Stauskas as he drained eight 3-point shots and scored 24 points in Michigan’s 84-53 win.

Ekey did score four points in his 21 minutes, and Bertrand managed to put in a bucket before the injury. For both of them, the last farewell was disappointing.

The outright Big Ten champions scorched the nets from inside, outside and everywhere in between. The Wolverines played like the team that shot Louisville out of the gym in the first half of last year’s national championship game. Only this time they didn’t let up.

It was their night. They played like the champions they are.

“We’ve had some really good games this year,” Michigan head coach John Beilein said. “But none like that. I haven’t seen that in practice even.”

Outside the Michigan locker room, Beilein was handed the Big Ten championship trophy. He looked at it and a smile broke out across his face. He posed for the cameras, just for a moment, then said, “I’ve got to give this to them.”

He passed through the locker room door and handed the trophy off to the players. The door closed behind him. But the whoops and hollers could be heard from the other side.

Moments earlier it had been a different feeling for Illinois’ seniors.

When Bertrand reached the last Michigan player in the handshake line, he doubled back across the court toward the tunnel. He strode across the block I and the outline of the state of Illinois at center court. The Illini fans were collecting their things and heading for the exits.

But most were still there.

Bertrand was almost at the baseline when he raised his hand in the air to salute the crowd. A friend sitting courtside in the Orange Krush signaled toward him. Bertrand walked to the sideline, and the friend gave him a hug. A few other Krush members slapped his hand and patted his back in congratulations.

His teammates passed him on their way to the tunnel. They walked out of the arena’s bowl unceremoniously and headed for the locker room.

Bertrand raised his hand in farewell one last time. He turned and hustled after his team through the tunnel. His knee seemed okay. He didn’t look back.

The fifth-year senior was gone.