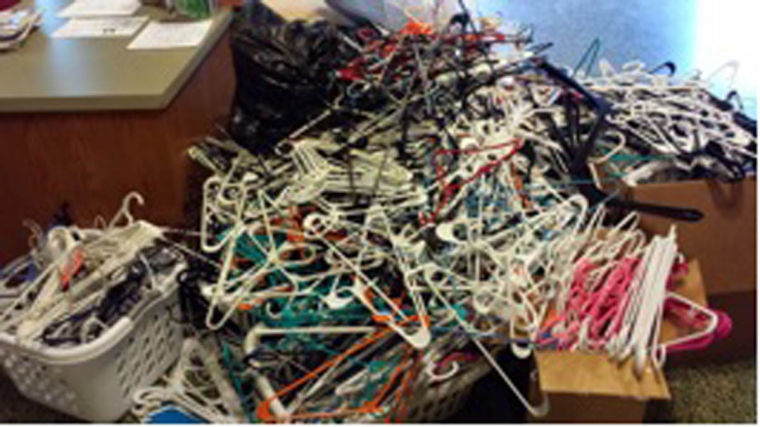 A mass of donated hangers for the YMCA's annual Dump and Run.

Each year, the University YMCA keeps six semi-trailers worth of items from ending up in landfills, thanks to a program called Dump and Run.

Dump and Run is an annual donation collection that allows students and community members to drop off unwanted items at the end of the school year. These items are then resold at the University’s Stock Pavilion from Aug. 23 to 24.

Kasey Umland is the project director at the University YMCA and has been volunteering with Dump and Run for 10 years.

“We keep a ton of stuff out of the trash, which is awesome,” she said.

Students could take their items to the YMCA, or to one of the 55 collection boxes set up in about 30 different locations, most of which were dorms. The boxes were pulled May 17.

For students and community members who missed the May drop off, they can still drop off their items directly at the Stock Pavilion during collection days in August.

Asako Kinase-Leggett, who works at the University’s Office of Diversity, Equity and Access, has been volunteering with Dump and Run for the past three years. She said she volunteers because of the great people and the good cause.

Some of the unique things people have donated in the past years include an alligator head, a full-length canoe and what Umland described as a teddy bear so big that it could wear a XXXL shirt.

Umland said what is surprising isn’t just the strange objects that are donated, but also the staggering quantities of certain items.

“A lot of it is just scale and these things that you don’t really think about buying, but then when you see how many we get, you think, ‘Wow,’” Umland said. “Like string backpacks — the world is full of string backpacks.”

When Dump and Run started, the August sale used to be held at the YMCA in Latzer Hall. Because the amount of donations has substantially grown over the years, the sale had to be moved to the Stock Pavilion.

“We keep a fraction of what is donated just because our sale is two days, and there’s only so much that we can get rid of in those two days,” Umland said. “But everything that we can’t keep, we donate to another not-for-profit that either gives clothes away or has a full-year thrift shop.”

The increase in donations has created a greater need for more collection locations and volunteers.

“This year we had Illini Tower and the dorms and we barely scraped by getting it all out on time,” Umland said. “The dorms wanted us to come back and pick up things that people left after we had pulled our boxes. We wanted to, but we just didn’t have the capacity. It’s definitely an all-hands-on-deck program that we can’t do without massive amounts of volunteers.”

An incentive for volunteers is after helping out for six hours, they get to shop early and have first pick at the sale.

Umland said the sale in August brings in about $20,000 for the YMCA. While she said that’s great for the YMCA’s programs, raising money is not the main purpose of Dump and Run.

“It’s great that it makes us money, but obviously we wouldn’t do it if it was just about the money,” Umland said. “There are easier ways to make $20,000.”

She said the greater purpose of Dump and Run is to keep usable things out of landfills and provide affordable items to students and community members.

“It definitely has a lot of facets that fit the YMCA’s mission,” said Umland. “We do it because we want to keep the stuff out of the trash. That’s the reason it’s worthwhile to do.”

“I feel like I’m contributing to being a steward of the earth,” Rauber said. “Right before the sale, I stand in the doorway, and I look around at all the stuff in all the departments and I think, ‘Wow, all this easily could have been thrown in the trash.’”