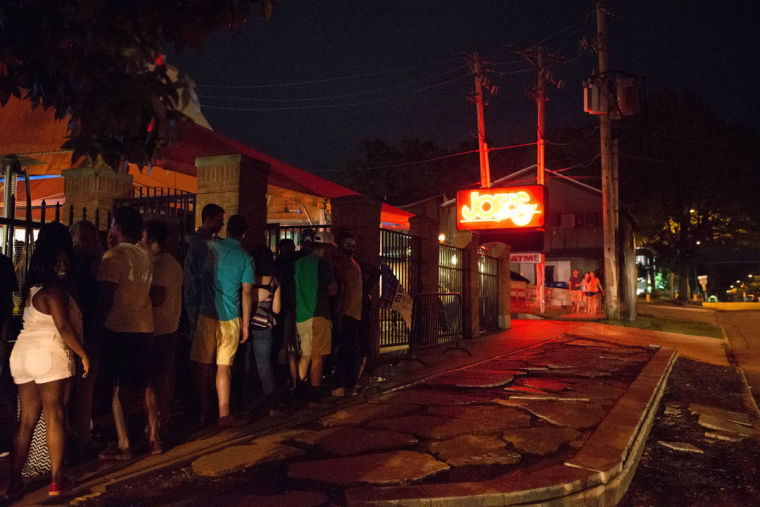 Many line up in front of Joe's Brewery during Greek Reunion on July 12, 2014. Each year, Greek Reunion draws many students back to Champaign during the summer season.

Regular Champaign bar-goers can now return to on-campus bars without the crowds, rowdiness and $5 to $10 covers that come with the summer annual Greek Reunion weekend.

Greek Reunion was hosted at the University this past weekend, starting on Friday afternoon and ending in the early hours of Sunday morning. The weekend-long event’s purpose is to unite University Greek system members together after weeks of separation during the summer.

Although the “holiday” may come off as problematic to some, University police were not worried about the return of Greek Reunion.

“We are aware of this weekend coming, and we are expecting more people to be on campus,” said University Police Department Capt. Roy Acree before the start of Greek Reunion. “We are used to dealing with more people. We will be able to handle any type of situation that we usually have on these type of weekends.”

Most of the on-campus bars took advantage of Greek Reunion weekend, with Red Lion starting festivities at 5 p.m. on Friday and 11 a.m. on Saturday. Joe’s opened at 7 p.m. Friday, hosting Chicago-based DJs Win and Woo, Papercha$er and New York headliners The Disco Fries. Similarly, Cly’s reopened just for the weekend after being closed through the summer.

By 10 p.m. Friday night, Green Street was flooded with students walking to the bars and waiting in long lines to enter the venues. Slurred conversations and screams could be heard from blocks away as students made their way towards Green Street.

“To Lion!” one student said enthusiastically passing by on Green Street.

“Joe’s!” another student on Green Street yelled back.

By 11 p.m. Red Lion was packed with Greek members and students, with minimal standing and walking room. The line to get into KAM’S was nearly 20 minutes long by 11:30 p.m., but noticeably less crowded and more comfortable once inside. Inside KAM’S there was room for students to move and dance, and conversations between friends were able to be held.

By 1:30 a.m. Saturday morning, the streets of Champaign were still crowded with students stumbling around and making their way home. But by 11 a.m., Red Lion was already open to start Saturday Greek Reunion festivities.

Red Lion hosted a variety of DJs all day, and opened a large inflatable water slide in their Beer Garden at 2:30 p.m. until 6.

By 9 p.m., the bars and streets were crowded with students once again. Lines for entering the bars remained long, with cover prices varying between the venues.

Although the line to get into Cly’s was short and the bar did not seem as packed compared to the others, one thing was unique about Cly’s — there was no cover.

“It was nice knowing there was one bar that I didn’t have to pay $5 or $10 dollars to get into,” said Rob Put, junior in Engineering. “I paid $10 to get into Lion. That’s crazy, considering I haven’t had to pay cover anywhere all summer.”

The small crowd covering the first and second floor of Cly’s remained through the night, with a more relaxed atmosphere compared to some of the other bars. Friends were seen chatting, laughing, dancing and embracing through the night.

Although Greek Reunion weekend came to an end, students continued talking about it late Sunday morning.

“Greek reunion 2014, I have nothing left,” said an anonymous Yik Yak user.