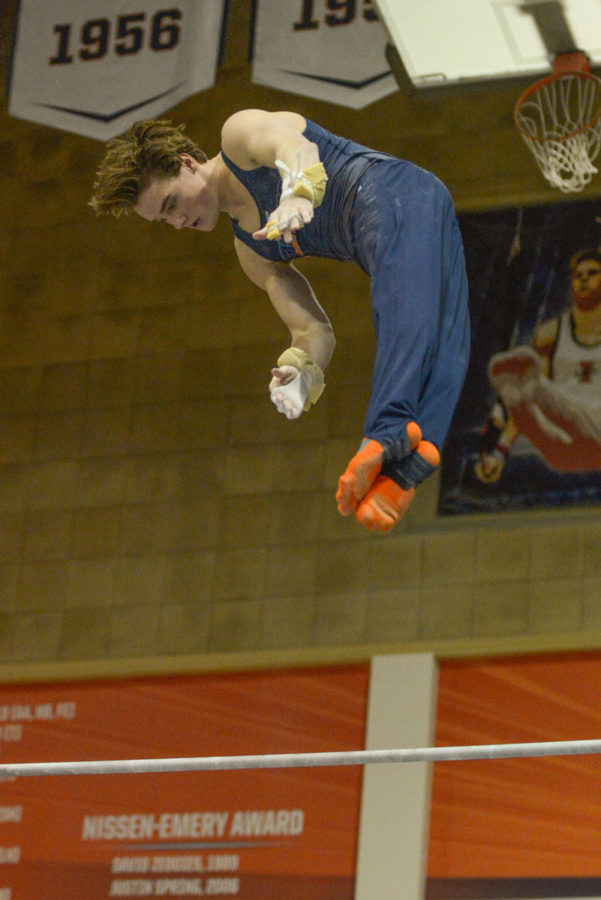 Illinois' Tyson Bull performs a high bar routine at the Orange and Blue Exhibition at Huff Hall on Sunday.

It was an afternoon of introductions, competition and humor Sunday at Huff Hall as the Illinois men’s and women’s gymnastics teams made their season debuts at the Orange and Blue Exhibition.

Gymnasts were divided into Team Orange and Team Blue, matched up in four rounds of five head-to-head competitions in each rotation. Team Blue came away with a 11-9 victory.

On the men’s side, coach Justin Spring’s team made its first appearance at Huff since finishing at the 2014 NCAA Championships and the program’s 12th straight visit to the NCAA team final.

Coach Kim Landrus and the women’s team are coming off their first ever back-to-back trips to Nationals. The team also finished a program-best 11th in the final national rankings.

The women kicked off Sunday’s event on the uneven bars as sophomore Sarah Lyons defeated senior Jordan Naleway. Lyons was one of 13 Illini making her debut at Huff Hall after taking a medical redshirt last season.

“It was an incredible feeling.” Lyons said of her first competition at Illinois. “I would never trade it. It’s great to get used to the competition equipment and to finally put on my orange and blue leotard for the first time.”

Although he had participated in smaller team competitions before, Bull said that he never had a full team experience like he is having at Illinois and thinks that the support can only help his performance level throughout the season.

“It’s a great way to showcase athletes in a way that you don’t get to usually see them in competition,” Spring said when asked about the Orange and Blue meet. “I think it’s fun to see people outside of their quintessential competitive game face. It’s good to allow them to have fun and perform and enjoy the moment.”

Junior C.J. Maestas definitely enjoyed his moment in the final round of action. Maestas approached his still rings routine in a puffy black winter vest. Seconds into his routine, Maestas dropped to the floor, stopped his traditional performance music and removed the top half of his Illini uniform. Sporting only a red bowtie he danced for the crowd and ultimately finished with a flawless still ring performance to Justin Bieber’s “Boyfriend.”

“I think C.J. is a perfect example of someone who is comfortable being a performer, but at the same time, he knows how to finish.” Spring said, “He had some of the most standout gymnastics of the night. He stuck his dismount cold. That’s what we’re looking for.”

Reigning high bar national champion, Jordan Valdez, had a rocky start to his final season with the Illini. He missed his first release move, causing him to belly flop to the ground, scaring both the crowd and Illini trainers. Valdez had previously dislocated his fingers that he said still bother him but does not think the injury is what hampered his performance.

“One thing or another, I don’t really need an excuse.” Valdez said. “I messed myself up, but I’ll be ready to go once UIC comes around.”

The men’s team will travel to Chicago to face UIC on Jan. 9, while the women will head to Central Michigan on Jan. 11 to start their regular season.

“Overall, I was somewhat surprised with what I saw today in a positive way.” Spring said. “With some of the routines, I have not seen some great hits with in practice, I saw them done well today. I think things are going well, and it gets everyone excited for the rest of the season.”

Lauren can be reached at [email protected] and on Twitter @MrozLauren.