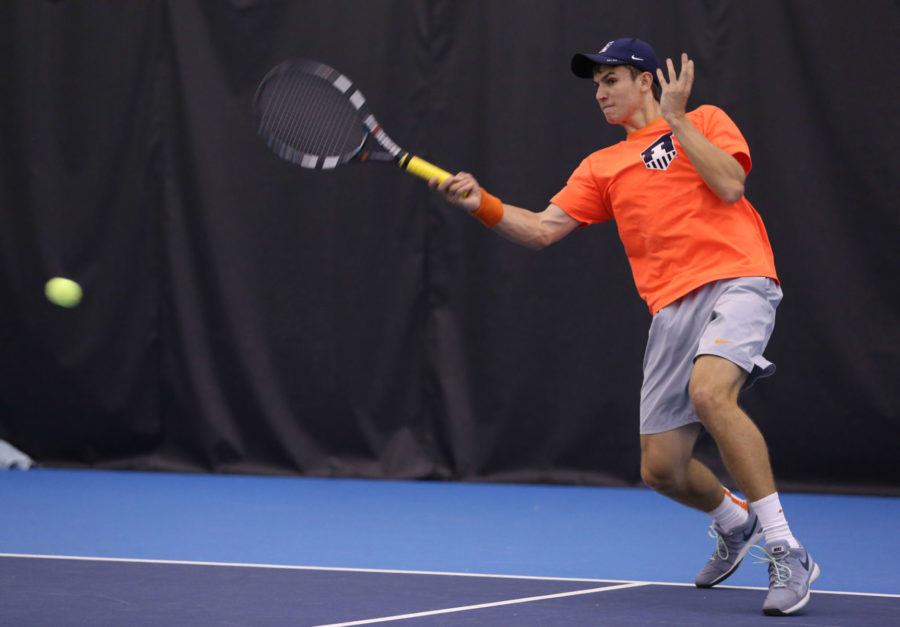 Illinois' Aleks Vukic attempts to return the ball during the match against Ohio State at Atkins Tennis Center, on Sunday, March 29. The Illini won 4-0.

Fans were yelling, the Bears were heckling, and his teammates were cheering.

As the freshman played the next point he looked over and saw senior Tim Kopinski about to clinch his match against Baylor’s Max Tchoutakian on Court 3. Vukic’s heart started beating faster in his chest. With Kopinski’s win, the Illini were tied 3-3.

It would all come down to the Australian on Court 5 to win the match.

Now Vukic could feel his stomach start cramping. What had happened? He had been the most relaxed member of the team before the match. He wasn’t at Illinois last year, so he wasn’t out for revenge. The Bears were the only team to shutout the Illini last year, and they did it twice — including in the Sweet Sixteen of the NCAA Tournament.

Nine months ago, Vukic had stood surrounded by silence.

On a dusty court in Reus, Spain, he was playing in a Futures match. Another match with few spectators in a “not nice” place in Europe. The only sound was the ball hitting the clay and muted claps from the sideline.

So how did he get here, to Waco, Texas, standing in a whirlwind of energy, with his heart ready to leap out of his chest?

One year prior to facing Baylor in Waco, Vukic met Illinois head coach Brad Dancer for the first time.

It was Vukic’s first visit to the United States. It had always been a dream of his to come to America — he had come for a Futures Tournament in Sunrise, Florida. Dancer was there to watch Vukic’s future teammate Jared Hiltzik, who took down Vukic in a quick 40 minutes. But Dancer liked what he saw from Vukic.

“He had a raw physicality to him,” Dancer said. “I feel like I do a pretty good job with guys that have good physical skills and coaching some of the nuances of the game. I felt that’s all he really needed.“

Dancer gave Vukic his card and told him to give him a call if he was interested in coming to Illinois.  Vukic was fresh off of graduation from Sydney’s Normanhurst Boys’ School. In Australia, the school year ends in December for summer break. Going to college in the United States to play tennis had been in the back of his head, but this was the first time it seemed like a real possibility.

“I always wanted to be pro. That was my main goal,” Vukic said. “Until January last year I still had my sights on pro tennis … I started thinking more about it and the more I thought about it, (coming to play American collegiate tennis) might have been a good idea.”

Playing college tennis in Australia wasn’t really an option. Vukic said that college sports are “non-existent” there. The same goes for high schools. Normanhurst wasn’t good at tennis, but in Vukic’s was “forced into” playing one season for the school.

Vukic’s goal was to play professionally, and that’s what he started doing after graduation. He played two tournaments in Florida that January and headed to Spain to train at the BTT Academy in Barcelona. After a month of tough training, he started touring around Europe with the academy.

It was unlike anything he had done before. He had traveled before, but only with his parents.

“I had nothing. It was just tennis by myself,” Vukic said. “Not really many friends, just because you’re touring with different people all the time, so you don’t have that much social life either. It was just tough being by myself.”

Vukic had a breakthrough at a tournament in Croatia, but he was thinking more and more about coming to the U.S. In June, Vukic returned to the U.S., this time not for a professional tournament, but for a visit to Champaign-Urbana.

“Everything was amazing. The facilities were unreal,” Vukic said. “Coming from an academy in Spain … it had more of an academic feel and it was like, ‘maybe this isn’t the best option for my tennis,’ but once I got here, I felt how serious everyone was … I thought they were really cool guys who were determined on tennis. I wanted an environment where everyone pushes ourselves, everyone has a similar goal.”

He committed to the University in July, about a month before the school year started. While tennis was all he did in Spain, he’s learned to balance his life at Illinois.

“Having too much tennis, just tennis, tennis, tennis, 24/7 is not good for the mind as well,” Vukic said. “It burns you out. I feel like the mix here helps a lot … My parents weren’t 100 percent set on the college idea, so I’m trying to prove them wrong a bit.”

College tennis has proved to be much different than the professional game, and Vukic has loved every minute of it.

From his very first tournament at September’s Southern Intercollegiate Championships hosted by the University of Georgia, Vukic has loved the crowds. He played Georgia’s Nathan Pasha and while the Georgia fans were rooting against him, Vukic was invigorated by playing in the atmosphere. The energy and the noise provided an incredible stage to play on. Vukic has shone on that stage.

“You’re on a team, and you know you’re on a team,” Vukic said. “I was coming in from no one cheering to everyone cheering, it’s like — wow this is great. It’s always better when they’re cheering for you; even so it’s just a great atmosphere… (Here there’s) almost a thousand people screaming. It’s unbelievable.”

He’s had a phenomenal freshman year, starting with his very first matches at the Southern Intercollegiate Championships, where he made a quarterfinal run. He had arguably the best fall of any Illini, highlighted with a eight-match streak at ITA All-American pre-qualifying and qualifying.

This spring, he’s 20-2 and ranked No. 74 in the country. Vukic has 42 singles wins the entire year, tied with Ryler DeHart for the most wins in a single season. And he has a chance to add to that total.

“He’s probably the one guy I feel comfortable saying he’s overachieved my expectations,” Dancer said. “I never have preconceived expectations … having said that, if you would have said that he was potentially going to break Ryler DeHart’s single-season record I would have not thought that was possible.”

His heart pounded, his stomach ached with the cramps. “Isn’t it hot in Australia? Shouldn’t you be used to this?” shouted one of the Baylor players. The cheering wasn’t for him, but Vukic embraced the energy.

He had battled in this match. Mate Zsiga, his opponent, was a grinder, but Vukic had matched him blow for blow. He had clawed back from match point and just took two points to take a 6-5 lead in the third set tiebreaker. He wouldn’t let it slip away, and the pressure proved to be too much for Zsiga, who double-faulted. Vukic was swarmed by teammates leaping towards him: Not bad for his first collegiate dual match.

This year’s NCAA tournament is hosted by Baylor. Vukic hopes that the January victory was just the first of several big matches for him and the Illini in Waco.