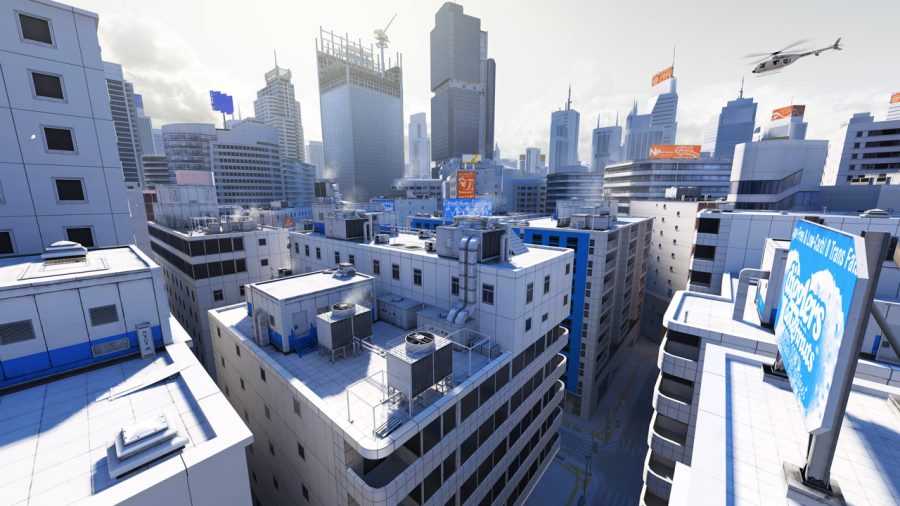 A screenshot of one of the maps from the first-person adventure video “Mirror’s Edge”. This 2000s parkour based game has a simple and futuristic style.

It was the era of SpongeBob reruns, slider-phones, Halo 3, American war atrocities, Netflix on the Wii and the sunset years of Blockbuster. It was a magical consumerism-fueled time and one of the greatest decades in terms of video games.

Some of my fondest, coziest memories of childhood were driving Fridays after school with my dad to the dying Blockbuster at the edge of town. I would rent two or three titles to enjoy for the weekend while always picking out my favorite Blockbuster garbage snack: a microwave popcorn bucket. That era was when one could enter and pick from the shelf a lineage of titles that were all genre-defining.

I will say outright the 2000s was the last era of gaming, where original big-budget titles were in full force. Titles like “Dead Space,” “Gears of War,” “Bioshock” and as reviewed today, “Mirror’s Edge.”

Developed by DICE in 2008, “Mirror’s Edge” is a first-person parkour game set in an American dystopia in the vision of Tim Cook. The world is a clean, primary color megacity that’s ruled under excessive surveillance and corporate corruption. You play as Faith, a delivery runner who works in the shadows, essentially a Jimmy John’s delivery driver from hell. Capable of taking a bullet, she embarks on a 10-12 hour quest to clear her family name after she and her sister Kate are framed for a political assassination.

The game revolves around parkour drive action, with Faith being able to scale walls and hurdle fences with ease. But this isn’t an Olympics event, rather a constant stream of fight or flight run-ins with the police. The game discourages head-on combat, rather providing a multitude of ways the player can dodge and outrun aggressors.

Boasting a beautiful yet minimalist art style, the city of “Mirror’s Edge” is captivating. Rooms are lit under a singular blue shade, night skies are drenched in neon pink and its amazingly detailed interiors are still impressive nearly 12 years later. It’s a metropolitan-sized Apple store.

Combine the looks with a stylish 2000s soundtrack, electronic music that would fit right on an iPod touch loaded with the Black Eyed Peas and the good-era of Pitbull. It’s a truly unique game world that has yet to be emulated.

It’s a shame that linear single-player games like this are a thing of the past. Bloated open-world titles designed with continuous grind and levels are now commonplace. The “Mirror’s Edge” 2016 prequel, unfortunately, followed suit and bombed in the process. It makes the heart hungry for titles that really pushed the medium, rather than desperately push to fit in.